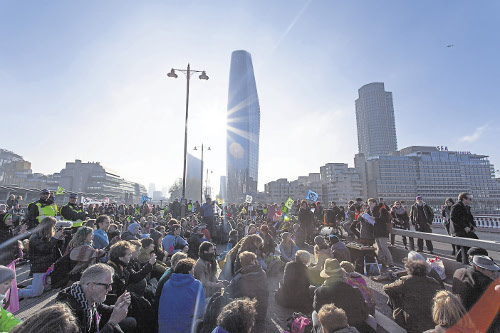 XR responds to criticisms around goals 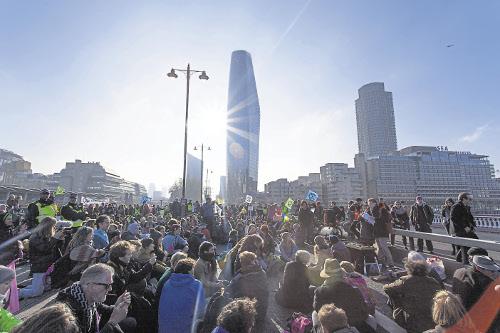 These are questions and answers taken from the XR FAQs (frequently asked questions) section. Some of them are responses to Gabriel’s
1 November criticisms.

Q: ‘Some people seek to mobilize people around a general concern, like climate or war or poverty, but such mobilizations are like one-off protests – they don’t win anything.’ [This is a quote from George Lakey, which Gabriel put in his 1 November essay on XR – ed] Care to comment?’

XR: Our understanding (from This Is an Uprising book) is that you can have both structural and prophetic demands and that both have their value. Structural demands (eg we want a 20-mile-an-hour speed limit here or we want to ban fracking) are more associated with the structure-based organising tradition of Saul Alinsky, Ella Baker etc and prophetic demands (we want civil rights) are associated with mass mobilising traditions. In training from the Ayni Institute, we learned that a hybridisation of both of these is the most effective path to take. Our Extinction Rebellion demands take that hybrid approach.

Q: ‘Why haven’t you got more tangible winnable stepping stone goals that would build moral[e] as you win?’

XR: We have. We say the government must reverse current policies inconsistent with acknowledging the climate emergency – there is much to be achieved there. For example, banning fracking and dropping plans for a third runway at Heathrow. And reversing their decision to crush renewable energy investment while doubling down on fossil fuels. A massive Green New Deal is absolutely vital, possible and necessary.

Q: ‘Your demands are vague, slightly confusing and perhaps even contradictory. Why do you think you can achieve them?’

n XR: This is probably because we have to write things down in short ‘soundbites’ that are communicable as headlines. There is much more detail underneath them. We are using cutting edge techniques to build a resilient mass movement. We know the task ahead is daunting and therefore that the likelihood of success may seem slim, but we are willing to do all we can to try and achieve this. Ultimately though, we are doing this because it is the right thing to do, in part we remain unattached to outcomes, meaning that although we hope we can save something of life on earth we try to stay motivated by action being the right thing to do (virtue ethics) rather than taking action because we think it will work (utilitarian ethics). However, the more of us that act on this basis in the face of the galloping global assault on our children’s futures, the more likely we hit the tipping point where the impossible becomes inevitable.

These FAQs were copied from the XR website on 19 November: www.rebellion.earth/faqs/