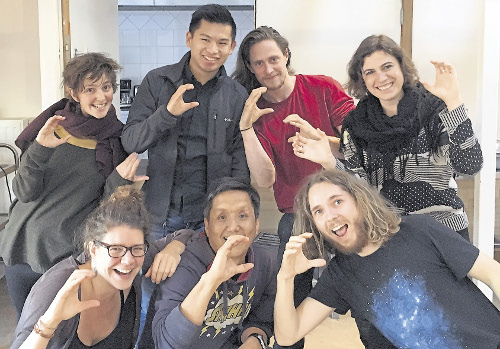 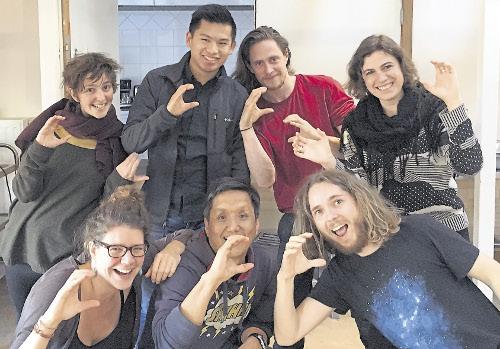 This diary describes one person’s experience of an international trainers’ exchange in Brussels from 12–17 November. The workshop was organised by three training collectives: Tractie (Belgium), Stroomversnellers (Netherlands) and London Roots (UK). It was fully funded (including participant travel) by an EU Erasmus+ grant. PN editor Milan Rai also attended.

Put 24 trainers from four different countries together for five days and you will get a lot of unexpected results.

It’s an irrational fear, because they are there to support you and will give you constructive feedback. But you hope that you won’t fail too hard, that you won’t have to return your trainer’s card – even though it’s not a real thing – and be expelled from the trainers’ profession.

The trainings for trainers week was focussed on collective learning, responsibility, experimenting, and how our mindset, language and even use of time are affected by the continuing influence of the colonial period.

The organisers invited Mama D from the United Kingdom to give us a workshop called the Food Journey. You sit in a chair, blindfolded, not moving for two hours. It sounds like a long time, but it felt like 30 minutes.

“I learned the most from the workshop about conflicts.”

We were exposed to the journey of African people from before colonial times to their forced capture, the travel via boat to and arrival in America as slaves. The sounds, smells and food from the various parts of the journey were distinctive and intense.

The workshop had an impact on me, thinking about the origins of food, the impact of fusion in food that is now considered as traditional food – such as tomatoes in Italian cuisine or potatoes in Irish cuisine, even though they are native to the Americas – and how our cultures are still affected by the colonial period.

Even though this was a heavy workshop, with lasting personal impact, difficult conversations and uncomfortable moments, we knew that we were all there to learn.

Guided by amazing vegan food made by our Belgium chef and his team – many people ate too much – we found the energy to continue with the programme.

It was funny to see how hard it was to get trainers to stick to the time limits, because everyone was so excited about learning and talking about every aspect surrounding the trainings.

The organisers thought it was a great idea to divide the participants into three swarm groups so that we could take responsibility for cleaning, the evening programme and the schedule/time-keeping.

Each group took their role in different ways, always with a serious but fun attitude. The group which I was part of – the Cleaners – got a bit excited and I think we were pretty intimidating with our strong group vibe. We even thought of our own yell, name and hand sign. I confess that it got a bit out of hand.

In the end, the week was about the workshops.

I learned the most from the workshop about conflicts. What are conflicts, how can you recognise them – because sometimes they are lingering under the surface instead of blowing up – and how can you deal with them.

For me, conflicts have always been something that I was trying to avoid. But learning how to deal with them and even learning that they can have their value in the process, makes them less stressful and scary. It makes it even a bit of fun to experiment with it.

The point of dealing with conflicts is figuring out what each person’s needs are, where they intersect and how you can try to meet their needs with co-operation and empathy so that you can resolve them.

It’s also nice to have a moment with your fellow PoC [people of colour] trainers and to discuss our own experiences, how we can learn from and support each other and perhaps collaborate on projects, to show that PoC trainers can help diversify the trainers’ community.

Coming back to my statement that giving trainings to peers are scary. During our homegroups – groups of four to six participants that talked with each other throughout the week about what they have learned and how other participants can support them – I talked about how scared I was beforehand about giving trainings.

The organisers had sent an email to participants several weeks before the training inviting us to give workshops. As a rookie in the trainers profession, I didn’t feel that confident about my skills and knowledge. But, as the week went by, I felt more confident and secure among my fellow trainers and saw how much I could learn from this experience. It’s not every day that you are surrounded by fellow trainers to learn from each other, let alone for five days.

That was a learning moment for me. We will all experience failures. But it’s about putting yourself in uncomfortable moments, finding learning points and having the attitude to improve yourself, that will help to get you to the next level.

Cleaners United! (I couldn’t let this opportunity pass of giving a shoutout to my group.)