October marked the 50th anniversary of a police riot, an unprovoked and brutal assault on a civil rights march in Northern Ireland 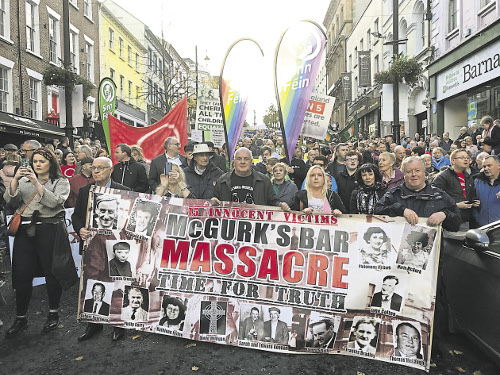 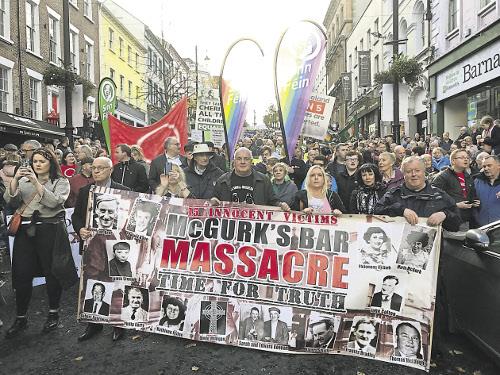 Part of a Sinn Féin march along the planned route of the 1968 civil rights demonstration, at the bottom of Shipquay Street, Derry, on 6 October. The banner refers to a UVF bombing of a pub in Belfast on 4 December 1971 which killed 15 Catholics including two children. The McGurk’s Bar Campaign for Truth is a family campaign to expose British state collusion with the loyalist attack. Photo: Robin Percival

1968 saw the beginning of what so many people euphemistically call the Irish ‘troubles’. Of course, Ireland has seen conflict and mayhem for many centuries, but the latest phase of the ‘troubles’ is generally seen as having begun on 5 October 1968. On that day, a couple of hundred peaceful demonstrators were attacked by the police (RUC) in the city of Derry, following a decision by the Northern Ireland home affairs minister (William Craig) to ban the march.

1968 was a turbulent year. Martin Luther King Jr and Robert Kennedy had been assassinated. Richard Nixon was one month away from being elected president of the USA. The Tet offensive had terminally shaken US confidence in Vietnam. French students had revolted against the regime of Charles de Gaulle. Czechoslovakia had been invaded by the Soviets and the struggle for socialism ‘with a human face’ had been crushed.

Then came the march in Derry, which very self-consciously modelled itself on the civil rights struggle in the US. ‘We Shall Overcome’, as in the US, became its abiding anthem. The Northern Ireland Civil Rights Association had been formed a year earlier and had agreed to sponsor the Derry march.

What no one anticipated, least of all the RUC, was that there would be cameras present at the march, which was scheduled to begin at the Railway Station in Duke Street. One camera was from the Irish national broadcaster, RTE, and within hours of the savage police assault the film was broadcast around the world.

“The strength of the civil rights movement was that it allowed the full breadth of nationalism and the Left, as well as a few unionists, to coalesce into a campaign for change within Northern Ireland.”

Four days later, the Derry Citizens Action Committee was established. This was the organisation which effectively ‘ran’ the civil rights movement in Derry. Its vice chair was John Hume, a local schoolteacher who later became a leading nationalist politician.

In Belfast, People’s Democracy was formed, drawing its support in the main from students.

Within a year, 11 people had been violently killed. British troops had been sent onto the streets of Derry and Belfast. Pogroms and large-scale population movements were taking place in Belfast.

By the end of 1969, the IRA had split and the Provisional IRA was growing in membership and influence. [The Irish Republican Army was an armed movement to throw out Britain and re-unite Ireland. In 1969, it split into the Official IRA and the more militant Provisional IRA. The Officials declared a ceasefire in 1972 and split again soon after, with the breakaway calling itself the Irish National Liberation Army or INLA – ed.]

Given the role of the 5 October march in triggering these events, it is not surprising that many people wish to commemorate and reflect on what happened.

But like so much of the history of Ireland, the events of October 1968 remain widely contested.

To begin with, the extent of the anti-Catholic discrimination which triggered the march is questioned or minimised by unionists. Even as I write, an article in a unionist newspaper, the Belfast Newsletter, by Graham Gudgin, a Cambridge-based academic, questions the degree and extent of discrimination.

Another tack which was advanced by unionists and loyalists 50 years ago and which still resonates is that the civil rights campaign was a plot by the IRA to destablise Northern Ireland.

This leads into another argument which has raged fiercely over the year leading up to the anniversary. How involved was the republican movement in establishing the civil rights movement and organising street action?

This is seen as being important (to some) because it is about who can claim to be the natural successors to the civil rights struggle.

The SDLP (Social Democratic and Labour party) suggest that they are the people who launched and led the civil rights movement. Certainly, they were undoubtedly there. One of the most telling (still) pictures from the 5 October march is of a bloodied Gerry Fitt, the Republican Labour MP for West Belfast, after he had been batoned by the RUC. Gerry was one of those who went on to form the SDLP in 1970 along with John Hume and others.

But there is also another telling picture.

Look at the RTE video (available online). As the march starts to progress towards the police line, you can see the young man on the left carrying the Civil Rights banner. His name was Johnny White. He was shortly to become the o/c (‘officer commanding’) of the Official IRA in Derry and later the adjutant general (number two) of the INLA.

Another still picture (not in the RTE film) shows a bloodied Martin Meehan, later the o/c of the Provisional IRA in Ardoyne, being led away under arrest by the RUC. (Both men died in 2007.)

The truth is that the strength of the civil rights movement was that it allowed the full breadth of nationalism and the Left, as well as a few unionists, to coalesce into a campaign for change within Northern Ireland.

Its central strategy was to force the British government (then led by Harold Wilson) to intervene and force democratic change on the unionist government.

Here in Derry, the anniversary in October was celebrated by a range of different activities organised by different political groups and tendencies.

It is significant that there was no attempt to agree a programme of activities across a spectrum of political opinions.

A large weekend ‘Civil Rights Fest’ was organised largely by members and supporters of the SDLP. The highlight was an address by the president of Ireland (Michael D Higgins) who spoke of his admiration for the early civil rights campaigners. Various gongs were distributed by him.

Notably absent were republicans who were not invited to speak or participate.

Several marches and rallies took place in Derry. The main one was organised by Sinn Féin (SF). This followed the proposed route of the 1968 march. 2,000 people were addressed by a gay rights activist, an Irish language activist and a woman whose father was murdered by UVF gunmen at the Loughinisland massacre in 1994. [The Ulster Volunteer Force was a loyalist paramilitary group that emerged in 1966. The group declared a ceasefire in 1994 four months after shooting dead six people they thought were Catholics, in a pub in Loughinisland – ed.]

This October, there was another much smaller rally in Derry with the theme of civil rights for the 21st century. Here again, the emphasis, like the SF parade, was on current issues such as abortion and LGBT rights.

It is perhaps a sign of the changes that have taken place in Ireland, that these now are the civil rights issues being addressed. The demands of the early civil rights marchers were achieved many years ago.

Robin Percival is chair of the Museum of Free Derry.