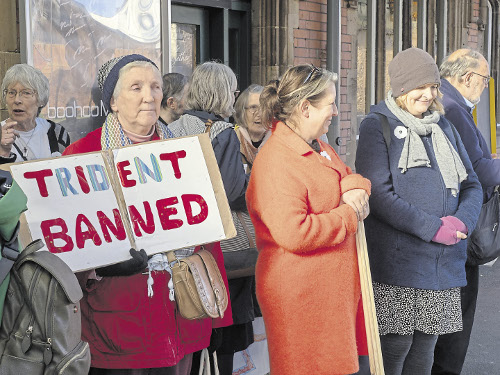 On 24 October, Aberystwyth peace activist Mary Millington travelled to Shrewsbury with messages for Theresa May, Jeremy Hunt and other MPs, writes Lotte Reimer. The locally-collected letters and petitions demanded that Britain sign up to the UN’s Treaty on Prohibition of Nuclear Weapons. Having picked up more signatures at stations along the way, handed over by local activists, Mary (pictured with her placard at Shrewsbury railway station) got on the ‘Peace Train’ organised by Hereford Peace Council to pass on her collection. Peace activists were riding a regularly-scheduled train along the border from North to South Wales gathering up signatures from across Wales for presentation at Westminster in an act of defiant hope for a future free of nuclear arms.