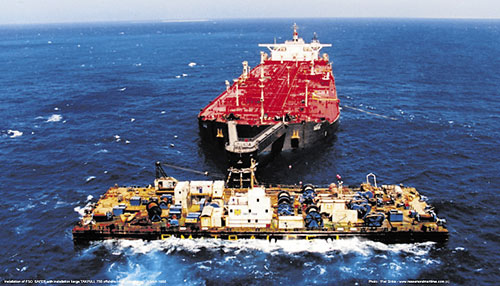 The FSO Safer being installed by a barge, the Takpull 750, five miles off Yemen’s main port, Hodeidah, in March 1988. PHOTO: PIET SINKE VIA FLICKR (CC BY-NC-SA 2.0)

However, the British state continues to arm Saudi Arabia, despite overwhelming evidence of Saudi war crimes since the kingdom began its military intervention in March 2015.

The British government’s violation of its own arms sales rules has forced the Campaign Against Arms Trade (CAAT) to continue its legal challenge, which goes back to the high court in London on 31 January 2023.

The US halted sales of ‘offensive’ weapons to Saudi Arabia in February 2021, but may resume them soon – in return for progress towards an end to the war, according to Reuters.

On another front, ‘Yemen’s humanitarian catastrophe is about to get much worse.’

That’s what a top UN official, Joyce Msuya, told the UN security council on 11 July. She added: ‘the truce alone will not be enough to stop what we fear is coming.’

This is partly because the UN’s aid plan for Yemen has only 27 percent of the funding it requires.

19 million people are in need of food assistance including 2.2 million children who are acutely malnourished. ‘Hunger is worse than ever,’ Msuya said, ‘and yet the World Food Programme was forced to cut rations for millions of people several weeks ago due to funding gaps.’

In 2021, the UK halved its aid budget for Yemen to £87mn. Even this is likely to be cut harshly by the halt to ‘non-essential’ British aid ordered in July.

The US-sponsored ‘truce’ (not quite a formal ‘ceasefire’) came into effect on 2 April.

Part of the background is that Saudi Arabia is pulling back from its aggressive policy of regional confrontation. Another part may have been worries in London and Washington DC about the growing Houthi cross-border attacks on Saudi oil infrastructure.

One part of the truce deal is that the Houthis must cease cross-border drone and missile strikes. The rebels must also open up road access to the city of Taiz in central Yemen.

In return, the Saudi-backed southern coalition have allowed a lot more fuel into the Houthi-held port of Hodeidah, as well as the first commercial flights in six years (to Amman, Jordan, and Cairo, Egypt) from the Houthi-held capital, Sanaa.

Another (unwritten) aspect of the deal may have been that Saudi Arabia agreed to throw overboard Yemen’s internationally-recognised (former) president Abed Rabbu Mansour Hadi – who the Houthis rebelled against in 2014.

Hadi, a Saudi client who supposedly gave the kingdom’s intervention in Yemen legitimacy, was deposed days after the truce started, on 7 April, handing over his powers to an eight-person ‘presidential leadership council’. (Middle East Eye says the Saudis threatened to expose Hadi’s corruption.)

Meanwhile, the UN has had to turn to crowdfunding to sort out the FSO Safer (pronounced ‘saffer’), an oil tanker filled with over a million barrels of oil, parked off Yemen’s coast as a storage facility.

The Safer has not been maintained since the war began, and could either blow up or sink, releasing an oil slick that would devastate Red Sea ecosystems, block the Suez Canal for months, as well as cutting off the vital Yemeni port of Hodeidah.

The Houthis agreed on 5 March (perhaps as part of confidence-building, leading to the truce) to allow international access to the Safer. The UN plans to drain the oil from the Safer, this will cost $80mn. So far, they’ve raised $60mn (including $7.3mn from the UK and $10m from the US). They’re making a public appeal for the remaining $20mn.

The spill from the Safer could cost $20bn to clean up.

The FSO Safer being installed by a barge, the Takpull 750, five miles off Yemen’s main port, Hodeidah, in March 1988. PHOTO: PIET SINKE VIA FLICKR (CC BY-NC-SA 2.0)