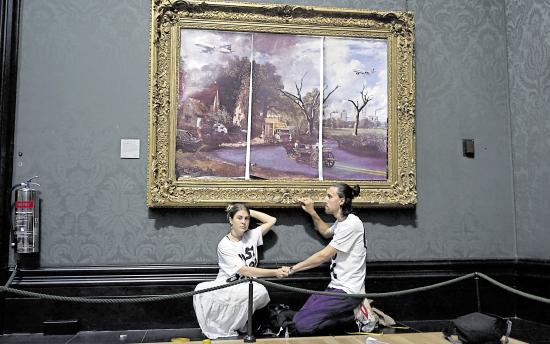 Hannah Hunt (left) and Eben Lazarus glue themselves to The Hay Wain in a Just Stop Oil protest at London’s National Gallery, 4 July. The painting has been covered with a JSO ‘nightmare version’. PHOTO: RICH FELDGATE/JUST STOP OIL

On 23 July, the ‘We All Want to Just Stop Oil’ coalition held a ‘mass swarming march’ in Central London. Groups set off from 11 separate locations, causing much traffic disruption, and all converging in Parliament Square for an authorised symbolic mass sit-down. Real Media, who filmed the event, reported that 1,000 people took part.

JSO is a new group, launched in February, but even in that time it has had people sent to prison. JSO activist Ana Heyatawin was sentenced to three months in prison at Stratford magistrates’ court, on 31 May, for contempt of court – for gluing herself to the dock when facing charges as a result of a JSO action.

In the run-up to the 23 July mass action, JSO had been concentrating on striking small-scale actions. This has included stunts in public art galleries in which two or more activists wearing ‘Just Stop Oil’ T-shirts have glued themselves to the frames of famous paintings.

The pictures chosen have included Horatio McCulloch’s My Heart’s in the Highlands, in the Kelvingrove art gallery in Glasgow (29 June); Van Gogh’s Peach Trees in Blossom, at the Courtauld gallery in London (30 June); Thomson’s Aeolian Harp, by Turner, at the Manchester Art Gallery (1 July); Constable’s The Hay Wain at the National Gallery (4 July); and a 16th century copy of Leonardo’s The Last Supper at the Royal Academy (5 July) – these last two in Central London.

At some galleries, red paint was sprayed on the floor and messages written.

At the National Gallery, activists also hung a full-size ‘nightmare version’ of the The Hay Wain from the upper frame of the painting. It included aeroplanes, a road filling the river, an abandoned car and a smoking factory. The National Gallery later said it had ‘successfully dealt with’ minor damage to the frame and ‘some disruption to the surface of the varnish on the painting’.

Outside the UK, on 22 July, climate activists from Ultimata Generazione (Last Generation) glued their hands to the glass covering Botticelli’s Primavera at the Uffizi gallery in Florence while displaying a banner.

Other actions by JSO have included activists throwing red paint over Queen Elizabeth House in Edinburgh on 2 June and over the Treasury in London on 13 June.

On 3 July, five activists in the JSO T-shirts sat on the track during the British Grand Prix at Silverstone after the race had been halted because of an accident.

Hannah Hunt (left) and Eben Lazarus glue themselves to The Hay Wain in a Just Stop Oil protest at London’s National Gallery, 4 July. The painting has been covered with a JSO ‘nightmare version’. PHOTO: RICH FELDGATE/JUST STOP OIL