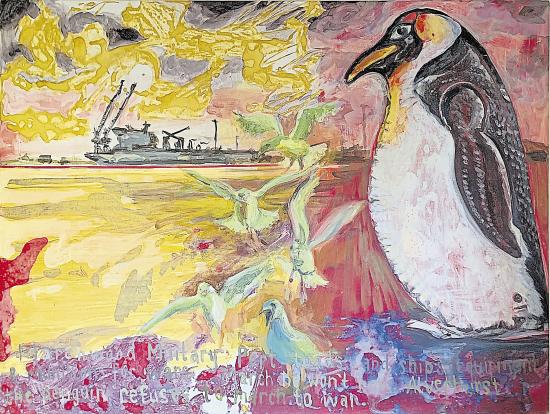 Alverhurst, so named by some college students when my partner Les was working with them around bullying issues, is an inflatable penguin. Alverhurst became a character representing disaffection, deciding for oneself and refusing to participate in the war machine; being a conscientious objector.

We would seek to understand and investigate Alverhurst’s stance and that of those around him, through a Theatre of the Oppressed-style dialogue in a local park and through zines.

Alverhurst had in mind the song by Phil Oakes: ‘I Ain’t Marching Anymore’. After Alverhurst visited Marchwood military port via bicycle trailer, he became very deflated.… He was later to be encouraged by, and joined by, a whistleblower, a cardboard penguin.

And so the tales continue, inspired by courageous war refusers and conscientious objectors.

At the time of making this painting, I was investigating home-made paint that was more ecological and not plastic like acrylic. Milk curds were separated from whey, and lime and pigment were added to the curds to make the chalky-looking washes. Acrylics also ended up getting used, too.

Lizzie Jones continues to paint and make art, including with Puppet Back Up, in Southampton, and to work as a gardener.  www.lizzjonesart.co.uk. Facebook: @PuppetBackUp