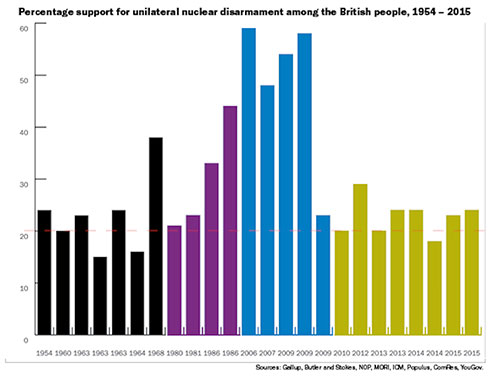 Opinion polls that I’ve found suggest that, throughout the nuclear era, at least 20 percent of the British people have supported unilateral nuclear disarmament, or something close to it.

These rock-solid people could be described as ‘Bruce’s tribe’.

Right now, that tribe would include around 10 million people over the age of 16 in the UK. (They’re not all in Scotland! Polls there have varied a lot, finding between 20 and 51 percent of Scots to be unilateralists.)

The diagram above shows the results from 24 UK-wide polls ranging from 1954 (just after the first British nuclear weapon entered service with the RAF) to 2015. The polls – by mainstream agencies such as YouGov, NOP and MORI – didn’t all ask the same question. Sometimes I’ve had to interpret the results.

For example, in the first poll used for this graph, in May 1954, Gallup gave people various policy options: 24 percent chose ‘we should not use atomic weapons in any circumstance’.

I think it’s reasonable to interpret that as 24 percent support for unilateralism because the next Gallup poll on this topic, in 1960, saw 20 percent of people agree that the UK should ‘[g]ive up nuclear weapons entirely’. Other Gallup polls gave similar results until 1963, when the figure rose slightly to 23 percent.

The fluid and the not-fluid

These polls, and all the poll results in the graph up to 1986, come from a 1989 academic study, ‘British Public Opinion and Nuclear Weapons’, by Hugh Berrington, who was then professor of politics at Newcastle university.

Berrington commented that responses to questions on nuclear weapons were ‘easily swayed by changes in wording’, confirming that ‘opinion on nuclear defence, as on many other questions, is not clearly structured’. He concluded: ‘Public attitudes on nuclear weapons are fluid, ambivalent and contradictory. Unilateralists have no grounds for despair, nor their opponents for complacency.’

In these shifting sands, I think the evidence shows a strong base of support for unilateral nuclear disarmament – of at least 20 percent of the British population (‘Bruce’s tribe’).

The polls also show, I believe, a very large persuadable middle ground, people who can be won over to disarmament relatively easily – but whose opinions have so far been ‘fluid, ambivalent and contradictory’, in Berrigan’s words.

Four polls in the 1980s (coloured purple in the graph) gave people a clear unilateralist option to choose from. For example, is it a ‘good idea’ for the UK to give up nuclear weapons ‘whatever other countries decide’? The percentage of support for unilateral nuclear disarmament in these polls went: 21; 23; 33; 44.

During the 2000s, questions were asked which loaded the dice, for example by stating the predicted cost of building a new nuclear weapon system and what this money could mean for schools. They were also not straightforward about unilateralism, talking instead of ‘not replacing’ Britain’s ageing Trident nuclear missile submarine system. ‘Unilateral-ish’ positions like this got large percentages of support (coloured blue in the graph): 59, 48, 54, 58.

Then, polls between September 2009 and March 2015 asked questions without prompts about schools, the end of the Cold War or the country’s dire finances.

They recorded much lower levels of support for unilateralism (coloured green), mostly in the 20 – 29 percent range.

For a complete list of polls used see here