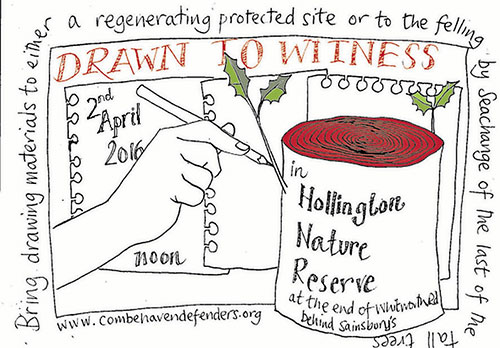 No 4 in our series about tackling SeaChange, a destructive quango in East Sussex

Despite the huge sums of money that had been thrown at SeaChange Sussex, most people in Hastings were unaware of its existence.

SeaChange, the private company which had received millions of pounds of public money to ‘regenerate’ Hastings in East Sussex, including building the much-hated Bexhill-Hastings Link Road (see PN 2658), preferred to keep it that way.

I once went to a ‘consultation’ about yet another new road that SeaChange was building across yet another piece of unspoiled countryside. There was really no element of consultation at all: locals were invited to write their opinions on bits of paper and post them in a box, which no doubt SeaChange would empty into the bin at the end of the day.

What struck me most was that there were several large glossy panels of information about the new road, but not one of them included the words ‘SeaChange Sussex’. There was absolutely nothing to tell people who was behind this exciting new project.

When I challenged the SeaChange staffer on this he said that who was building the road was irrelevant to local people, as long as it got built.

It didn’t seem irrelevant to me. In fact, it seemed utterly relevant that we should know who was getting the money to build the shiny new projects we didn’t ask for and in most cases don’t want.

It was time for people to know the truth about SeaChange. So, in 2015, I set up a WordPress.com blog under the name ‘Seachangewatch’. (WordPress.com is a popular, free-to-use, for-profit website-building and -hosting provider; it uses open-source WordPress.org software that is said to power 43 percent of all websites – ed)

I’d used WordPress.com before, for Combe Haven Defenders, a group set up in 2012 to try to stop the disastrous Bexhill-Hastings Link Road, so I had some idea of what I was doing.

Over the next few years, I wrote dozens of blogposts about SeaChange’s projects. Using the publicly-available minutes of meetings of the Local Enterprise Partnership (which funded most SeaChange schemes), as well as Freedom of Information requests, I was able to show the company’s utter incompetence.

Projects going wildly over budget and overrunning by years.

I set up a mailing list and sent out email newsletters encouraging people to object to the latest destructive project. Many people were starting to ask questions: why did this company get so much money, and why did its schemes almost universally fail to live up to the hype of the business case?

I went to my site, only to find that it wasn’t there.

That is to say, the website was there, but virtually all the content had vanished. Dozens of blogposts, hundreds of hours of work over many years, was gone. I’m not a techie person, and had not backed up the website.

I had assumed that, as it was on WordPress, it would all be fine – WordPress.com wasn’t going anywhere, was it?

I had drafts of some of the posts, and was able to find a few on the Wayback Machine internet archive website, but most were gone.

The loss of most of the content of the site meant that there was no longer a comprehensive source of fact-checked information about SeaChange. Nobody else, other than me, was going to spend hours poring over extremely-dull minutes of meetings, looking for that tiny nugget of gold which would expose the workings of this terrible company.

I couldn’t understand how this had happened. A friend with far more technical knowledge than me looked into it. It turned out that the person who had helped me set the website up had decided to move it from WordPress.com to another host – without asking me – because he thought it would give me better functionality (in fact, what I wanted was a very simple website and this one had all the functionality I wanted).

At some point, the new host had closed down, taking the content of my website with it.

To say I was upset would be a bit of an understatement. True, I should have backed it up, but it hadn’t crossed my mind to do so.

I managed to reconstruct some of the earlier blogposts, but it took a huge amount of time and my heart really wasn’t in it, so many of them are gone forever.

At the moment, I have 36 posts on the site, from 2015 to the present – but I have lost probably another 30. The site is still, I think, a hugely useful resource, and I get hundreds of visitors each month, but it is no longer a comprehensive study of SeaChange.

I don’t know if there’s a moral in all this. Maybe to always keep control of your own website. I’ve learnt my lesson and make sure I back up my blogposts now. We need as much information out there as possible about this rogue company.