Rebecca Subar, When to Talk and When to Fight – The Strategic Choice Between Dialogue and Resistance 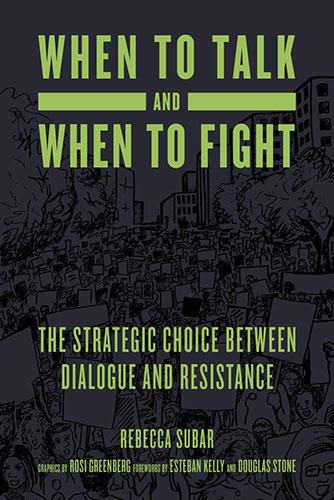 Rebecca Subar has written a great book. It is not complicated, has lots of stories, and is easy to read. It got better and better as I read through it. I remain inspired. But who is Rebecca?

Rebecca is ‘a transmasculine anti-Zionist able bodied white American Ashkenazi secular Jewish mom.’ She understands both privilege and vulnerability, she knows both being ‘up rank’ and ‘down rank’. This gives her insight and empathy with other vulnerable groups.

Professionally, Rebecca taught Peace and Conflict Studies at West Chester University from 2005 – 2019. Her well-crafted book shows that she knows how to communicate. Today, she is a senior partner at Dragonfly Partners [a multiracial band of social change consultants – ed].

Her big idea is simple.

Column A is problem-solving, negotiating.

It is joint and consensual. It is about working out a fair and enduring deal. However, too often, those down rank come to talks with up rank people at a disadvantage – they lack equal power. In their weak position it is almost impossible to negotiate a just deal.

In column B, people organise to fight, to build power, so they can come to the table as equals to negotiate a fair deal. To fight is a decision the less powerful make unilaterally. You don’t ask permission. You act to build power.

The problem is that most of us have a preference, a bias for either negotiation or fighting.

Rebecca argues that this leads to strategic mistakes. If negotiating is your default, then the mistake is to try and negotiate even from a weak position. The deal then is a failure.

If fighting is your default, then you keep fighting, mobilising, building power, but never actually choose to negotiate a fair and enduring deal.

There is also a Column C of vanquishing: overthrowing an opponent that cannot be trusted and whose acts are beyond the pale. Here it is revolution, overthrowing a Marcos, or a Pinochet, or a Hitler.

Rebecca’s commentary on her simple ABC model is perceptive, inspiring, and full of strategic wisdom. She uses stories really well. Her analysis of the Israel/Palestine conflict is brilliant and illuminating.

This book gave me greater clarity on when to fight and when to negotiate. I will be more effective because of it.