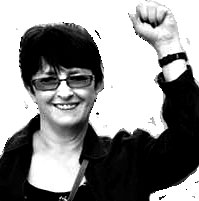 Why conscientious objection still matters in 2022

I’ve been a member of the International Conscientious Objectors’ Day organising group for a few years now.

The idea of having a stone dedicated to conscientious objectors to war (COs) began in 1976. After considerable efforts by Edna Mathieson, eventually the stone was unveiled at 2pm on 15 May 1994 in Tavistock Square, Central London. It was unveiled by the composer sir Michael Tippett, the president of the Peace Pledge Union (PPU), who had been imprisoned during the Second World War as a CO.

There’s been a ceremony on 15 May at the CO Stone in Tavistock Square every year since 1998.

This year was the first time we’ve all met in Tavistock Square in person since 2019, although there was a small group of us in the square last year to help produce a hybrid online-and-in-person event.

It rained last year. It rained again this year.

I realise now we should have specifically asked Bruce Kent to have a word with God to ensure good weather but... maybe next year.

This year’s event was hosted by actor and playwright Michael Mears and featured Semih Sapmaz from War Resisters International, also based at 5 Caledonian Road along with Peace News.

Semih is a Turkish CO and he spoke on the international picture of conscientious objection and he read out some messages from peace campaigners in Ukraine and Russia.

Actor Kika Markham read a poem and spoke of her father’s experience as a CO.

Israeli CO Sahar Vardi spoke of her experiences and why she felt she couldn’t let herself be conscripted, and why she’s now doing post-graduate research at Bradford University Peace Studies department.

Raised Voices sang a couple of songs and there was a minute’s silence which, for once, was not interrupted by sirens (plenty of traffic, though).

I was interested to see that one of the two police officers wandering around the periphery of the commemoration was reading (fully, it appeared) the programme produced by the organising group.

The programme features the lyrics of one of the songs written by Sue Gilmurray (‘The Ones Who Said No’) and a list of COs from all over the world, recent and historical.

The names range from Maximilianus, who was beheaded after his refusal to join the Roman army in 295 CE (he was later declared a Christian martyr) through to Edrenz James Do Ramos of Singapore, who is expected to be released in February 2023.

So, not just the First World War then.

On 8 March 1995, resolution 1995/83 of the United Nations commission on human rights stated: ‘persons performing military service should not be excluded from the right to have conscientious objections to military service’.

This was reaffirmed in 1998, when resolution 1998/77 recognised that ‘persons [already] performing military service may develop conscientious objections’.

At least 30 countries worldwide have conscription. Some countries, such as Turkey, refuse to recognise CO status. South Korea seems to have one of the highest rates of imprisonment of COs. TThe number in North Korea is, unsurprisingly, not known.

Despite this, the country still manages to imprison (in a military ‘corrective training centre’ for example) some of those who have become conscientious objectors after joining up.

There is no right to leave your job if you’ve signed up to join the UK armed forces.

Some have been imprisoned, such as Malcolm Kendall-Smith, an RAF medical officer who refused to serve in Iraq in July 2005. He was subsequently court-martialled and sentenced to eight months in prison.

Other UK army professionals have been quietly discharged after the armed forces realised that not all publicity is good publicity.

Other countries, such as Israel, have also seen people already serving in the military become ‘selective COs’ by refusing to serve on specific missions (in the Palestinian Occupied Territories for example).

The story of the CO Stone is told here: www.tinyurl.com/The-CO-Stone