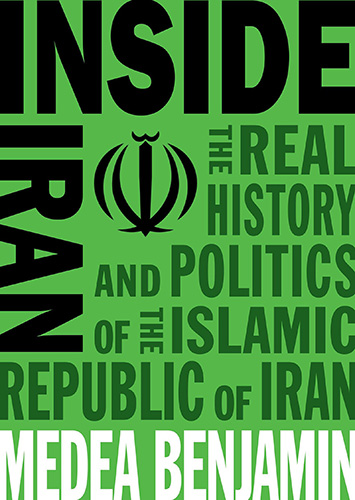 Things seemed quiet on the Iran front for a few months, but they might be about to heat up.

US president Donald Trump tweeted on 14 September: ‘Any attack by Iran, in any form, against the United States will be met with an attack on Iran that will be 1,000 times greater in magnitude!’

Whatever happens in the next few days, Iran and the US seem still to be on course for more confrontation.... Here’s a round-up review of books about Iran.

If you want an activist-friendly, easy-to-read backgrounder that will give you a sense of what Iran is like for women and LGBTQ folk, as well as a snapshot modern history, look no further than Medea Benjamin’s relatively recent Inside Iran: The Real History and Politics of the Islamic Republic of Iran (OR Books, 2018, 256pp, £13).

Benjamin, who visited Iran in 2008 and 2014, is a well-known US peace activist who has also written a critical backgrounder on Saudi Arabia (Kingdom of the Unjust, OR, 2016).

For Inside Iran, Benjamin says she wants to ‘highlight the pushback and heroic efforts by Iranians eager to live in a more open, more democratic society free of outside interference.’

She points out that Iran can only become truly democratic when it eliminates the position of the supreme leader ‘and the clerical bodies under his control’.

The supreme leader, who has more power than Iran’s president or any other institution in Iran, is a religious leader chosen by the assembly of experts.

This assembly is a group of 88 clerics elected by the general public – after they’ve been vetted by the guardian council, a body basically chosen by the supreme leader.

On the other hand, Iran is ‘one of the more democratic societies in the Middle East’, with elections for president and for parliament being ‘highly contested and unpredictable’, as Benjamin points out. (She also notes that people are only allowed to stand in elections if they have been approved by the guardian council, which rules out a lot of reformists.)

What Benjamin’s book doesn’t have is much on Iran’s nuclear history and the 2015 nuclear deal that lifted UN sanctions and limited Iran’s nuclear activities.

If you want to understand all the twists and turns of this, nearly up to the sealing of the deal, I recommend Gareth Porter’s Manufactured Crisis: The Untold Story of the Iran Nuclear Scare (Just World Books, 2014, 310pp, £28).

Yes, it’s dense with information, but it’s well worth the effort if you want to be able to counter the sea of lies about Iran’s nuclear power programme.

It is really important to know, for example, that it was US policy that forced the young Islamic Republic of Iran to turn to self-sufficiency and building its own uranium enrichment capability, the story Porter starts his book with.

For example, the US forced France not to sell nuclear fuel to Iran, in spite of Iran’s right to nuclear technology under Article IV of the Nuclear Non-Proliferation Treaty.

The heart of the book is Porter’s step-by-step destruction of Israeli and US propaganda claims about Iran’s nuclear power programme.

For me, the highlight is Porter’s painstaking examination of the ‘laptop documents’ supposedly stolen from Iran, which allegedly documented a secret nuclear weapons programme.

Among the many signs pointing to fraud was the fact that the nuclear warhead designs in the ‘alleged studies’ were geared to fit in the nosecone of Iran’s Shahab-3 medium-range ballistic missile.

As Porter points out, the earliest of these warhead designs from the famous laptop is dated August 2002.

We now know that Iran had decided as far back as 2000 to replace the faulty Shahab-3 with a different missile – with a completely different nosecone.

Why would Iran’s nuclear warhead engineers design it for a missile the government had decided two years earlier not to produce any more?

Out of all these Iran books, the one I enjoyed reading the most was the one written by a former CIA officer and a former US state department official. Flynt Leverett and Hillary Mann Leverett, a married couple, both worked in George W Bush’s national security council from 2001–2003.

Despite being published in 2013, Going to Tehran: Why the United States Must Come to Terms with the Islamic Republic of Iran (Metropolitan Books, 2013, 496pp, $24) is still timely and practical.

If you’re lobbying a Western politician, the arguments in this book could be really useful. They’re put together by US right-wingers and urge following the example of a very right-wing US president to normalise relations with an enemy state.

While Going to Tehran does not break with US propaganda, it does push at the limits. The Leveretts point out, for example, that the post-1945 US drive to dominate Europe, East Asia and the Persian Gulf ‘was not, as most Americans think, a function of the Cold War’.

The worldwide network of US bases and massive US military capabilities actually reflected ‘Washington’s determination to reshape the global order so as to ensure its own prosperity and dominance’, leading to a ‘unique form of empire’.

On Iran, the Leveretts argue (providing lots of evidence) that, contrary to illusions in the West: Iran acts rationally on the international stage; the regime has the support of most of the public; and the US will not be able to change Iran through sanctions and isolation.

These judgements aren’t just based on academic research. Hillary Mann Leverett was a US government negotiator with Iran between 2001–2003.

The heart of the book is the call for another ‘Nixonian moment’, as when right-wing US president Richard Nixon quite unexpectedly visited Communist China in 1972. This trip led to the normalisation of relations between the Cold War enemies, benefiting both countries.

A sort of lightweight, pocket version of Going to Tehran for the UK scene was put together in 2013 by former Daily Telegraph journalist Peter Oborne and Northern Irish commentator David Morrison: A Dangerous Delusion: Why the West Is Wrong About Nuclear Iran (Elliott & Thompson, 2013, 112pp, £8.99).

Among other things, the pair pointed out that then-Iranian president Mahmoud Ahmadinejad did not threaten to ‘wipe Israel off the map’ in October 2005.

Oborne and Morrison give a better English version of the phrase that Ahmadinejad quoted from Ruhollah Khomeini, the first supreme leader of the Islamic Republic: ‘this occupation regime must vanish from the page of time’.

In his 2005 speech, Ahmadinejad pointed out that Khomeini had accurately predicted the disappearance of the shah’s regime in Iran, the Soviet Union and the Saddam Hussein dictatorship in Iraq.

Oborne and Morrison write that the words Ahmadinejad used were ‘not a threat to destroy Israel by military actions, but the expression of a hope that the present Israeli regime will collapse, just as the Soviet Union did’.

Way back in 2006, former UN weapons inspector Scott Ritter published a rather panicky book called Target Iran: The Truth About the White House’s Plans for Regime Change (Nation Books, 272pp, £17.95), where he warned that ‘the world finds itself on the brink of another Middle East war’.

At the end of Dealbreaker: Donald Trump and the Unmaking of the Iran Nuclear Deal (Clarity, 2018, 302pp, £23.50), Ritter is more cautious on whether Trump might become ‘yet another American warmaker’. (Dealbreaker is actually mostly about the making of the nuclear deal, less than a third of the book deals with the Trump period.)

Curiously, you find out more in this book about Iran’s wide-ranging support for the 2001 US invasion of Afghanistan than you do in the Leveretts’ book, despite the fact that the couple were closely involved in the process at the time.

Kim Ghattas’s Black Wave: Saudi Arabia, Iran and the Rivalry that Unravelled the Middle East (Wildfire, 2020, 400pp, £20) tells the story of the Greater Middle East since 1979 in a way that is hostile to both the Saudi and Iranian versions of fundamentalism. However, not in an evenhanded way.

The bias against Iran shows up, for example, when Ghattas claims repeatedly that Iran ‘declared war’ on Saudi Arabia by using Hezbollah fighters to assassinate Lebanese politician Rafik Hariri.

But then, a few lines later, the former BBC journalist writes: ‘The assassination had been sanctioned by Damascus, and probably Iran’ (emphasis added). Does. Not. Add. Up.

If you want a more careful analysis of the complicated relationship between Hezbollah and Iran, you could turn to Iran’s Influence: A Religious–Political State and Society in Its Region (Zed, 2010, 280pp, £22.99).

It is 10 years old, but Elaheh Rostami-Povey provides crucial background to Iran’s relationships with Egypt, Iraq, Lebanon (home of Hezbollah) and Palestine.

Finally, the definitive mainstream history of modern Iran from the revolution in 1979 until Ahmadinejad in 2012 is Michael Axworthy’s wonderfully-written Revolutionary Iran: A History of the Islamic Republic (Allen Lane, 2019 rev ed, 544pp, £12.99).

Milan Rai co-authored Drawing Paradise on the ‘Axis of Evil’