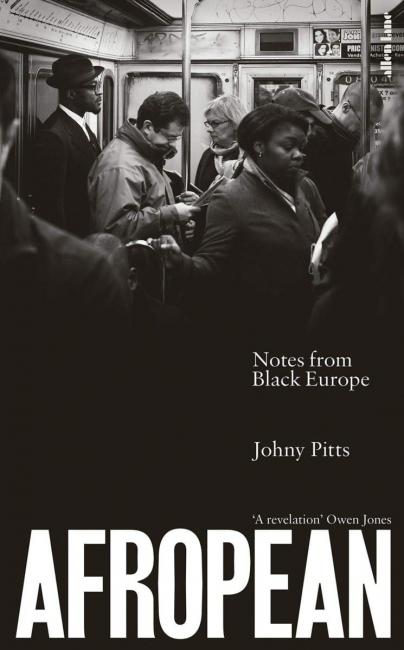 This book is the result of a five-month journey Johny Pitts made through Europe investigating the concept of ‘Afropean’ – that is, both African and European – culture. Travelling with a backpack, notebook and camera, Pitts followed in the steps of Caryl Phillips’s 1987 travelogue, The European Tribe, which effectively reversed the black gaze onto white Europeans.

Here, Pitts flips the concept on its head, specifically investigating black Europe in the 21st century. Each chapter focuses on a stopover: Sheffield, Paris, Brussels, Amsterdam, Berlin, Stockholm, Moscow, Marseille and Lisbon. Pitts is almost always in the city’s margins – Clichy-Sous-Bois on the outskirts of Paris, or Rinkeby in Stockholm, or in places of transit such as train stations and hostels..

Accompanying the text are Pitts’s candid black-and-white photographs, portraying black Europeans going about their daily lives: taking the train, waiting on the streets or sitting among friends. These evocatively shine a light on black Europe.

Although Pitts’s initial quest is to find some kind of unifying experience, the book’s multitude of portraits reveal the complexity of the black diaspora’s experience in Europe.

Faced with such plurality, Pitts comes to understand the concept of Afropean as ‘an opportunity to build bridges among various histories, cultures and people.’

Pitts’s own personal narrative underlies the book as he shares his meandering thoughts, doubts, fears and joys. Afropean starts with his own experiences of growing up mixed-race in a working-class area of Sheffield. Pitts’s personal anecdotes and meditations on identity, politics and culture make for an engaging read – as when he recounts his uncomfortable experience in the middle of an overly-white anti-fascist demonstration in Berlin.

Pitts has discussions with fellow backpackers, activists, students, bouncers, late-night workers, regular folk, friends, and strangers he meets by chance. Among them are Belgian-Congolese singer, Marie Daulne (whose band released Adventures in Afropea in 1993), and the Helmstetters, a mixed German-Israeli-Kenyan family living in Berlin.

Often, an encounter with a new person generates a deeper look into the particular history of the country in question. In this way, Afropean provides well-researched accounts of black histories and geographies.

Pitts explores, for example, how soldiers from colonised countries who heroically fought to liberate France from the Nazis were not recognised by the French authorities after the war and were instead shipped back to their countries as soon as it was over. They did not fit within Charles de Gaulle’s white narrative of the ‘French resistance’.

I would highly recommend this genre-bending travelogue which delivers a searing analysis of Europe through Pitts's clear gaze.

It will be particularly useful for white Europeans looking to engage with the colonial history and structural racism ingrained in their country.

The book is part of a larger network, including a website, which constitutes an important and fast-growing resource for Afropean communities to share and centre their stories, cultures, histories and identities.