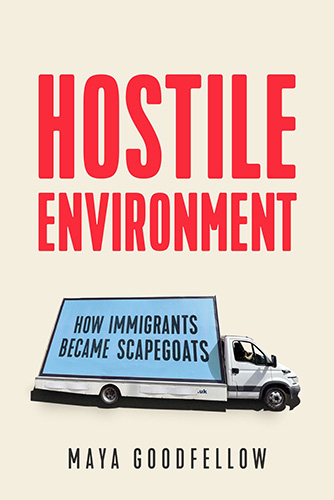 The UK immigration debate, an important issue in the Brexit referendum and recent elections, has distinctly altered during the COVID-19 pandemic. Public opinion now realises the huge debt owed to migrant workers keeping us safe, from doctors to bus drivers and shop assistants. In one recent poll, 62 percent of people supported offering automatic British citizenship to care workers and roughly half supported the same offer for supermarket workers, agricultural workers and delivery drivers.

In this book, academic Maya Goodfellow examines the background to the immigration debate, starting with Britain’s colonial past, before dissecting the ways in which government and the media have interacted with public opinion to form an anti-immigration politics.

In the first chapter, we hear from individuals at the receiving end of recent immigration policy. These are people who have missed out on life opportunities while waiting for the home office to make a decision on their status. Some have lost their livelihoods, or their health, or even their lives because of a lack of access to services.

The UK likes to see itself as ‘open to people fleeing conflict and persecution’ but, as Goodfellow points out, these shameful stories are not new but rather the consequence of a series of ever-tightening controls.

She refers to extreme practices such as ‘virginity testing’ of brides from Asia – which took place under both Labour and Tory governments and was only ended in 1979 – to show how the ‘hostile environment’ was present many decades before Theresa May first used the term.

At the heart of immigration policies, Goodfellow argues, is historical racism. Quoting philosopher Kwame Anthony Appiah (‘Race is something we make’), she explains how racism was invented to control populations and to justify colonialist expansion and exploitation.

Following the Second World War, both Labour and Tory governments first ‘implemented clandestine processes to keep out people of colour’ – people who, when they were from Commonwealth countries, actually had British nationality rights at the time.

When this failed to keep out the ‘wrong’ sort of people, the Tories passed the 1962 Immigration Act, which targeted people of colour, ‘in one fell swoop… shut[ting] out voucherless people from Pakistan, India and elsewhere’.

Labour then ‘reduced the number of vouchers available to migrants, extended powers to deport people deemed “illegal immigrants”… and imposed restrictions on who could be classed as dependants’.

Labour then passed the 1968 Commonwealth Immigrants Act, which began the process of explicitly demarcating British citizenship by race.

‘It is sometimes argued,’ the then-home secretary, James Callaghan, noted in a memo, six weeks after the 1968 act was passed, ‘that we can take a less serious view of the scale of immigration into this country because it could be, and currently is being, offset by total emigration. This view overlooks the important point that emigration is largely by white persons from nearly every corner of the United Kingdom, while immigration and settlement are largely by coloured persons into a relatively small number of concentrated areas.’

Goodfellow shows that most members of the UK public are not concerned that immigration will affect them personally, while horrified reactions to the Windrush scandal and the Grenfell disaster show that the British public are not always supportive of the government’s anti-immigration agenda.

The government and the media, Goodfellow suggests, both underestimate the potential for public opinion to change.

This book makes an excellent companion reading for anyone following the UK Black Lives Matter movement. It is a valuable resource, with good references for further reading, for understanding how the government and the media’s simplistic interpretation of public opinion have led to the creation of inhumane immigration controls.