What if they can’t keep a nuclear missile sub continuously out at sea? 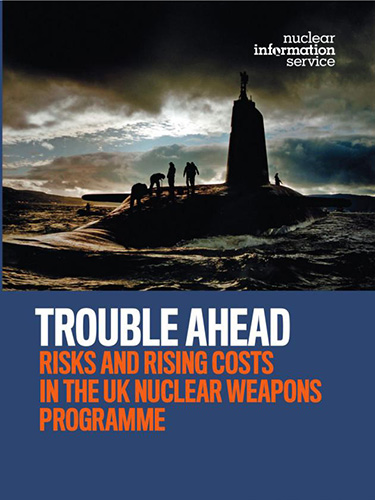 Our report, Trouble Ahead: Risks and Rising Costs in the UK Nuclear Weapons Programme (2019), grew out of the day-to-day work we’ve done.

It was an attempt to give an overview of where the UK is at with its nuclear weapons upgrades.

It’s not regularly admitted but in the early 2000s the UK took a decision to upgrade every single element of its nuclear weapons capability.

The new Dreadnought submarines are the part people know most intimately.

The Trident missiles themselves will be undergoing a ‘life extension programme’.

The new warhead was the last element that they’ve confirmed that they’re changing.

The idea of the report was to give an overview of how the different programmes fit together and the huge problems they’re having across the board in delivering these programmes.

We were also trying to cost the whole thing; that’s a constant issue in discussing this. Everybody’s got different figures.

Basically, the report said they are facing a trilemma.

They are facing a wall.

That’s not an issue that’s gone away for them. It’s still very live.

They’ve got what’s called an ‘integrated review’ which is going to be happening this autumn and it’s another attempt to square the circle between the quite unwieldy ambitions of the military planners and the view in the treasury that unlimited funding for weapons isn’t something that they’re willing to give.

One of the things I said in the report is there’s definitely a non-trivial risk for them that they have slowed things down so much and messed things up so much that they won’t be able to keep a nuclear missile submarine permanently at sea in the next decade.

If they deliver all of their projects on time and to budget, they might just get away with keeping a submarine permanently at sea until the Dreadnoughts come online.

But the entire history of the ministry of defence’s management of programmes suggests that that’s not likely to happen.

If they are actually not going to end up maintaining the nuclear posture that they say is absolutely necessary to the country, that’s something that everybody needs to address.

That failure opens a space for really serious questions to be asked about what the hell are we doing all this nonsense for in the first place.

Dave Cullen is director of the Nuclear Information Service: https://www.nuclearinfo.org