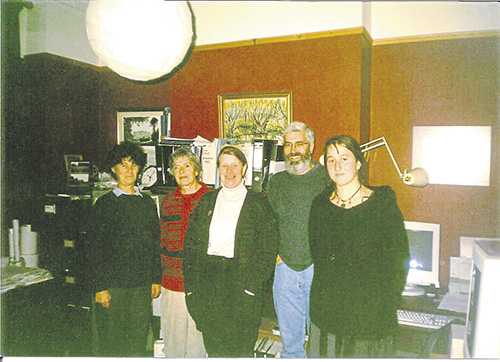 Shouldn’t there be someone keeping a close eye on the Atomic Weapons Establishment (AWE) which designs, manufactures and maintains Britain’s nuclear warheads?

Well there is someone keeping a very close eye on AWE and on Britain’s military nuclear programme as a whole.

It’s because of their focus that NIS (pronounced ‘niss’) was able to break the news in February that the British government were developing a new nuclear warhead for the Trident replacement submarines.

We interviewed David Cullen, director of NIS, and Duncan Barnet, NIS company secretary, about the organisation’s past, present and future.

DAVID: For those of us who think Trident replacement shouldn’t be going ahead, it’s very important to understand what is actually being done, and, as much as possible, where the points of intervention are to try to stop the replacement programme.

That’s where NIS fits into the work of local campaigning groups.

For peace campaigners, I think it’s really important for people to know, for example, that the UK might not be able to keep a Trident submarine at sea for the next 10 years. (See here.)

I think peace groups should be making the argument that, if ‘Continuous At-Sea Deterrence’ is not going to be happening, perhaps the whole thing’s not necessary after all.

We are available to talk at your peace group, we love doing that, and that’s a big part of why we’re here!

Even when it’s not big picture stuff, like nuclear missile submarines might not be going to sea, it’s very important to highlight if the nuclear weapon sites are not safe working places or if they are putting more radioactivity into the environment than they should be.

DUNCAN: A lot of this information is available, if you know where to look.

You’re keeping your eye on planning applications at Aldermaston and Burghfield, minor things that you see in the press – ‘the alarms went off at Aldermaston because there was a fire’.

It turns out that, in the case of the 2010 Aldermaston fire, somebody was handling explosives in an unsafe manner, in an area where they shouldn’t have been.

Obviously, the Freedom of Information Act has been an important tool that NIS has worked a lot on.

For example, NIS gained a copy of the incident log for the fire from the Berkshire fire service using the Act.

DAVID: This was before my time, but my understanding is that NIS was instrumental in making the public aware of the scope of the fire that went on and its implications.

Also, twice, we have made public that the office for nuclear regulation (ONR) had put into question the continued operation of the nuclear warhead assembly factory at AWE Burghfield – because of safety concerns.

That was in the late 2000s and again two years ago. Those were another two quite major things that NIS has done.

To be clear, a lot of what we do is finding information that is technically available to the public but, because it’s so obscure or it’s couched in such technical terms, the public isn’t really aware of it.

“A lot of what we do is finding information that is available but, because it’s so obscure or it’s couched in such technical terms, the public isn’t really aware of it.”

We find crucial information like this, hand it over to the press and make a big noise about it.

Back in February, the government were bounced into announcing that they were going to be building a new nuclear warhead.

They were bounced into the announcement because the new British warhead had been mentioned in the US, in an attempt by the US military to get congressional support for their own warhead upgrade programmes.

We were instrumental in that story coming into the UK press, and therefore in forcing the government to make the announcement.

How did it all begin?

DUNCAN: I was involved in Berkshire Anti-Nuclear Campaign, BANC as it was known, and through that got involved with Cruisewatch. I was what was called a ‘peanut’, a lookout.

That’s how I ended up meeting people like Peg Ridge, Evelyn Parker and Di McDonald. They were all involved in Greenham, one way or another.

The cruise missiles disappeared from Greenham in 1991, but just down the road from Reading, where I am, you have Aldermaston and Burghfield, where British nuclear weapons are built and maintained.

Di was aware that nobody was really looking that closely at what was going on there and keeping a watching brief on it.

Once Di started doing that work, she wanted to produce accounts so she could apply for grants for what was then called ‘NIP’ for the ‘Nuclear Information Project’.

I’m an accountant by trade, so I’ve basically been involved ever since then.

Eventually, Di decided it needed to be a bit more formal and, in 2000, we set up Nuclear Information Service as a company limited by guarantee. I’ve been the company secretary of NIS from the start.

DAVID: Duncan isn’t technically a director, but in terms of his input and duties he functions as a member of the board.

DUNCAN: One of the things that Di seemed to build on, I’m not sure what her religious position is, but the organisation has always talked about trying to work to Quaker principles, non-confrontationally.

NIS has built a reputation as a responsible organisation. We’re seeking solutions in a non-confrontational way.

We recognise that, even if we were to abolish our nuclear weapons tomorrow, we will still need AWE’s skills to decommission, to monitor the decommissioning worldwide, a test ban treaty and all that sort of stuff.

“There’s a huge question over how large, in terms of explosive power, the new warhead will be.”

Di got involved in one of the committees that was looking at the dismantling of nuclear submarines, as a civilian partner.

The royal navy have a number of nuclear submarines that are now redundant, but they don’t know what to do with them. How do you dispose of a dead nuclear submarine and particularly its reactor and its radioactive components?

Dreadnought is the name for the new Trident submarines, and the first one will be called HMS Dreadnought.

The last HMS Dreadnought was the UK’s first nuclear-powered submarine, and that’s still sat in Rosyth dockyard in Scotland awaiting disposal after being taken out of service in 1980! [There are 19 other retired nuclear submarines, split between Rosyth and Devonport naval base in Plymouth, Devon – ed]

One could take the view that perhaps they ought to have got rid of the first Dreadnought before they started making a new one, possibly!

As is typically the way with the MoD, their focus is fully on building their new things. Cleaning up after themselves, behaving responsibly, looking after the people who work for them, that’s all secondary.

We have a very good relationship with the nuclear regulator, the ONR.

They’ve got a chief exec who’s very keen on outreach. We go to biannual meetings and ask questions.

There’s a twin role. It’s partly useful for us in terms of information-gathering. The regulator’s documents are the only regularly-published updates on what’s happening in the nuclear defence sites.

A large part of what we do is keeping a close eye on those ONR reports and supplementing what we’re finding out from those and other open sources with freedom of information work and parliamentary questions.

At the same time, you’re also engaging with people and saying: ‘This should happen differently.’

We have a long-standing aim of trying to establish a standard where local NGOs will have representation at meetings held by nuclear sites where they meet with their parish and county councillors.

The ONR are responsible for safety and security at all of the ‘civil’ nuclear sites and also oversee most of the military sites, because most of them are partially in the hands of the private sector.

For the submarines when they’re at sea, and the nuclear weapons themselves, the MoD has their own pseudo-independent regulator, the defence nuclear safety regulator (DNSR), that in reality is just a department of the MoD.

I think because the MoD have an issue with their submarine reactors, they’ve started hiding DNSR reports, and now they won’t let them anywhere near the light of day.

We are awaiting a freedom of information tribunal ruling on that, it’s been delayed because of COVID.

DAVID: Our plan for the next couple of years will be looking at the new warhead for the Trident replacement programme. We’re looking at funding bids for our work that will start next year.

I’d like to nail as much as is possible what the government might be planning to do.

As I mentioned before, this whole thing came to light because the US was talking about how closely linked our warhead will be with theirs. I think there’s a lot of really fruitful points to be made about how intertwined the two programmes are.

There’s also a huge question over how large, in terms of explosive power, the new warhead will be.

The US warhead, that is a parallel development, is almost certain to be much larger in terms of explosive yield than the current UK warhead.
Beyond that, we need to do our own planning, but these upgrade programmes are going to be running for decades.

The government doesn’t now publish an official end date for its Dreadnought submarines because they’ve messed up their project management so badly. They don’t have an official in-service date for the first submarine, they just say ‘the early 2030s’.

We’ll continue to monitor these programmes and to publicise them and to look at where things are going wrong and what possible intervention points there are for the disarmament movement.

As part of our 20-year anniversary, we’re re-launching our website that will be going online in the next few weeks (I won’t tell you an exact date in case it moves slightly further back!).

Part of the new website will have a document library, there’s a cache of documents relevant to the Trident replacement programme.

We are also planning in the next few months to fundraise to digitise John Ainslie’s archive to add to the online document library. John was one of the best researchers on nuclear weapons operations in the UK. I know there’s some invaluable information in his research archive, documents that aren’t available elsewhere.

We’ve been really lucky that we’ve been able to survive this long.

We are facing quite a make-or-break moment in terms of our core funding.

I’m hopeful that the good work that’s been done over the last 20 years will be enough of a springboard to get us through this rocky period, but it will be tough.

DUNCAN: We should emphasise that we’ve been very grateful to all those who have helped fund us.

The Nuclear Information Service website has been completely redesigned to enable faster and easier access to important information. It also has a new, searchable, document library, funded by the Nuclear Education Trust. It hosts important policy, technical, and historical documents about the UK nuclear weapons programme and provides a resource for researchers and the public. It includes documents which may have been deleted from their original source, and Freedom of Information documents which may not be available elsewhere. NIS will continue to add important documents and is fundraising to digitise the late John Ainslie’s valuable archives. www.nuclearinfo.org