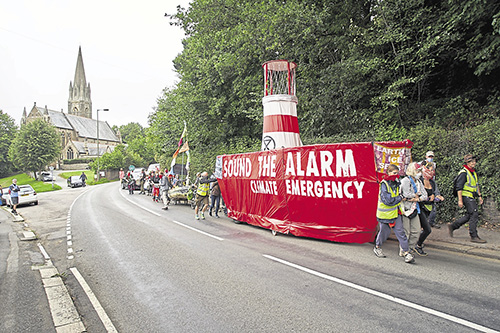 The Lightship Greta being pulled (and pushed) from Crawley to Redhill on 2 September, en route to London. PHOTO: XR SOUTH EAST

One part of the mass of XR actions

There were protests all over the UK marking Extinction Rebellion’s fortnight of climate action in the first half of September. This included blockades of News Corps printworks that produce Rupert Murdoch’s Sun, Times and other newspapers. Kevin Blowe, co-ordinator of Netpol (the Network for Police Monitoring), commented on the heavy-handed policing of XR in London: ‘The suspicion remains that the Metropolitan police see all XR supporters as “criminals” and are judging them not on their individual actions, but by their association with a movement that officers perceive as “illegitimate”.’ Here’s one action from the ‘UK Rebellion 2020’.

On 30 August, the lightship Greta (a life-size-model-boat-cum-lighthouse-on-wheels) and about 40 Extinction Rebellion (XR) crew, myself included, set off from Brighton. Our destination was the East End of London. At over 60 miles, it was an audacious project.

Pushing a lightship to London, at a rate of about 11 miles a day, was difficult but possible if we all pulled together.

“Tackling climate change is difficult but possible, if we all pull together.”

Our aim was to show that tackling climate change is difficult but possible, if we all pull together. Along the way, we took turns to push and pull Greta, to direct the traffic and to play samba.

We pushed and pulled her through small villages and towns, up and down hills, in good weather and in bad, to waves and smiles from bystanders and mostly tolerance and supportive beeps from motorists.

In the evening, local supporters welcomed us to the places where we would stay the night: a cricket ground, a church, a scout hut, a school.

And these supporters also provided us with food to supplement the provisions supplied by the group ‘Food For Free’, who followed us on their electric tricycle. In the evenings and mornings, we would meet to discuss and make any decisions necessary.

One evening, we were miraculously given safe haven by a traveller community for the evening after randomly stopping by their gate to discuss whether we had enough energy to get to our planned venue (which was still over two miles away) in the rain and increasing darkness.To our great relief, we were able to camp and sing and tell stories around a fire.

During the first part of our journey, the police mostly ignored us, but once we had passed under the M25 we were followed by three police vans.

On the sixth day, Friday, we were joined by other samba players, as we processed through southeast London, finally arriving – with great relief and much excitement – in Brixton. On the Saturday, the police promised us that we could go to our final destination. It was not to be.

In Kennington, also in south London, we were stopped by 200 officers (a massive overreaction for a small, peaceful demonstration).

Greta was impounded and three people were arrested.

The grounds for stopping us were breaches of COVID regulations, although we wore masks and were socially distanced until the police vans drove up behind us.Although motorists were sometimes frustrated and angry at being delayed, on the whole we received a positive response. I think it was the right decision to concentrate on outreach in the small towns and marginalised communities of London, rather than the centre of power.

The crew pulled – and made decisions – together and formed a strong bond on our ‘pilgrimage’.

At all times, we behaved in a peaceful (although not necessarily silent) and respectful manner. But now, it seems, our right to peaceful protest is under threat, using COVID laws.

In the end though, it was all worthwhile and I feel inspired at what a small group of people can achieve with peace and love for the planet and its inhabitants in their hearts.

The Lightship Greta being pulled (and pushed) from Crawley to Redhill on 2 September, en route to London. PHOTO: XR SOUTH EAST