Astra Taylor, Democracy May Not Exist But We’ll Miss it When It’s Gone & What is democracy? 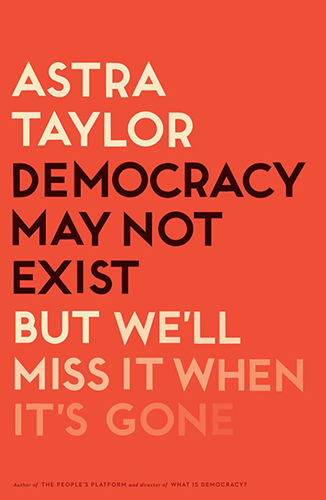 Is the pursuit of equality essential to democracy or its mortal enemy? And if democracies are governed (as the preamble to the United States constitution suggests) by ‘we the people’, who gets to be part of that ‘we’? Would choosing our politicians by lot (as happened in Ancient Greece) actually be more democratic than voting?

These are just a few of the questions tackled by the activist and film-maker Astra Taylor in her latest book: ‘an invitation to think about the word democracy from various angles, looking back through history and reflecting on the philosophy and practice of self-rule in [the hope] that a more contemplative view will shed useful light on our present predicament.’

Though perhaps best known for her 2009 philosophy documentary, Examined Life, which features nine contemporary thinkers talking while on the move, Taylor was also involved in launching the first student debt strike in history. The 2015 strike won over a billion dollars in debt relief and a change in federal law that made it possible for defrauded students to discharge their loans.

No surprise, then, that her latest work is a politically-engaged exploration, taking us far beyond the idea that democracy just means periodic elections, civil liberties and legal equality.

Structurally, the book focuses on eight ineradicable ‘tensions’ that must exist inside any democracy, such as the need to balance the rights of those in the present and those of future generations (tradition, GK Chesterton quipped, ‘is the democracy of the dead’).

The film, on the other hand, takes a more circuitous path.

I would strongly recommend watching the film first, and reading the book afterwards, as the two experiences definitely reinforce one another.

Both place ‘the insights of schoolchildren, doctors, former prisoners, workers and refugees alongside the likes of Plato, Locke, Rousseau, Madison and Marx partly to underscore people’s tremendous and mostly untapped capacity for reflection’.

Especially moving are the interviews with Latina co-operative member Eulalia Francisco – who breaks down when asked about the Trump administration’s stance on immigration – and the poet and barber Ellie Brett, who talks eloquently about being part of a hunger strike to save a prison library. ‘I know, for my heritage, it used to be illegal for us to read’, Brett tells Taylor.

Elsewhere Taylor has written that two philosophers who appeared in Examined Life, Slavoj Žižek and Judith Butler, have both left a mark on her thinking, yet she herself shuns wilful obscurity, writing both clearly and accessibly.

Moreover, the range of evidence that she brings to bear on the topic is very wide indeed.

She takes in, for example: the ways in which honey bees make decisions about swarming (every bee has a chance to be heard [no pun intended] and every bee is an expert on the task in hand); the democratic nature of many pirate communities in the early 18th century (‘they are, on Occasion, all Captains, all Leaders’, one of their captives marvelled); and the elite-driven Proposition 13 Tax Revolt of the 1970s (a ‘major turning point in American politics’ that I for one had never heard of).

Other standouts include: New York Times columnist Thomas Friedman’s highly-revealing praise for the political-economic ‘Golden Straightjacket’ of globalisation, whereby ‘political choices get reduced to Pepsi or Coke’ and deviant governments are punished by the financial markets; the horrifying story of Bhutan’s top-down transition to ‘democracy’ (which only took place after the section of the population that had been most vocal in demanding it – namely, the ethnic Nepalis known as the Lhotsampas, who comprised one-sixth of the population – had been forced into exile); and the true story behind the US legal system’s granting of ‘personhood’ to corporations (this originated not in a formal legal opinion but in a claim by a ‘lowly court reporter’ about a ‘passing comment’ made by one of the chief justices during a case involving the Southern Pacific Railroad company).

Greece – both ancient and modern – is a major touchstone for both film and book, though the latter also focuses on the much-less-well-known Native American contributions to democratic history.

For example, the Haudenosaunee Confederacy – which dated back to the 14th century – was a major inspiration for the United States ‘founding fathers’, though, as Taylor notes, while the American constitution was silent ‘in regard to half of the human population, nearly one quarter of the clauses that compose the [Confederacy’s] Great Law of Peace pertain explicitly to the power and role of women.’

In her introduction, Taylor confesses that, for most of her life, ‘the word democracy didn’t hold much appeal’ and that she much preferred other words, such as ‘justice’, ‘equality’ and ‘socialism’.

Today, she writes, when a growing number of people seem to believe that democracy is dying, a belief in democracy ‘as a viable project of collective self-rule is, in itself, a radical act.’