Patrick Cockburn, War in the Age of Trump: The Defeat of Isis, the Fall of the Kurds, the Conflict with Iran 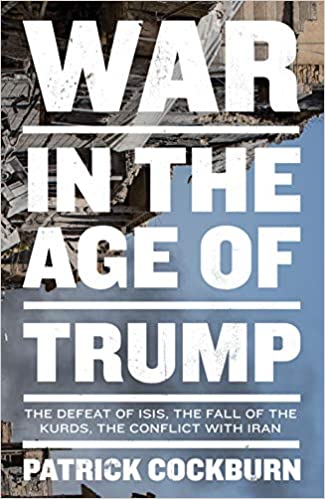 Currently writing for the Independent and the London Review of Books, Patrick Cockburn is one of the most experienced foreign correspondents working in the Middle East today.

His latest book is largely made up of short-form reportage based on writings and diary entries at the time of the events being covered, alongside some contextualising retrospective explanation.

Covering the first term of the Trump administration, which Cockburn argues has been populated by an unusually high number of dangerous people, the book’s strength lies in its on-the-ground journalism. ‘I have tried to give voice to what the Syrian, Iraqis and Kurds felt about events as they unfolded around them,’ he writes.

Cockburn regularly notes the complexity of the fighting in Iraq and Syria, describing the latter as having ‘the feel of medieval Italy’ where ‘every city and town had its own distinct politics, along with some powerful foreign sponsor.’

In Syria alone, the list of nations involved in the conflict is huge: Russia, Iran, the US, the UK, France, Turkey, Israel, Qatar and Saudi Arabia being the main actors.

There is much of interest to peace activists in the book. For example, those who wonder if Western air strikes were the only option for dealing with ISIS will be interested to read that NATO member Turkey allowed around 40,000 ISIS fighters to cross its border into ISIS territory.

Cockburn is also keen to highlight the skewed, propagandistic nature of much mainstream news reporting of the wars, noting ‘copious media coverage of civilian casualties caused by Syrian and Russian airstrikes’ in Aleppo and Ghouta (both in Syria).

In contrast, there has been ‘near silence… amounting at times to a media blackout’ about the similarly huge number of civilian casualties caused by US–UK air strikes in Mosul in Iraq (2016) and Raqqa in Syria (2017).

Visiting Raqqa after ISIS were defeated, he describes the ‘universal destruction’ as ‘similar to that of the carpet-bombed German cities in the Second World War.’

Elsewhere he notes the Western powers have ‘stoked’ the war in Syria ‘year after year’, supporting the armed opposition to the Syrian government, which has been ‘dominated by various Al-Qaeda clones’ since 2013.

Frustratingly there is no bibliography or footnotes, though arguably the first-hand nature of Cockburn’s reporting means these are not essential. This is a small gripe about an accessible, often engrossing, introduction to the ongoing conflicts in the Middle East which should be of central concern to anti-war groups and activists in the UK.