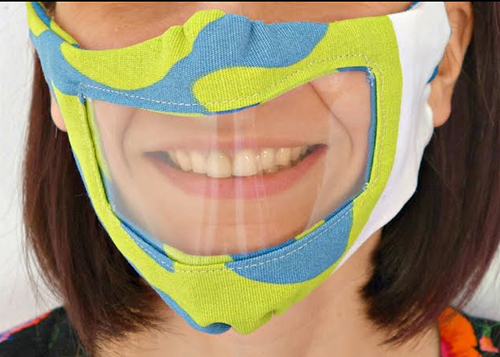 More inclusive masks: People with hearing loss are finding life harder because of face masks (which have become compulsory in lots of places). There are 12 million deaf or hard of hearing people in the UK. How to make the mask: www.tinyurl.com/peacenews3

The pandemic has broken down barriers for some activists

Doing politics outside of our ideological bubbles was never going to be easy. Between excluding people and/or leaving in an over-dramatic way, on the one hand, and staying silent in the face of irrational, immoral or even malicious views, on the other, lies the thorny territory of discussing, questioning and challenging.

Radical academic Paul Chatterton has a name for interactions between dedicated activists and non-activist communities: encounters on ‘uncommon ground’, recognising the need to ‘give up activism’ to learn how to communicate and act in different contexts in order to shape and effect genuinely collective social change.

Working at grassroots level, Ross Chrisdale reminds us that political activists cannot engage in mutual aid in communities beset by a pandemic as if they were doing politics among their peers in collectively-constructed social spaces:

‘We – especially those of us who are less impacted by the various toxic and oppressive ideas that are floating out there in our neighbourhoods – are going to need to find ways to be patient and to talk through some pretty major differences, rather than immediately banning or excluding folks ’cause they think we need the police to protect us from irresponsible neighbours, or because they think 5G causes COVID19.’

Another UK-based activist, Anna Kleist, comments on the need to invest mutual aid with a feminist ethic of care, to recognise that caring is a political act:

‘Too many times over the last few weeks I’ve seen comrades flouncing out of WhatsApp groups because they “aren’t interested in being involved in a group that isn’t explicitly political”, as if caring for (and with!) those deemed “expendable” isn’t in-and-of-itself vital work, as if they wouldn’t associate themselves with people who don’t automatically think like they do. In giving in to these puritan impulses (which exist in many of us, myself included) we not only doom ourselves to irrelevance, but we abandon the people and ideals we claim to care so much about.’

Even when we are not doing mutual aid in the material world, shopping for and delivering food to the more vulnerable members of our communities, for example, we can be engaged in caring: getting together to do a quiz on Microsoft Teams, having ‘a night in at the pub’ to chat on Google Meet, singing our hearts out together on Zoom while muted because our voices would be horribly out of sync....

When we engage in these sorts of activities, we will likely exchange information, about COVID-19 and/or our communities, and we will be caring for each other’s physical and mental health, whether explicitly or implicitly.

In many instances, we will be doing politics together, discussing the vagaries of policy-making around COVID-19 and perhaps moving on to other issues of mutual concern as the world turns: Brexit, Black Lives Matter, economic recession....

In the virtual world as in the material one, as Kleist and Chrisdale highlighted, we will probably not be in an affinity group with our political peers: we may well have to enter discussions about bogus science, ‘fake news’, and even countenance ostensibly bizarre conspiracy theories.

Holed-up in a kolonihavet, a one-room shack on a Danish allotment, since Denmark closed its borders in mid-March, I have been a fascinated observer of the science and politics of the coronavirus globally. The science issues I followed most closely were: the R number, hydroxychloroquine, vaccination, and masks – I concentrated on the public wearing of masks in relation to the COVID-19 pandemic.

Seeking out the best science, I entered debates on social media so that people – family, friends, allies and contacts – might not use masks poorly nor advise others to do so, and thus actually increase the risk of transmission. Moreover, I wanted to warn people about taking false comfort from wearing a mask and so become less fastidious about hand hygiene.

“We are going to need to find ways to be patient and to talk through some pretty major differences.”

What was happening as citizens interacted to debate the science and politics of COVID-19? Well, I suggest that we were doing politics ourselves, specifically politics as conceived by the theorist Hannah Arendt. As governments in the UK and US were palpably failing their citizens over the COVID-19 pandemic, large numbers of people came together and interacted in the cause of ensuring human lives and freedoms, although that may not have been their explicit intent.

Arendt calls this coming together to debate a ‘public space of appearance’ that must be constantly recreated via ‘action’, citizens disclosing themselves to each other through word and deed.

Some of the virtual spaces revealed during the pandemic were new, at least to many ‘users’, notably social media conferencing platforms such as Zoom. Others, such as Facebook and WhatsApp groups, were revitalised by people having more time to spend in/on them.

In many instances, it seemed that people invested those spaces with views that had been more rigorously thought through. Online activism cannot be politically isolated from activism in the ‘real world’. The internet is a space of the real world, and acts of citizenship performed online are doing politics.

That said, opinion varies on the relationship between online activism and material action. Many activist groups have, nevertheless, responded to government lockdowns or social isolation policies by turning to the internet.

Overall, my exchanges on social media in Corona times support Bruno Latour’s observation that, due to COVID-19: ‘The public are learning a great deal about the difficulty of statistics, about experiment, about epidemiology.’

What’s more, even as we – unsurprisingly – struggled to communicate complex statistics and the shifting science, I and the people with whom I was interacting were evidently learning more about politics too.

In my case, I was engaging with views on and around the COVID-19 science that I would previously have found it inconceivable or unacceptable to countenance, including what I would have dubbed extreme libertarianism, specifically in the US.

Perhaps I could never agree with US libertarians about the reach of the ‘free market’ in society, but I could engage with their scientific scepticism, critiques of government, and concerns about personal freedoms: I could respect their views.

Let me give one example of how my sceptical reawakening made an impossible politics possible.

Responding to a posting in a WhatsApp group, I pursued accusations of (left-wing) media bias or ‘fake news’, a topic I’d previously judged to be – well – fake news: a stock right-wing rebuttal of good investigative journalism. The posting I was interested in was a YouTube response to BBC coverage of Donald Trump’s infamous ‘sunlight and bleach’ press conference on COVID-19, which was delivered on 23 April 2020.

Watching the 11-minute video, I couldn’t help but be impressed by the effort that had gone into the presenter’s research. The BBC had, he argued, edited out the context in which the US president’s comments were made, which was a presentation made by Bill Bryan, the head of the science and technology directorate at the US department of homeland security. Allegedly, Bryan’s presentation was not referred to in the BBC report.

While the YouTube presenter may be guilty of the same sin he accuses the BBC of, editing video footage to make a predisposed political point, his claims were worthy of debate. And indeed that is exactly what I did with the person who posted the video in our WhatsApp group.

Scepticism when viewing mainstream media reports, we were able to agree across a considerable ideological chasm, was valid from both our points of view.

Another encounter on ‘uncommon ground’.

More inclusive masks: People with hearing loss are finding life harder because of face masks (which have become compulsory in lots of places). There are 12 million deaf or hard of hearing people in the UK. How to make the mask: www.tinyurl.com/peacenews3

A longer version of this article is on the PN blog.

Kelvin Mason is co-author of Singing for Our Lives: Stories from the Street Choirs (HammerOn Press, 2018) and a PN Wales Page co-editor.