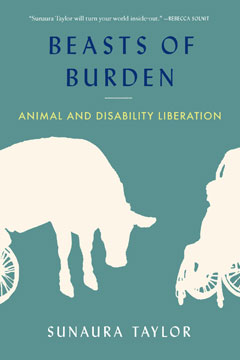 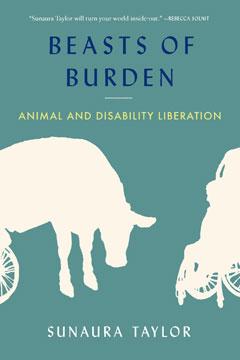 The field of disability studies has never gained much traction in the popular sphere. Of course, this would not come as a surprise to someone like Sunaura Taylor who knows all too well that societies are primarily built by and for able-bodied people, and that disabled people are some of the most neglected and marginalised people in the world.

In this semi-autobiographical work, Taylor outlines with great patience what a disabled person is, and can be, in a similar way to Lynne Segal’s 2013 book, Out of Time, which tries to reframe the personhood of older people.

However, Taylor is not interested in giving people total primacy, ‘to be human for human’s sake’, but rather to raise an issue that she finds central to disability studies, namely animal ethics. This is the book’s most novel aspect: its reading of animals using the framework of disability theory.

Drawing on this framework, as well as personal anecdotes and a rich variety of examples that add nuance to the narration, she shows us that while some animals are born with disabilities, for others it is the environment in which they are forced to live – such as that endured by factory-farmed animals – that makes them disabled.

And this enables the reader to rethink the gap between human and nonhuman animals – a gap that has too often encouraged us to see differences rather than similarities.

In this light, it brings to mind Donna Haraway’s When Species Meet which shares an emphasis on conceptual thinking and exploring the possibility of friendship between species. But Taylor’s book is not as dense a read as Haraway’s.

Beasts of Burden is charged with a felt urgency for all vegans to organise around the issues of slaughter, domestication and experimentation on animals.

According to Taylor, there has been only one animal activist group that has framed their work around both disability and animals, and that was Disabled and Incurably Ill for Alternatives to Animal Research (DIIAAR). The group is no longer active, but should be most admired for its commitment to combating animal research and experimentation even when this research was directly beneficial to themselves as disabled people.

DIIAAR reminds us that we too often dominate those that are deemed dependent and vulnerable in order to enable others to prosper and thrive. But with the millenia-long domestication of animals, how do we do away with this?

According to Taylor, ‘To do right by these animals now means respecting their dependence, their interdependence, and indeed their naturalness as beings who have just as much of a right to live out their lives on this planet as we do.’