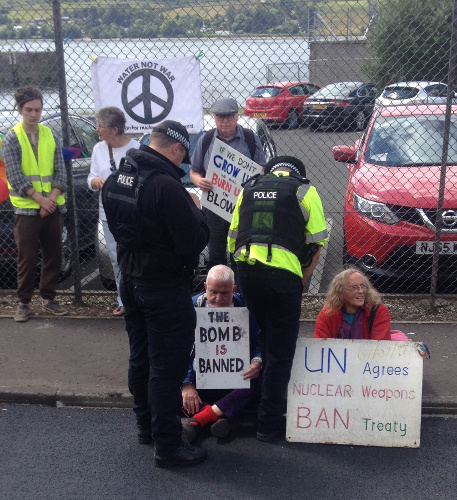 A Faslane peace camper was in prison as PN went to press, following a day of action at the Faslane nuclear submarine base in Scotland.

Faslane, 20 miles west of Glasgow, is the home of the UK's Trident nuclear missile submarine fleet.

On 7 July, a total of five peace activists were arrested after 'reclaiming' the base on the second anniversary of the UN adopting the Treaty on the Prohibition of Nuclear Weapons (TPNW).

One group, Janet Fenton, Gillean Lawrence and Eoin McCarthy, was arrested and charged with vandalism.

Meanwhile, Brian Quail and Willemien Hoogendoorn held up base traffic by blocking the south gate, but were not arrested.

Later in the day, Willemien was arrested at the south gate, locked-on to Elaine Graham. The two Faslane Peace Campers were held overnight.

When they appeared in court on 8 July, Willemien refused to accept bail conditions which stipulated she should not enter access ways to Faslane's gates.

She was held on remand until 25 July, her intermediate court appearance. Trial was set for
1 August.

Janet Fenton, vice-chair of Scottish CND, who participated in the TPNW negotiations at the UN, said: 'This is a real treaty that represents the global view of nuclear weapons in the light of the very real danger of burning up our planet and destroying all life. At a time when Scotland is in tune with a mature transnational view, it was necessary to rename the base at Faslane for the redundant anachronism that it is.'