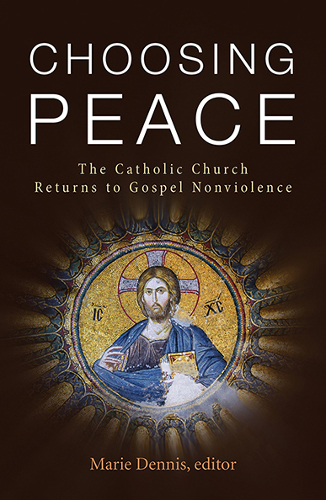 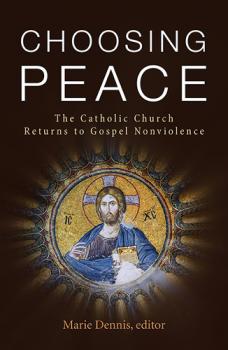 This collection, expertly edited by Marie Dennis, guides us through the complex discussions that took place at the 2016 Rome conference ‘Nonviolence and Just Peace’ organised by a host of Catholic organisations including Pax Christi International. Its delegates wrote a statement, appealing to the Catholic Church to ‘re-commit to the centrality of gospel nonviolence’.

Most inspiring are the testimonies of those working on the ground in conflict zones. We learn of their efforts to live nonviolently in dangerous situations, and their painstaking work in bringing the most battle-hardened groups to the negotiating table in Sudan, Uganda, Colombia and Afghanistan.

In the two chapters on scriptural evidence and traditional Catholic thought we read of the nonviolence in Jesus’ life and teachings, later taken up by his disciples. Gandhi, we are reminded, read the Sermon on the Mount every day for forty years. Jesus’ words at the time of his arrest, ‘put down the sword’, are interpreted by some Christians as an instruction to avoid armed conflict at all costs.

Another chapter (‘Active Nonviolence’) outlines the results of Maria Stephan and Erica Chenoweth’s by-now-famous study of 323 major violent and nonviolent campaigns around the world between 1900 and 2006. They found that the nonviolent campaigns succeeded twice as often, and resulted in more democratic and peaceful societies, than the violent ones, mainly because they enabled much wider participation.

Most relevant for peace activists in the west, are the contributions that discuss strategies of mass civil disobedience. French philosopher Jean Marie Muller reminds us that the purpose of direct action is to create a crisis in which society is forced to confront an issue: ‘Conflict is necessary  for creating peace.’

Not all of delegates wished to outlaw the use of armed force and there are some unusual contributions in favour of just war theory, which maintains that wars that meet certain conditions can be justified.

The conference began by hearing from those who were living amidst armed violence and conflict. Their oft-repeated message, ‘we are tired of war’ - and their plea to the west to stop fueling war through the arms and drugs trades - makes the delegates’ appeal to the Church an urgent one.