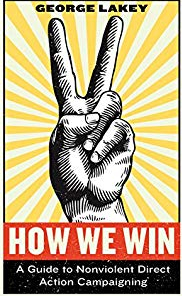 A review-editorial of three important new books on campaigning 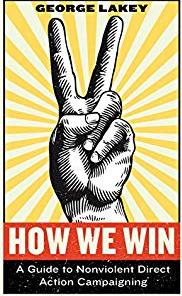 All three of these books contain inspiring stories of effective, successful campaigning. All three present challenging ideas that deserve chewing over. And all three have concrete suggestions, born out of experience, that could be useful for most campaign groups.

If you were going to buy only one of them, I would recommend George Lakey’s How We Win (out in December). Whether you are in a union, an NGO, a community group, a single-issue campaign, or a direct action affinity group, there's a lot in How to Win that could benefit your work.

Yes, it is specifically addressed to people doing nonviolent direct action, but How We Win tells more campaigning stories than the other two books put together; it gives guidance on how to build teams/groups while doing anti-oppression work, and it has a lot on creating solid campaigning plans. It’s about much more than how to run a state-of-the-art direct action campaign.

How We Win also has the biggest picture out of the three books. George Lakey has bad news and good news about the times we're in. As income and wealth inequalities widen, we can't avoid political polarisation alongside our economic polarisation. ‘It’s not something we can fix through urging more civil discourse.’ Here in Britain, we've decided to add in more political polarisation with Brexit.

Polarisation means greater strength for the ultra-right, which is frightening.

“You only get the justice that you have the power to make happen.”

The good news, according to Lakey, is that polarisation is also an opportunity. He contrasts the fortunes of four European countries which had fascists marching in the streets in the 1920s and 1930s: ‘In Germany and Italy, Hitler and Mussolini came to power. In Sweden and Norway, democratic socialist movements pushed economic elites off their pedestals and invented the egalitarian Nordic economic model.’

So we're in for a ‘big political fight’, but if we win, we can win big.

Lakey urges movements to be on the offensive. The temptation when under attack is to be defensive, to try ‘to hang on to previously-achieved gains’, as Lakey puts it. Instead, we should set ‘new goals for life enhancement’ and then ‘fight vigorously’ for them.

Lakey contrasts the fortunes of the US movements which went defensive in the 1980s, under attack from reactionary president Ronald Reagan, with the one movement that went on the offensive, the movement for lesbian, gay, bisexual and transsexual (LGBT) rights.

Staying on the offensive in the US right now would mean, for example, not trying to defend Obamacare (which brought millions of previously-uninsured people into the healthcare system, but left 26 million outside). Instead, it would mean campaigning for a universal coverage as we have in Britain's national health service.

Here in the UK, it would mean not trying to defend the NHS as it was before marketisation, but something better.

So, stay positive in the face of the challenges, learn from activist history, and fight for ambitious goals 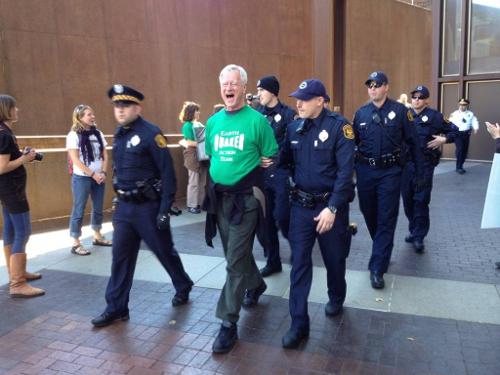 George Lakey is arrested in front of a PNC bank branch in Pittsburgh at an EQAT climate justice action on 21 October 2013. There were actions at 15 PNC bank branches that day, and six other EQAT members were also arrested. Photo: EQAT

Each of these three books has a core positive story running through it. Lakey’s How We Win relates a huge number of campaigning success stories, from different countries and decades. If there is one experience at the heart of the book, it’s that of Earth Quaker Action Team (EQAT, pronounced ‘equate’), a group Lakey co-founded in 2009.

EQAT ran a five-year nonviolent direct action (NVDA) campaign which forced PNC, one of the biggest banks in the US, to stop financing mountaintop-removal coal-mining. How We Win describes EQAT’s startlingly different NVDA trainings, its inclusive, conflict-friendly approach to setting goals (strategy), and its anti-burnout ‘core team’ method of volunteer organising.

“We should set new goals for life enhancement and fight vigorously for them.”

The key experience of Matthew Bolton’s How to Resist is that of the Living Wage campaign run by the group he heads, Citizens UK. Since 2001, the campaign has won over £210 million in extra wages for some of the lowest-paid workers in Britain, lifting over 150,000 people out of poverty.

Bolton tells us about his first fumbling efforts at community organising, which won a Living Wage for 150 cleaners at a university; how Whitehall cleaners dropped letters directly onto the desks of cabinet ministers as part of winning themselves a Living Wage; and how Citizens UK boxed in Conservative politician Boris Johnson so that he was forced to publicly commit himself to the Living Wage before becoming mayor of London.

The background to the final book, Jonathan Matthew Smucker’s Hegemony How-To, is Occupy Wall Street, which Smucker joined after it had been going for several months. Unlike EQAT’s PNC campaign or the Living Wage campaign, there is no concrete result you can point to with Occupy, but many people see it as having had a huge positive impact.

Matthew Bolton of Citizens UK doesn’t see it that way. He thinks: ‘we must judge the campaign harshly’. Occupy had the right motives (increase economic equality) and the right moment (after the 2008 financial crash), ‘but without method and strategy you don't get very far when you're up against the excesses of global capitalism’. 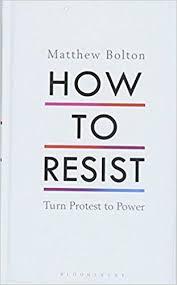 What did Occupy win?

One key point for Bolton is that Occupy did not make specific, winnable demands. You can have a vision, like ‘Make Poverty History’, Bolton writes, but you need specific proposals within that vision. Make Poverty History had a target for governments to commit to spending 0.7 percent of gross national income on international aid, Bolton points out approvingly.

Bolton compares the demands that Occupy made following the financial crash with those made by his own organisation, Citizens UK. Occupy London had nine demands that were all like this: ‘We want structural change towards authentic global equality.’ London Citizens had three post-crash demands in 2009, including the demand that businesses paid the Living Wage ‘to all employees including those working for on-site subcontractors’.

Bolton write: ‘despite huge media attention, there was no discernible impact from the Occupy London protests on tax, equality or sustainability’, three of the core concerns of Occupy London. In contrast, London Citizens had big wins on the Living Wage and on controlling the interest rates charged by exploitative payday lenders, another of its demands.

George Lakey doesn't say much in How We Win about Occupy, but he makes the same point as Bolton about needing specific, achievable demands – and a ‘target’, a decision-maker you focus on – in each campaign you're running:

‘One reason why observers wonder if the Black Lives Matter activists have staying power is because it is unclear how many of the local protests against killings by police are transforming into genuine campaigns, with winnable demands, targets that can yield those demands, and a strategy for growth and escalation.’

Finding an achievable ‘demand’ and a ‘target’ who can deliver it (who you have a realistic prospect of influencing) can be challenging on issues like nuclear disarmament.

It's hard to break the big vision down into smaller pieces that are achievable and worthwhile, and steps towards the bigger goal.

The Piedmont Peace Project in North Carolina in the US worked with local community groups that needed funding for their work.

“Whitehall cleaners dropped letters directly onto the desks of cabinet ministers as part of winning themselves a Living Wage.”

The Peace Project prepped each group to ask local politicians to vote against the MX nuclear missile programme, and to use the money to meet their needs; the needs of disabled people, or elders, or....

Going back to Bolton's criticisms, both Black Lives Matter and Occupy did change the national and international conversation about important topics. 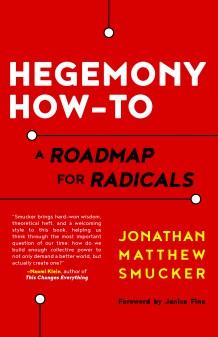 Smucker writes of the impact of Occupy on discussions of the economy: ‘It was as if a 30-year spell had suddenly been lifted, as a new “common sense” was unveiled about what is at stake and who is to blame.’

He points out that ‘We are the 99%!’ was a way of framing class struggle that didn’t put a lot of people in the middle on the defensive.

Bolton doesn't acknowledge that altering the national conversation is a major and necessary achievement (which it is). He might say that the point is not to change the culture, it's to change lives – the lives of people who’re at the sharp end.

Smucker has a different view. He uses words like ‘hegemonic contestation’ and quotes ‘Habermas’ and ‘Gramsci’, but his basic argument is simple.

On the other hand, Smucker is just as frustrated as Bolton that so many radicals fight shy of getting involved in institutional change. All three authors argue that radicals need to become comfortable with gaining and using collective power.

Ever heard of the ‘shit-in’? I hadn’t before reading Bolton’s How to Resist.

In 1964, the mayor of Chicago, Richard J Daley, was dragging his feet on commitments he’d made to some poor neighbourhoods in the city.

Community organiser Saul Alinsky, and the group he was working with, the Woodlawn Organisation, realised that while the mayor didn’t care about their neighbourhood, he did care a lot about Chicago’s O’Hare airport, the busiest airport in the world, which had recently opened two shiny new terminals.

The Woodlawn Organisation surveyed the airport and worked out that it would take 2,500 people to occupy every public toilet cubicle and every urinal in O’Hare, a number that the group could realistically mobilise.

If all 2,500 occupiers took a book and some lunch, they could hold the toilets hostage all day, with ‘catastrophic’ consequences, as Alinsky put it.

Within 48 hours of the planning being leaked, the Woodlawn Organisation had been invited to city hall. Bolton writes: ‘Fortunately for the airport passengers, the protest was never actually carried out because the threat of it alone was enough to get the Mayor back on side.’

One of the lessons here is that if you need something from a decision-maker, it’s useful to find something that is important to them and that you and your allies can affect.

Another is that threats only work if they’re credible. In this case, Daley knew from past experience that the Woodlawn Organisation could mobilise 2,500 people to carry out an action, and that its members were angry enough and bold enough to carry out such an outrageous action. They had already shown their collective power.

Matthew Bolton writes that the first principle of making change is that ‘you only get the justice that you have the power to make happen’, the justice that you have ‘the power to compel’. The point of campaigning is to make a difference. It's not to live in an activist bubble where we can comfort ourselves that we have the right ideas and everyone else has the wrong ideas. Each of these books, in its own way, can help us break out of whatever bubbles we're in – and win.

Next issue, we have an essay by George Lakey on the difference between one-off protests and campaigns that build power.