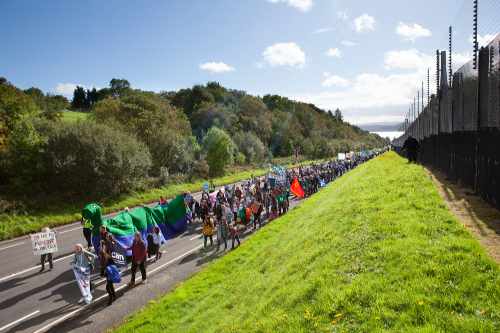 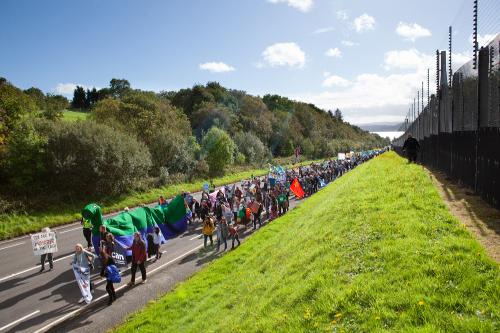 For a few hours on 22 September, the gate to Faslane, the Clyde estuary home of the UK’s Trident submarines, became a ‘hostile environment’ for nuclear weapons.

In putting together the ‘Nae Nukes, Anywhere’ event, Scottish CND planned something more than a demo or a protest. The vision was for a celebration of transnational solidarity around the rejection of nuclear weapons, and in particular the hope and pathway provided by the new UN Treaty on the Prohibition of Nuclear Weapons (TPNW).

The plan came off, in the main thanks to a very special group of TPNW advocates from far and wide who gave a simple message: ‘We salute your resistance and we are with you’.

The nuclear-armed states were well represented by Ekaterina Mikhaylenko from Russia, Sharon Dolev from Israel, and Tim Wallis, Vicki Elson and Anthony Donovan from the US.

The same message came from US ‘umbrella’ states via Reiner Braun from Germany, Maike Beenes from the Netherlands, and Shigeo Kobayashi from Japan. Scottish CND’s own Flavia Tudoreanu gave her perspective as a Romanian. Canadian Allison Pytlak was there to represent the Women’s International League for Peace and Freedom, which was a major player in the civil society movement that helped gain the TPNW.

Loudest cheer of the day from the folk who had gathered in the sunshine from all over the UK and beyond was when Tim mentioned the decision of the Californian senate to back the TPNW.

The nerve that story touched is the growing understanding that taking on the nukes is about more than dealing with the particular manifestation on your own patch, be it Trident or Dimona. It is a matter of touching the determination of people everywhere.

A warm and Scottish welcome to the visitors came from poet and novelist Jackie Kay. Although she is the non-political Scottish makar (national poet), she said she was determined to be at the rally. She was supported by Kathy Galloway, former leader of the Iona Community, and by songsters Adam Holmes, Pauline Bradley, Penny Stone, Eileen Penman, Willie Sinclair, Sylvia McGowan, and Protest in Harmony. There was also a zany Abba tribute from the Gareloch Horticulturalists.

There is so much more we can all do to comply with the TPNW at personal, local and national level. In Scotland’s case, there is the risk that we will be satisfied with simply being against nuclear weapons and fail to explore all the routes that lie open.