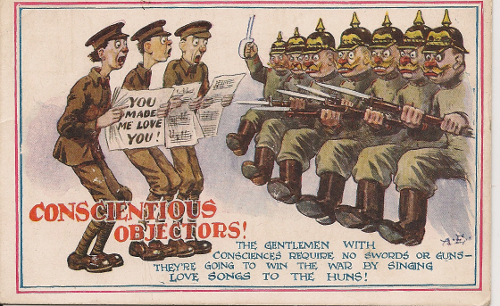 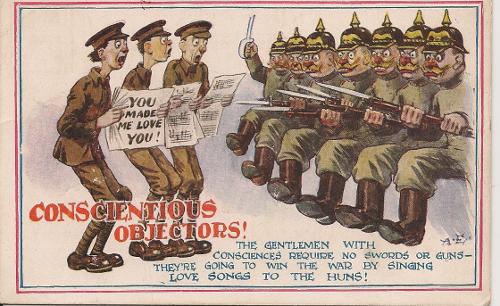 The text below is from Conscientious Objection Remembered, a booklet produced by Haringey First World War Peace Forum. The booklet tells the story of the 350 men in Haringey, a borough in North London, who refused to fight in the First World War. The booklet also contains background information about Haringey 100 years ago and a two-mile walk through Haringey (which goes past houses where some COs lived).

When Britain declared war on Germany on 4 August 1914, many people believed that war was noble, heroic and exciting. But enthusiasm was not universal. Thousands protested against the war. Some of the loudest and most active protesters were from Haringey, which had a history of protest, strikes and dissent.

Political groups in Haringey included the North London Herald League, a movement of readers and supporters of the Daily Herald newspaper which, under the socialist politician George Lansbury, was against the war. Quaker meeting houses, Bradley Hall on Station Road in Wood Green, and Tottenham Meeting House, became hubs of anti-war activity.

The Brotherhood Church in Southgate Road, nearby in Islington, was hugely influential in the anti-war movement of North London, giving support and shelter to COs. Other religious groups, Plymouth Brethren, Christadelphians and Jehovah’s Witnesses, were also opposed to taking part in the war.

Conscription was passed into law in March 1916, though action in Parliament from anti- conscription MPs – including Tottenham’s Percy Alden – forced the government to concede a ‘Conscience Clause’. This permitted a man who disagreed with killing in war to be exempt from conscription on the grounds of conscientious objection to taking part in military combat.

There were three main reasons for being a CO:

Seven COs, one road

In Connaught Road, there were seven men at three addresses, the greatest number of COs on any street in Haringey.

16 Connaught Road was home to Isaac Goss, son of Jewish refugees from the Russian Pale of Settlement, 36 years of age, married with four children and owner of a tailoring business. The Hornsey military service tribunal refused him an absolute exemption in 1916, giving him exemption from combatant service to do work of national importance. He refused to accept this conditional exemption but the Middlesex appeal tribunal only confirmed Hornsey’s decision and he was duly arrested for absenteeism and taken to Mill Hill Barracks.

Isaac Goss must have convinced the military authorities that his work was of national importance as he seems to have avoided enlistment in the Non-Combatant Corps in support of front-line soldiers. He appears to have returned to civilian life. Perhaps being the secretary of the London County Council school care committee and running a Sunday school, a Boys’ Club and summer camps was enough to make the authorities wary of his influence. He was also a leading member of the No-Conscription Fellowship and a ‘thorn in the side’ of the Hornsey tribunal.

The five Walker brothers, clerks and commercial artists, all single, aged between 33 and 21, lived at 17 Connaught Road, the largest family group of COs in Haringey. All five young men refused to answer any call-up papers, respond to any military orders or undress for medicals when they were taken to Mill Hill Barracks for enlistment into the Non-Combatant Corps. All five were at one time or another arrested, court-martialled, or given prison sentences with hard labour.

Joseph Goss, younger brother of Isaac, lived at 31 Connaught Road. At 25, he was unmarried, a tailor’s cutter and manager. The Hornsey tribunal refused him absolute exemption on 23 March 1916, offering exemption from combatant service, which he refused. He was arrested for absenteeism in October and taken to Mill Hill. Joseph refused military orders and was given six months’ hard labour to be served in Wormwood Scrubs civilian prison. 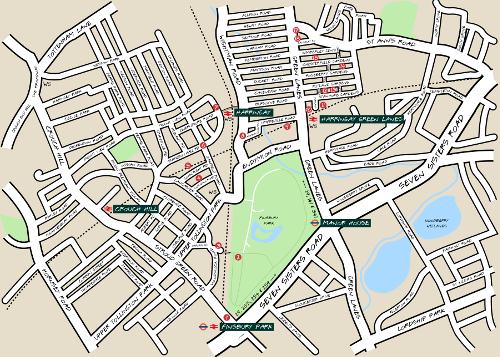 The postcard is reproduced courtesy of Cyril Pearce; the portraits are reproduced courtesy of Philippa Goss. The map is by Leon Boothman:
www.boothmandesign.com. There will be a guided peace walk along the route on Sunday 14 October (1.45pm–3.30pm). The walk will take one-and-a-half hours, over two miles, and is suitable for all ages. There are limited places: to book your spot on the walk, email: hfwwpf [at] yahoo.com. You can download the entire Conscientious Objection Remembered booklet from the Haringey First World War Peace Forum website. All 350 of Haringey’s COs are listed on the site with their addresses, occupations, and what is known of their lives before, during and after the war: www.hfwwpf.wordpress.com