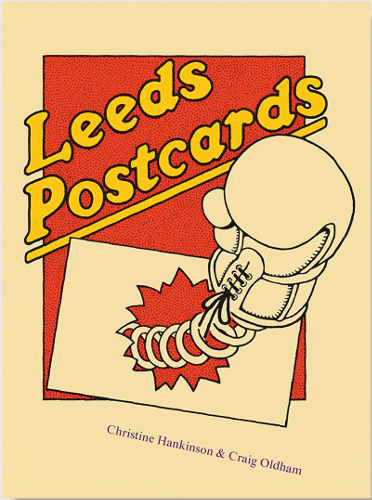 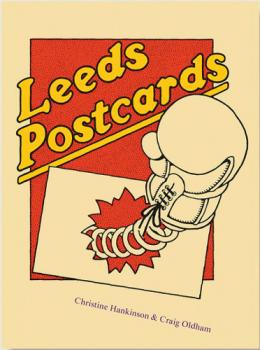 In 1979, the trade unionist and communist Richard Scott founded Leeds Postcards, which he named after the city where he lived and worked. The first postcard, beautifully illustrated by Peter Smith, was sponsored by the occupational health and safety magazine, Hazards Bulletin and warned of the dangers posed by ‘visual display units’ – the name given to computer screens when they began to be used in the workplace. Forty years later, despite computers taking over our lives and social media diminishing the use of the post service, Leeds Postcards continues to make and sell punchy political postcards.
Christine Hankinson joined Leeds Postcards in 1984 and remains the driving force behind the operation. The cards selected for this book were chosen by her and the graphic designer Craig Oldham. In the introduction, Oldham writes: ‘[by never imposing a “house-style”] Leeds Postcards defied tradition… if it was explicitly political and didn’t look like anything else out there, it was probably Leeds Postcards.’ They were never ‘punk’, but the graphic look was always rough round the edges. It was the message that was important, and that was always delivered with blunt Yorkshire humour.

For anyone who has lived through the last four decades, this book will be the equivalent of Proust’s famous madeleine [the small cake that triggers a flood of memories for the narrator of the novel Remembrance of Things Past – review ed], taking you straight back to the Miners’ Strike, and the bleak struggles against Margaret Thatcher, sexism, racism and nuclear fear.

It was grim back then, and Leeds Postcards were an essential glimmer of warmth to sustain campaigners through their darkest moments – jewel-like missives which put a smile on the faces of postal workers as they helped the postcards on their journeys across the country.

Steve Bell, Jacky Fleming, Peter Kennard and Angela Martin are four big names that stood out for me as I leafed through these pages. Leeds Postcards are particularly good at publishing cards by women, and it was a joy to see so many of Jacky Fleming’s cartoons again. Other favourites for me were Christine Hankinson’s 1991 ‘I’ll be a post-feminist in post-patriarchy’ and ‘New Labour, I Can’t Believe It’s Not Better’ (1999, Christine Hankinson again, visualised by Adam Waller).

While it’s the perfect gift for any older campaigner – and let’s face it, there aren’t many gift opportunities for anti-consumers – this book is also more than that. It’s great for contextualising political life over the last 40 years. And, like the Poster Workshop book from Four Corners (reviewed in PN2620), this is a resource book and inspiration for a new wave of campaigning.

Indeed, I’ve been inspired by Richard Scott’s 1988 card, ‘I don’t give a shit what your house is worth’, to make a T-shirt with a similar message. Plus ça change….