Ann Pettifor, The Production of Money: How to Break the Power of Bankers 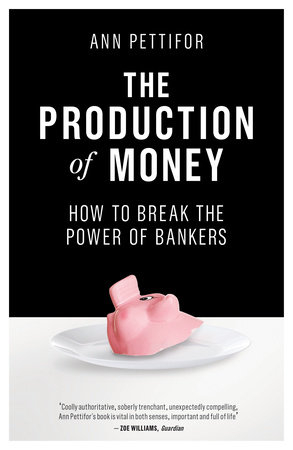 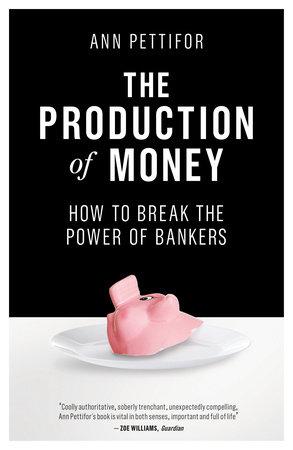 In John Carpenter’s celebrated 1988 sci-fi film They Live, a drifter living in a shanty town discovers a special pair of sunglasses which reveal a terrible secret that explains the huge disparities in wealth and power that surround him.

Wearing them, the hero is able to see reality as it truly is: his world is being run by aliens working alongside a wealthy human elite (‘the 1%’). Moreover, the aliens are manipulating ordinary people’s thoughts and perceptions to conceal this fact.

Consider the following. According to a 2010 survey, 33 percent of people in Britain believe that banks are, in effect, well-protected piggy banks, and that they don’t make use of the cash that customers pay into their accounts. A further 61 percent believe that banks simply act as go-betweens, taking money in from savers and lending it out to borrowers.

In other words, at least 94% of the population have little or no idea how commercial banks really operate or where the overwhelming majority of money in our economy actually comes from.

And it’s not just the general public. According to Pettifor, ‘the overwhelming majority of mainstream economists do not understand, nor do economists study, the nature of credit and money, or indeed the wider financial and monetary system’. (In her recent book Doughnut Economics, Kate Raworth notes that, prior to the 2008 financial crash, ‘many major financial institutions – from the Bank of England and the European Central Bank to the US Federal Reserve – were using macroeconomic models in which private banks played no role at all’!)

The Bank of England itself explained the reality in 2014 in an article, ‘Money creation in the modern economy’, in its Quarterly Bulletin: ‘Rather than banks receiving deposits when households save and then lending them out, bank lending [itself] creates deposits’. This, they noted, is why ‘some economists have referred to bank deposits as “fountain pen money”, created at the stroke of bankers’ pens when they approve loans.’

Moreover, roughly 97 percent of the money in the UK economy is created this way by commercial banks.

Crucially, money is not a limited commodity, like figs or iron ore, because it can be created (and destroyed) at the stroke of a pen or the tap of a computer key.

The consequences are profound.

Indeed, Pettifor claims that as a result: ‘For those who live in societies with sound, developed monetary systems, there need never be insufficient money to tackle, for example, energy insecurity and climate change. There need never be a shortage of money to solve the great scourges of humanity: poverty, disease and inequality; to ensure humanity’s prosperity and wellbeing; to finance the arts and wider culture; and to ensure the “liveability” of the ecosystem.’

The crucial questions she notes are: (1) who controls the creation of money; and (2) for what purposes is it created?

Ruling economic theory views markets as ‘the unrivalled way to organise economies’. According to Pettifor, this has led to governments granting two great powers to private bankers: ‘the ability to create, price and manage credit without effective supervision or regulation’; and ‘the ability to “manage” global financial flows across borders – and to do so out of sight of the regulatory authorities’.

In the process, governments have ‘handed effective control over the economy – over employment, welfare and incomes – to remote and unaccountable financial markets.’

The results have been a string of financial crises, our current ‘austerity’ regime, and the hollowing-out of many of the world’s democratic states. This has contributed to the rise of right-wing populist movements that look to ‘strong’ leaders ‘to defend whole societies from the utopian but destructive predations of market fundamentalism’.

Moreover, Pettifor writes: ‘If, as now, credit creation is not managed by and regulated on behalf of wider society, then the finance sector’s control over society will remain a divisive, destructive and despotic power’ and ‘the recurring financial crises of the last four decades will roll on relentlessly and lead inevitably to graver social and political upheavals and even war.’

Here Pettifor looks to her hero, the economist John Maynard Keynes, the power of whose ideas, she claims, ‘has no precedent’.

It gets quite technical. Pettifor argues for tighter state controls on bank lending and the creation of credit; taxing the movement of money across borders; and public spending funded by loans ‘arranged by the government’s debt management office in concert with the central bank and fixed at low rates supported by central bank action’ (I said it was technical). Such measures, Pettifor believes, would allow us to transform our domestic financial system so that ‘there need never be a shortage of money for society’s most urgent projects.’

These policies, she claims, ‘led to proven economic success during the period of 1945–1971’, and could do so again.

A fair chunk of her book is also devoted to what Pettifor thinks should not be done. Her main targets are campaigns like Positive Money, which seek to entirely strip banks of the power to create money – an idea she rejects for a host of reasons. Among other things, she believes this would ‘empower and enrich those fortunate enough to have accumulated savings.’

Indeed, Pettifor views the creation of money by a well-developed monetary and banking system as ‘a great civilisational advance’. It means that ‘bold adventurers’ no longer need to rely on rich and powerful ‘robber barons’ for finance. Moreover, ‘the miracle of a developed monetary economy’, she notes, is that ‘savings are not necessary to fund purchases or investment’ (emphasis in the original).

This is not an anti-capitalist book. Nor, despite her claims, did I come away convinced that Pettifor’s Keynesian approach is truly compatible, in the longrun, with living within environmental boundaries. Even so, this book was still, for me, in several important ways, a revelatory work, uncovering some of the sinews of our existing economic and monetary systems.

It was also highly frustrating, partly because it is quite repetitive and lacks a much-needed index, but mainly because when I had finished reading it I felt that I had understood less than half of its contents.

There are other books available that can help (I found myself leaning on the New Economics Foundation’s 2011 book, Where does the money come from? A guide to the UK’s monetary and banking system). It’s just that you expect more clarity from an author who believes that ‘greater public understanding of… the monetary system as a whole’ is ‘fundamental to any attempt to wrest power back from financial markets’.

In the book’s closing chapter, Pettifor names women and environmentalists as ‘two overlapping groups… whose engagement in [issues concerning the monetary system] is vital’. Peace activists should surely be added this list.