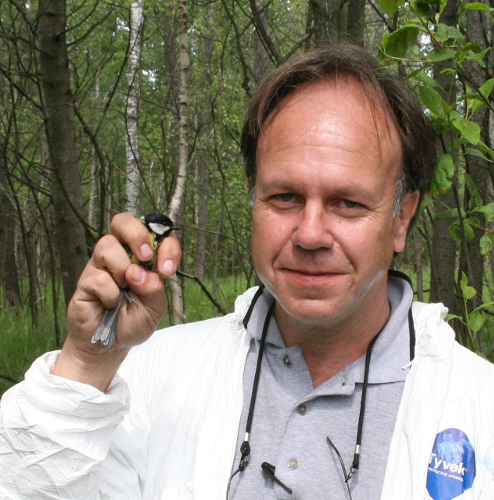 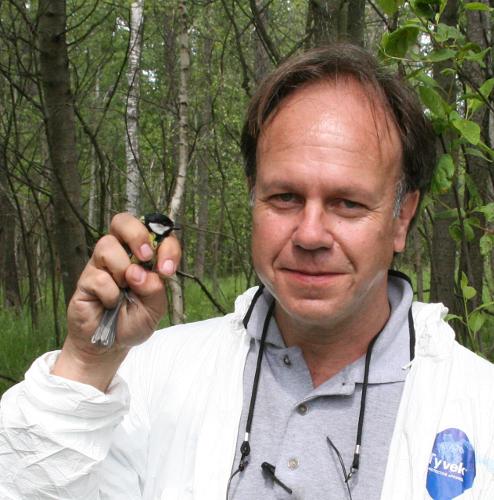 Dr Timothy Mousseau of the University of South Carolina holding a great tit in Chernobyl’s Red Forest. Mousseau has been studying the zone around Chernobyl since 1999, finding that birds have smaller brains, trees grow more slowly, and decomposers (microbes, fungi and insects that break down dead organic matter) are barely working. Photo: Timothy Mousseau

The University of Stirling hosted two events on low level radiation and health in June 2018. The first was an International Union of Radioecologists (IUR) workshop seeking answers to a range of questions about the impacts on ecosystems. Some illustrious international scientists who attended the IUR workshop kindly stayed on to present at the second event, the 23rd conference on Low Level Radiation and Health (LLR+H). Started by members of the public in 1985, LLR+H is run on a voluntary basis and aims to keep abreast of the latest research on the topic.

Dr David Copplestone, based at Stirling university, is a member of the international commission on radiological protection (ICRP) Working Group 4. He has been much involved with impacts on wildlife and joined us at LLR+H to chair the meeting.

The programme included: professor Carmel Mothersill from Canada talking about non-targeted effects; professor Tim Mousseau from the University of South Carolina who has undertaken much work in Chernobyl (as well as Fukushima) evaluating the impacts on wildlife; and Stanislav Geras’kin from the Russian Institute of Radiology and Agroecology, Obninsk, examining effects on the Scots Pine, Pinus sylvestris.

Professor Mariana Alves-Pereira focused on non-ionising radiation and acoustic damage experienced by the Portuguese armed forces and Mary Olson from the US Nuclear Information and Resource Service addressed gender issues.

The opening lecture was given by professor Mothersill who, with her husband, Colin Seymour, has worked on those elusive non-targeted effects. Their work has focused on the ‘bystander effect’ that happens when one cell is irradiated and its neighbour, not receiving any direct radiation, still experiences an impact.

Non-targeted effects (NTEs) separate radiation ‘deposition’ in a target (for example, in DNA) from the effect. NTEs mean small doses can lead to big effects. NTEs open the way for diffuse and unpredictable effects at the level of the organ, organism, population and ecosystem which are not linked simply to the dose delivered to a particular ‘target’.

NTEs could explain the conditions seen in atom bomb veterans, Gulf War veterans or ME sufferers. There is much work to be done on both the theoretical understanding of the mechanisms involved and the associated practical responses which could aid treatment.

Mary Olson’s work has focused on gender differences which came to the fore with the publication in 2006 of Phase 2 of the seventh report of the US National Academy of Sciences: Biological Effects of Ionizing Radiation (BEIR VII). Mary rang her mentor, the late Dr Rosalie Bertell who said: ‘Do the maths’.

Mary, although feeling somewhat daunted, did the maths and established that females are more sensitive to radiation effects. For every two men who get radiation-induced cancer, three women do.

So how does this fit in with the reliance of the standards on ‘Reference Man’ – a male of a certain height, weight and age? Clearly, such assumptions are no longer valid.

Mary has set up a gender project, sought funds and is set on making grants available to those doing relevant research.

Mousseau and Geras’kin have spent years since the 1986 Chernobyl accident studying its impacts on the local wildlife. The nearest forest became known as the Red Forest. Prof Geras’kin has focused his work on the Scots Pine and has established:

1) Strong effects at the molecular level;

2) Moderate effects at the physiological level; and,

3) Slight effects at the organisational and population levels

This is one of the issues that the IUR meeting has been working on: how to establish what the impacts of radiation are at an ecosystem level rather than at the individual species level.

An additional area covered this year was that of infrasound, sound waves at a frequency below that of human hearing – as produced by wind turbines.

Professor Alves-Pereira gave a fascinating account of her work with the Portuguese air force. Measuring infrasound using decibels (the conventional way of measuring sound energy) is very misleading, according to the professor. She found that much of the cardiovascular structures became thickened.

“For every two men who get radiation-induced cancer, three women do”

The presence of professor Alves-Pereira prompted physicist Dr John Yelland to come to the conference from the Isle of Wight. His work has enabled four inappropriate wind farm developments to be turned down on the island. Please note: John is not anti-wind energy. He simply wants to see wind farms appropriately sited so that damaging aspects do not affect local communities.

On 24 June, Mary Olson and Tim Mousseau reported on what is happening in the US. Tim showed a slide of the nuclear infrastructure which dominates South Carolina. He has been able to undertake a project similar to that which he has been doing at Chernobyl, putting small monitors on local wildlife. These tools have become cheap enough for local citizen groups to follow suit and carry out monitoring programmes around nuclear power stations which could link with Mary Olson’s project.

John Urquhart originally worked with James Cutler on the production of the YTV programme, The Nuclear Laundry in 1983, when the Windscale leukaemia cluster was first identified… a cluster which had not been found by the nuclear watchdogs of the time.

In Fred Pearce’s gripping new book, Fallout, John gets a mention in despatches for explaining to the New Scientist in 1983 that the 1957 Windscale fire had released an amount of the very toxic isotope Polonium 210 (used to kill Alexander Litvinenko in 2006).

John outlined the case for the Welsh connection, relating figures about childhood leukaemia to genomic instability, where damage is not confined to the person in whom it is caused. Rather, different effects can occur as cells divide in the development of a foetus over a number of generations, making epidemiological work difficult to do

Graham Denman updated the meeting about the Argus Project, a trust that provides data on gamma radiation and weather conditions through a UK-wide network of monitoring stations owned by local authorities, universities, environmental groups and individuals. Graham urged more people to host a station.

There was also a presentation on how the UK is not properly equipped to deal with wastewater created as a result of fracking (using chemicals and high pressure water to extract fossil fuels). Such wastewater needs specialised treatment. A workshop held in Arlington in 2016 established that the costs of such treatment could make shale gas exploitation uneconomic.

That workshop identified more than 140 priority questions where research is needed on the potential environmental impacts of unconventional hydrocarbons.

Dr Jill Sutcliffe has played a pivotal role in developing and organising the International Standing Conference on Low Level Radiation and Health since 1990. She created a centrefold in Peace News in 1976 that explored the issues around nuclear waste. To become an Argus monitoring station host, contact:
graham.denman@gmail.com.