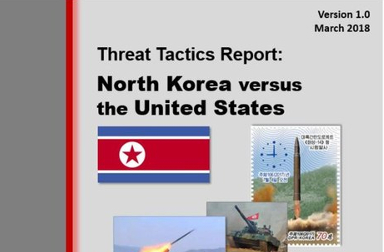 The peace movement should welcome the cancellation of the "provocative" US war games in and around South Korea, argues Milan Rai

The US-North Korea nuclear summit in Singapore on 12 June was met with a wave of criticism and ‘disappointment’ from Western commentators, including from sections of the peace movement.

On the day, there was criticism from Beatrice Fihn, director of ICAN, which won the Nobel Peace Prize last year for its role in securing the Treaty on the Prohibition of Nuclear Weapons. Fihn tweeted: ‘We support diplomacy and peaceful solutions. But there is no agreement on nuclear disarmament and this all looked more like a big welcome party to the nuclear-armed club.... [W]e need actual nuclear disarmament before a bomb goes off.’

In contrast, two South Korean peace activists told me recently how positively they felt about the summit and the process in general. (In Korea, surnames go first, by the way.)

Choi Sung-Hee is an artist who was imprisoned for three months in 2011 for nonviolently blocking naval base construction on Jeju Island. (See PN 2545 for some background.)

I asked her on 23 June how she felt about the 12 June summit. She answered: ‘If you lived in Korea you could feel how it is important for Koreans.... It’s a very historic moment, it’s a very good chance which came through many hardships, many difficulties.’ She added: ‘I think people should not degrade how important it is.’

Lee Min is a member of the People’s Democracy Party (PDP) of South Korea, which grew out of the anti-government candle-lit protests in Seoul in 2016.

Speaking through a translator on 23 June, she described the Singapore summit as ‘very historic’ and ‘very important’, playing ‘a role of reconciliation’ in the relationship between North Korea and the US.

The ‘big outcome’ of the Kim-Trump summit, in her view, was the cancellation of US military exercises, which ‘make a big tension in the Korean peninsula always’. The PDP has held a daily protest in front of the US embassy in Seoul for over 730 days at the time of going to press. (Campaigners on Jeju Island recently marked 4,000 consecutive days of protest against the naval base project.)

The Guardian quoted Beatrice Fihn in its dismissive editorial on the 12 June summit. The newspaper was appalled that US president Donald Trump, after the summit had finished, cancelled US ‘war games’ (Trump’s words) due in August – without getting anything in return from North Korea, and without warning South Korea or the US military in advance.

The Guardian added: ‘Worse, he described them [the military exercises] as “provocative” and “inappropriate”, not just giving the North what it wanted, but suggesting it was right to demand it.’

The Guardian didn’t mention that the twice-yearly US-South Korea exercises (which involve over 10,000 US troops) include practising the ‘decapitation’ of the North Korean leadership, or that the US deploys several nuclear-capable ‘assets’ during the war games: B-1B, B-2 and B-52 bombers, F-22 fighters, and submarines capable of launching nuclear missiles.

No mention either of the September 2017 announcement by the South Korean defence minister of the formation of a special forces brigade (described by officials as a ‘decapitation unit’) that would carry out assaults on the North Korean capital, Pyongyang, under the ‘Korea Massive Punishment and Retaliation’ programme.

One of the most dangerous moments in human history came in November 1983, not long after US president Ronald Reagan described the Soviet Union as ‘the evil empire’ and launched his ‘Star Wars’ missile defence project. There was a NATO exercise called Operation Able Archer which involved 40,000 NATO troops moving across Western Europe, practising war with the Soviet Union.

Able Archer was so realistic that the Soviet Union believed NATO might launch a surprise attack under cover of the exercise. Soviet nuclear weapons were put on high alert on aircraft, on submarines and on land. The USSR was prepared to retaliate quickly – or to pre-empt a US-led nuclear attack just before it happened. The world came very, very close to nuclear war by accident or mistake.

In recent years, US military exercises in and around South Korea (Operations Ulchi–Freedom Guardian and Foal Eagle) have had some frightening similarities with Able Archer. They’ve run the same risk of triggering accidental or pre-emptive attacks on South Korea by North Korea.

In these circumstances, it seems fair for Donald Trump to have said, on 12 June: ‘Under the circumstances, that we’re negotiating... I think it’s inappropriate to be having war games.’

William McKinney, formerly a colonel in the US military and senior country director for Korea in US Pacific Command, commented that the cancellation of the exercises was ‘the most strategically significant confidence-building measure (CBM) that could be made’.

From this perspective, the Guardian was wrong to think of the war games cancellation as ‘something for nothing’. It is better seen as the next step in a chain of (reversible) confidence-building measures.

There’s more of his analysis of the Korea peace process on the PN website, including (soon) full interviews with Choi Sung-Hee and Min Lee.