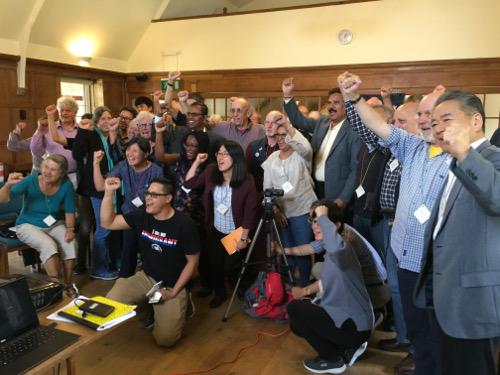 The 26th annual conference of the Global Network Against Weapons & Nuclear Power in Space (GN) was held from 22–24 June at the Friends Meeting House in Oxford.

Will Griffin, Mary Beth Sullivan and I went a week early to Leeds and GN board convener Dave Webb organised talks for us over four nights in different places including Edinburgh. At each event we were asked for our reactions to Donald Trump. Trump was scheduled to visit England in mid-July and protests were planned all over the United Kingdom.

I told people that the one good thing about Trump is that his volatility and his lack of core beliefs will ensure that public opinion around the world will turn against him and the US ensuring the quicker collapse of the US military and economic empire. Our task in the US is to help lessen the impact on people and the environment as the inevitable fall takes place.

During our meeting in Oxford (attended by the most diverse group we’ve ever had), it was decided that the theme for our next annual Keep Space for Peace Week (6–13 October) would be the ‘space force’ that Trump proposed in mid-June as a sixth branch of the US armed forces. We’d like to invite artists to send us design ideas for our space week poster.

Trump’s proposal must still be approved by congress and the US air force is not happy about the idea since they are currently in charge of US military space operations.

There is also the issue of regional competition. Last year, it was a congressperson from Alabama who introduced a space corps bill in congress which would have created a new space body under air force control. (The bill failed.)

Alabama is where the US army’s space and missile defence command is headquartered – at Redstone Arsenal in Huntsville. (This is the place where 100 former Nazi scientists were brought after the Second World War under Operation Paperclip to create the US space programme.) Huntsville is called the ‘Pentagon of the South’ and was the place we held our Global Network annual meeting last year.

US air force space command is located in Colorado Springs, Colorado, and they have a lot to lose if a new separate space force is created. So there is much yet to be determined about how this will all work out.

To Russia with love

During our Oxford meeting we decided to hold our 2019 GN conference in Moscow with a side-trip study tour to Crimea afterward. We don’t have a fixed date yet but will likely go there in the spring (April or May) and would anticipate making the trip about eight days long. One could choose to come to just the Moscow part or the Crimea leg of the journey – or both. We’ll likely take 25 people.

We are deeply concerned about steroidal NATO expansion and US ‘missile defence’ deployments ringing the Russian borders. We feel that citizen diplomacy is needed now more than ever between Russia and the west as a new Cold War is underway and updated weapons technologies make nuclear war more likely than ever. In recent years we have developed some good contacts which make a meeting in Russia possible.

Some of the things we anticipate doing while in Moscow and Crimea include: meeting with military experts; meetings with students, veterans, journalists and activists; cultural experiences and museums; meeting with Crimean Tartar leaders; and much more.

Thanks go to our wonderful hosts in Oxford who made our meeting there a special one. We gave our ‘Peace in Space’ award to the Oxfordshire Peace Campaign in recognition of their steady and important work around the expanding US base at Croughton – a key intelligence, surveillance and war fighting operations installation.

Bruce Gagnon is coordinator of the Global Network Against Weapons & Nuclear Power in Space, which is based in Maine, USA:
www.space4peace.org