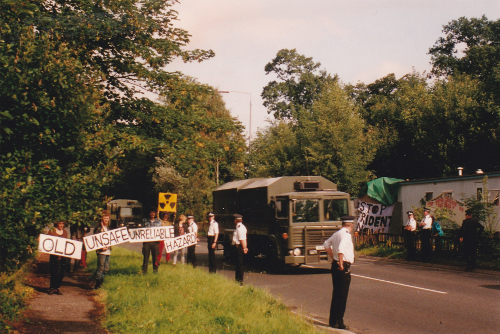 In the mid-1980s, Faslane Peace Campers in Scotland began noticing big military convoys which passed by them on a regular basis. They worked out that these unique vehicles, the strangely-shaped eight-wheeler ‘Mammoth Majors’, were delivering nuclear warheads to the armaments depot at Coulport on Loch Long just over the hill from Faslane.

At the time, there was very little public information about how the warheads assembled at AWE Burghfield near Reading were transported to Scotland where Polaris submarines were based. In fact, the MoD wouldn’t even acknowledge their existence so that as one came thundering along the peace campers always shouted to each other: ‘Convoy, what convoy?’

This was at the same time that Cruisewatchers were dashing about Salisbury Plain tracking down US cruise missile launchers rehearsing for full-scale nuclear war. Faslane Peace Camp worked with people in the CND office in London, and some members of Cruisewatch, to set up a phone tree to pass news of the warhead convoys around the network. Starting out as ‘Polariswatch’, it quickly changed to ‘Nukewatch UK’ after a visit from some ardent US Nukewatchers and also to take account of the anticipated changeover to the Trident weapon system.

Nukewatch has always been clear that we are not campaigning for safer nuclear convoys – we don’t believe they can be truly safe anyway – we want an end to nuclear weapons. But while nuclear weapons are still being transported up and down public roads, we think that people should know about the risks. The knowledge that they are not just tucked up behind a fence at Burghfield or deep out at sea on a submarine but at the end of the street is all the more reason to join the campaign for abolishing them.

In spite of it being before the appearance of mobile phones or the internet, we established that these convoys took three days to make the journey north and we worked out most of their routes and stopping places.

To begin with, the camp didn’t even have a landline and people had to cycle to a phone box to alert the phone tree. Incoming messages were relayed through a very supportive local Strathclyde regional councillor. Eventually we had a phone installed at the camp and then acquired a very early mobile phone that was the size of a small suitcase and plugged into the car battery. Being able to phone in while following a nuclear convoy revolutionised Nukewatching, as stopping to make a call from a phone box along the way often meant we missed spotting when it turned off the road, and lost it.

Throughout the ’80s and ’90s, Nukewatch continued to monitor the movements of convoys and we have a comprehensive log of sightings from 1992 to the present day. However we have also campaigned in various ways to raise awareness about this little-known aspect of the nuclear weapons system. We held ‘Marking the Routes’ days where we drove mock missiles around on our roof racks, released balloons and put up exhibitions and info stalls in some of the small towns along the route.

Nuclear warheads are not just tucked up behind a fence or deep out at sea, they’re at the end of the street.

From the early days of being alerted to an imminent convoy by the van-loads of police lining the peace camp we started to get advance notice from campaigners further south. If a convoy left Burghfield in the morning then it would appear in Dunbartonshire in the afternoon two days later. This meant that the spontaneous acts of getting in front of it and bringing it to a halt that had been going on most times it passed the camp began to be better planned and involved more people.

There were dozens of cunning plans where protesters appeared at the roadside at unexpected spots to bring it to a halt, climb on top of it, lock on underneath it and paint it. After the Kingston Bridge in Glasgow was closed to heavy vehicles in 1994, all convoys had to travel via Stirling so whatever varied routes it used as it travelled north we knew it would eventually appear from the Stirling road into Balloch at the bottom of Loch Lomond and we had a reception waiting.

One action involved three waves of protesters, each arriving just as the police had cleared the last group from on top and underneath it. A large crowd of local people stood cheering as 27 people were arrested and the police had to escort the convoy on foot at walking pace out of the area.

Unlike Cruise convoys, these trucks actually carry live warheads so we have been very aware that any nonviolent direct action should be done in ways that avoid causing an accident. We developed guidelines about where and how a convoy could be stopped in a responsible way. There was no doubt, however, that the publicity following arrests lifted the shroud of secrecy around these convoys.

As the peace movement shrank in the late ’90s, a dedicated network based around Aldermaston Women watching the southern end, and Faslane Peace Camp and Scottish CND covering the north, with some important links along the routes, continued to monitor convoy movements. The MoD upgraded their vehicles and we upgraded our mobile phones.

In 2003, as a result of the increased concerns about potential terrorist attacks, the MoD decided to make the three-day journey into a ‘continuous run’ by having a second crew positioned half-way up the country to take over and therefore do the trip in one go.

This meant the convoy travelled in the dark, but also gave them some other options. For instance, the convoy could travel in the quieter late evening around the usually very busy M74/M8 south of Glasgow. They also stopped having ‘tea breaks’ in lay-bys and headed into military establishments near to the route (often hiding behind buildings). This all made it more challenging to watch for them.

At the same time, Nukewatch was considering how much we wanted to make public the real-time information about convoy movements. We saw a difference between telling people in our community that nuclear weapons were going to be driven through later that day and broadcasting it to the world wide web. Concerns about making it easier for people with less peaceful intentions to interfere with the convoy lead us to keep communications about where the convoy was within our trusted network and only put general information on our website.

However, as social media developed, and more people were posting photos and videos of nuclear convoys on Facebook and Twitter along with often incorrect information, we accepted that, whether we or the MoD liked it or not, the cat was out of the bag and the advantage of seizing this opportunity to campaign could outweigh the risks.

In 2015, Nukewatch took the plunge and started to engage on social media, within certain guidelines – we still don’t report exactly where a convoy is or give expected arrival times for points along the route. It has proved a very useful way of raising awareness of nuclear weapons travelling through communities, especially with people outside our usual sphere who would never read long briefings and reports on our website.

Jane Tallents is the co-ordinator for the Scottish part of the Nukewatch network and a member of Trident Ploughshares. She lived at Faslane Peace Camp from 1984 to 1990. More info: www.nukewatch.org.uk