Noam Chomsky, Who Rules the World? 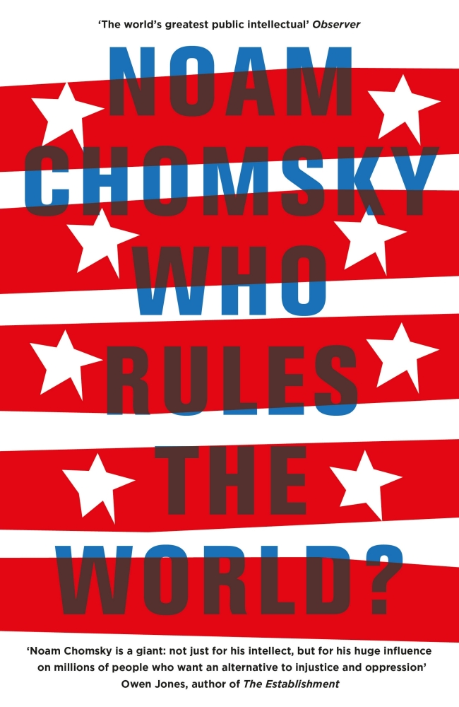 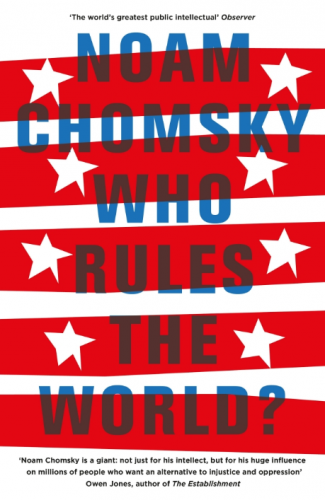 Reviewing Noam Chomsky’s first book in 1969, Robert Sklar wrote in The Nation that the importance of American Power and the New Mandarins lay in its power ‘to free our minds from old perspectives, to stimulate new efforts at historical, political and social thought’.

Chomsky’s latest book, Who Rules the World? is at least as powerful in ‘freeing our minds’. Chomsky is not a sloganeer – in his very first sentence he admits that ‘The question raised by the title of this book cannot have a simple and definite answer.’

For most educated people in Britain and the US, Chomsky’s views are hard to digest. For example, when Chomsky writes that the people in charge of US ‘national security policy’ have rarely been worried about ‘the security of their nation’, that might seem like nonsense that sensible people should not bother to engage with.

But the reason people seek out Chomsky is that he backs up his uncompromisingly honest (and therefore radical) view of the world with huge amounts of hard evidence. That is how he has helped millions of people overturn the propaganda that we would otherwise unconsciously accept.

In the case of US national security planning, Chomsky points out that immediately after the Second World War, the US was by far the most powerful country in the world – economically and militarily. It faced only one potential threat to its territory: ballistic missiles with nuclear warheads.

Chomsky quotes McGeorge Bundy (US national security adviser during the presidencies of John F Kennedy and Lyndon Johnson) who recognised in 1988 that both the US and the Soviet Union might have been much safer from nuclear danger if those missiles had never been developed.

Bundy wrote, in the standard study of nuclear policies: ‘I am aware of no serious contemporary proposal, in or out of either government, that ballistic missiles should somehow be banned by agreement.’ (Danger and Survival, Random House, 1988, p326)

Chomsky comments: ‘In short, there was apparently no thought of trying to prevent the sole serious threat to the United States, the threat of utter destruction in a nuclear war with the Soviet Union.’ (p181)

Chomsky quotes leading US political scientist Kenneth Waltz on a fateful decision: the Kennedy administration ‘undertook the largest strategic and conventional peace-time military build-up the world has yet seen... even as [Soviet leader Nikita] Kruschev was trying at once to carry through a major reduction in the conventional forces and to follow a strategy of mimumum deterrence, and we did so even though the balance of strategic weapons greatly favoured the United States’. (p183)

During the Cuban missile crisis of October 1962, Chomsky notes, the Kennedy administration took hair-raising risks with the survival of the United States (and the world) in order to uphold the principle that the USSR could not station nuclear missiles in a country neighbouring the USA (Cuba), but the USA could deploy nuclear missiles in a state right next to the USSR (Turkey).

In November 1962, after the Soviet missile bases on Cuba had been dismantled, a US-sponsored sabotage team (sent from the US) blew up a Cuban factory, killing 400 workers. Apart from anything else, the attack undermined Soviet faith in the US promise not to attack Cuba, a promise which had been hugely important in de-escalating the crisis.

This and other such terrorist attacks on Cuba raised the risk of ‘catastrophe’, according to respected US historian Raymond Garthoff (pp108–9).

Once again, policy makers had higher priorities than the safety of the homeland.

We see from all this how Chomsky operates: he often uses mainstream sources for the devastating evidence that explodes the mainstream picture of things. No one can accuse McGeorge Bundy or Kenneth Waltz or Raymond Garthoff of being leftist propagandists.

Who Rules the World? covers an enormous number of topics. Chomsky has important things to say about: nuclear weapons, Israel-Palestine (including a brilliant piece on ‘The Real Options’), the Iran crisis, the ‘war on terror’, the ‘first 9/11’ (the US-backed coup in Chile on 11 September 1973), climate change, the Magna Carta (did you know there were two charters?), US decline and the rise of China, and the assassination of Osama bin Laden (on which Chomsky has been scathing).

If you’ve read a lot of Chomsky, you will have seen a bit of this material before. Every Chomsky book, though, contains a treasure trove of new information and new insights that can help us to ‘free our minds’ from the relentless, overwhelming tide of propaganda that swamps the mass media and academia.

As the title suggests, this book is mainly about foreign affairs. I don’t think Chomsky mentions his ‘Propaganda Model’ of the mass media by name. There is one short chapter devoted to taking apart a single edition of the New York Times (6 April 2015), which brings back memories of Chomsky’s ‘Letters from Lexington’, media critiques which he contributed to Lies of Our Times (the magazine, which lasted from 1990–1994, is available online in its entirety).

‘The Responsibility of Intellectuals’ was Chomsky’s first major political essay, published in 1967. It made a fierce attack on the attitudes that underpinned the war in Vietnam.