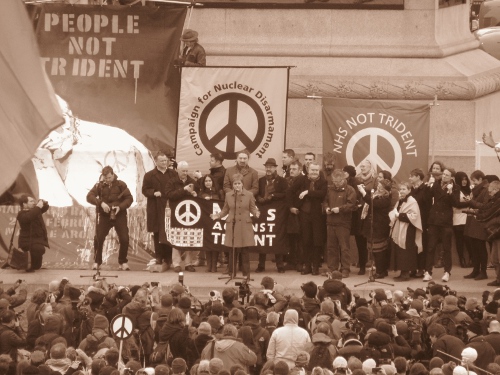 Brexit, Scottish independence and Trident – a plan of action 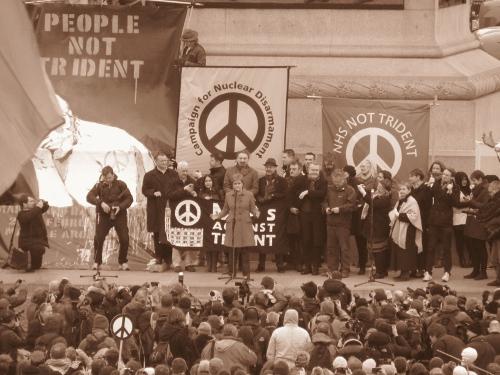 After the Brexit vote the view is suddenly full of huge new sprouting things, like Jack’s overnight beanstalk, but I want to look back a bit to the immediate aftermath of the Scottish parliament elections in May.

In the Scottish Scrap Trident coalition, we noted that the new Holyrood had a marked increase in MSPs belonging to parties opposing Trident and its renewal – up from 55 percent to 72 percent.

At the same, we had picked up from anti-Trident candidates in that election a view of the Trident issue within the Holyrood context that was worrying.

These candidates were saying that neither the parliament nor the Scottish government could do anything about the UK’s nukes beyond mere gestures, and that we had to wait until independence.

Here’s why we were, and still are, a bit worried. Even with the Brexit kick, Scottish independence is very unlikely to happen before 2020.

That’s at the very least four more years in which the UK’s Trident nuclear weapon system continues to define the brutal edge of the state’s relations with the rest of the world.

“Bold, assertive stuff – and smart use of a popular mandate to imagine and maybe partly create the reality of a separate identity.”

That’s four years to give the shambolic Trident renewal project a chance to get its act together and bed in as an accepted fact.

Further, we know what tends to happen when you sit on your complacent hands about an issue. It fades into the background.

Time moves on, folk forget, the counter-arguments are allowed to drift in almost unnoticed, like dandelion weeds, and take root.

Recall also the male activists who told the feminists to shut up and make the tea since all would be well when the revolution came. And what case have you got for independence if you don’t imaginatively use the powers (both moral and constitutional) you already have?

And so the Scrap Trident coalition wrote to all the new MSPs in the anti-Trident parties to urge both parliament and government to act assertively. To date, the response has been underwhelming.

And then Brexit and the Scottish government’s response. First minister Nicola Sturgeon has been prepared, and that publicly, to sweep aside the constitutional niceties and at least try to talk to EU leaders as the PM of a quasi-member state.

Bold, assertive stuff – and smart use of a popular mandate to imagine and maybe partly create the reality of a separate identity.

In that move, a section of a state unregistered at the UN or EU has been able to express a definite alignment in the international field.

Recall that, just before the Scottish independence referendum began, there were voices saying that there was no legal basis for one.

“As with Brexit, acting as quasi-independent facilitates full independence.”

The popular mandate and the political arithmetic soon sent that query into oblivion.

In the Brexit case, there was no question of waiting for independence to line up with the EU. The time is now.

So we are asking: why not Trident next? The parallels are clear. The popular mandate is in fact stronger than the Remain factor, given the Scottish parliament figures above and the almost total domination of the Scottish representation at Westminster by anti-Trident MPs.

As with the European question there is the absolute failure of the UK government to represent the views of Scottish people, since the UK has decided not to take part in the only multilateral disarmament talks in town.

But there is a more significant connection – the business of alignment.

The body of nations that reject nuclear weapons and with which Scotland could potentially align is much greater than the European Union.

There are the 127 nations that have adopted the Humanitarian Pledge to ‘stigmatise, prohibit and eliminate nuclear weapons in light of their unacceptable humanitarian consequences and associated risks’.

There is the overwhelming majority of nations that are taking part in the UN’s Open-ended Working Group on disarmament.

There is the large majority that want to start negotiations in the autumn towards a global ban.

There is an extra failure of representation here.

With that in mind, what the Scottish government and parliament can do is obvious.

Backed by her huge mandate, the first minister could travel publicly to the August round of the UN Working Group and lobby publicly for representation.

The anti-Trident MSPs could support this by an en-masse signing up to the ‘global parliamentary appeal’ from ICAN (the International Campaign to Abolish Nuclear Weapons), which has been signed by more than 800 parliamentarians in 42 countries.

As with Brexit, acting as quasi-independent facilitates full independence.

As with Brexit, the time is now.

It is possible that a Scotland acting with this kind of autonomy could see an end to Trident by a quicker route than by an independent Scotland demanding the removal of the submarines from the Clyde.

We know that the Trident renewal programme has got itself into a complete fankle with planning timescale over-runs, ballooning cost, a shortage of engineers and increased system dependence on the Pentagon.

The clarity given by Jeremy Corbyn to the issue when he said he would not commit mass murder as UK PM, though fading, is still there and resonates so well with the simple focus of the global ban movement on the humanitarian impact.

Who knows what the view of a post-Brexit Conservative government will be as the national budget becomes ever more problematic?

An additional oppositional push from an awkward Scotland could be the very thing to push the tottering edifice over. Let’s hope we don’t miss the chance.

David Mackenzie is a member of the Scrap Trident coalition:
www.scraptrident.org