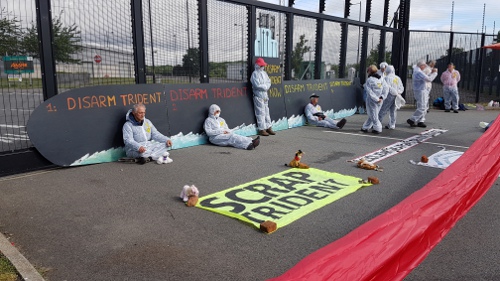 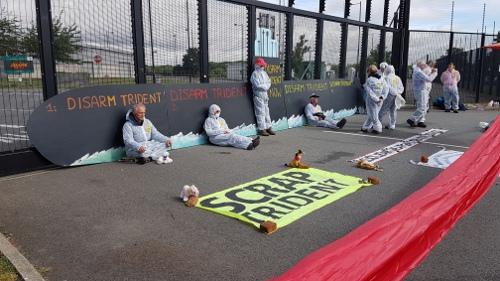 Work to upgrade a key part of Britain’s nuclear weapons infrastructure was dealt a major setback in June, after activists managed to keep the ‘Construction Gate’ at AWE Burghfield closed for a whole month.

Situated a few miles south-west of Reading, Burghfield is where the nuclear warheads on the current fleet of Trident submarines were manufactured. It is also where they are refurbished, being brought back from Scotland by road, at enormous risk to the general public. Should the UK government vote to replace Trident, the new warheads will be built here. Construction work has been in progress to prepare for this – of course, before parliament has made its decision.

It had been envisaged by Trident Ploughshares that June 2016 would see a month of daily actions at Burghfield. But the first day (6 June) brought an unexpected twist when the police decided to take no action against two road-blocks on either side of the Construction Gate entrance.

After several hours in the hot sun, both groups moved into the entrance itself (the intended target), and stayed for what became the first night of a rolling blockade. Hot food was brought over from Reading, tents and tarpaulins were erected, and people took turns to sleep and stay awake to maintain the block.

The words ‘STOP TRIDENT’ were stencilled onto the road. Many people were dressed in red paper suits to indicate a red line and make the link between the military and climate change. Meanwhile, in London, the words ‘Trident is a war crime’ and ‘Stop Trident Replacement’ were projected onto the ministry of defence and the houses of parliament.

A month of creative actions at Construction Gate followed. The Scottish action saw activists parading around in kilts to the music of bagpipes, with a massive green monster, ‘Nessie’, who was presented as the ‘good’ monster, while Trident was the evil monster in the loch. The International group attached ‘Nukes of Hazard’ placards both to the fence and to various posts on the approach roads. The Welsh contingent used cycle locks to attach themselves to a 16th-size replica of a Trident submarine made from panels of plywood.

On one hot day, activists stripped off to highlight the case being brought against the UK government by, erm, Bikini Island and the Marshall Islands, for damage resulting from historic nuclear weapons tests. The sight of topless women and bikini-clad men got more cheers from passers-by than any other action.

To Finland, with love

The entrance to the ‘North Mearings’ road, which leads to Burghfield’s main gate, also saw creative actions. The day after Construction Gate had been taken, activists locked themselves onto a car parked across the roadway, preventing the movement of any other vehicles to this gate. Four activists were arrested, and were supposed to have had their bail hearing on 27 June. That said, three of the four had returned to Finland by that date, with no intention of coming back for court.

On another day, a contingent from London held a ‘Mad Hatters Tea Party’, with people transformed into Hares, Red Queens and playing cards, and eventually sitting down to tea. Banners read ‘Mad to spend £205 billion on Trident’, ‘Mutually Assured Destruction’, and ‘We are mad hatters, they are mad bombers’.

On the final day, around 30 people arrived at various places around the perimeter fence and put up big red Xs to signify a massive ‘NO’ to Trident Renewal. As the day drew to a close, the red paper suits that people were wearing were also pinned to the the fences – a sinister reminder of the ‘shadows’ left behind when the Hiroshima bomb burnt people away, leaving only their shadows on the ground.

Construction Gate remained closed for the whole of June. Even though the camp outside it was all but gone after two weeks, a local contact observed that the gate was still locked and deserted. Officials have admitted that work on the new facilities was delayed. Indeed, it appears that construction workers were told to take the month off, and we can only speculate that they find this preferable to the publicity generated by arrests and trials.

Civil resistance to Trident is needed now more than ever, and we hope that people will form affinity groups in their local area to plan and execute unannounced actions.

2,000 activists block US drones base in Germany