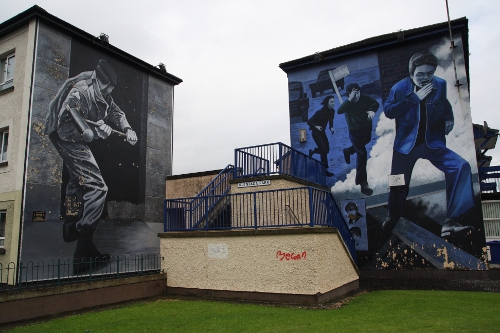 Some republicans, mostly of the dissident variety, voted Leave (or abstained) to spite Britain and because they feel Brexit will speed up the process toward a united Ireland.

“Republicans see the result as an opportunity to press the case for a referendum on whether the North wishes to become part of the Republic of Ireland."

Following the announcement of the result, the Northern Ireland executive, unlike the Scottish government, was slow to respond. It was in the unhappy position of looking both ways, with the largest party, the DUP, supporting Brexit, whereas Sinn Féin was for Remain. Unlike Scotland, it took the two first ministers several days before they could agree on a statement reassuring those from abroad who had made Northern Ireland their home that they were still very welcome here.

Given these differences, it is unwise to predict how the executive will respond when negotiations take place. It is still not clear whether Scotland or Northern Ireland have any real powers to block or impede the negotiations.

Nationalists are likely to pursue an all-Ireland strategy working closely with the Irish government.

What are the likely consequences of Brexit for Northern Ireland?

I do not have a crystal ball and there are a host of uncertainties but these are my observations.

The economic consequences are difficult to predict. The most important consequence to date has been the fall in the value of the pound in relation to the euro. Depending on which part of Ireland you live in, this can have either beneficial or negative implications. For me, the Republic has become a whole lot more expensive. For someone five miles down the road, Northern Ireland is now cheaper.

The consequences for the border are intriguing. Today, the border between Northern Ireland and the Republic of Ireland is an invisible border. The first hint that you are in the Republic, for example, is that distances are in kilometres, and the road signs bilingual. Before the EU, there was a hard border which included customs where you waited until waved through.

Will that return? Possibly, possibly not. It really does depend on what is agreed at the negotiations triggered by an Article 50 notification that the UK is leaving the EU.

Brexit will definitely herald the end of EU funding to the North. The Peace Funds, for example, have played an important part in the economy of Northern Ireland since the Good Friday peace agreement was signed in 1998. EU Peace funding supports a whole bevy of community groups, many of whom have been intimately involved in promoting peace, justice, reconciliation, as well as cross-border activity and economic development.

The EU has also been centrally involved in financing infrastructure projects, especially those which have a cross-border element, such as roads and railways. All that money will end. Of course some maybe replaced by money ‘saved’ by Brexit but it is unlikely it will be anywhere near the equivalent.

Some of the uncertainty thrown up by the referendum surrounds the political implications for the island of Ireland and the ‘peace process’.

In the medium term, it probably will have little effect. Neither the DUP nor Sinn Féin, the two parties which make up the Northern Ireland executive (nor the opposition parties such as the SDLP, UUP, Alliance, Greens) want the institutions to collapse.

At most, it will inject some tension into the executive during the period of negotiations, given the differences between Sinn Féin and the DUP. Afterwards, those differences may continue as the additional monies from Britain in lieu of EU funding are divided up.

Republicans see the result as an opportunity to press the case for a referendum on whether the North wishes to become part of the Republic of Ireland. Ireland, like Scotland, is generally pro-EU and has benefited considerably from its membership.

However, there is a catch. The Good Friday Agreement vests the decision to call such a referendum exclusively in the hands of the British secretary of state who, under the agreement, can call it if convinced a ‘yes to unity’ vote is likely.

Why Sinn Féin and the SDLP ever agreed to such a proviso is surprising. Northern Ireland secretary Theresa Villiers has ruled out such a referendum and nationalist parties can huff and puff as much as they like, with little effect.

But even if the secretary of state was minded to call a referendum, as Sinn Féin has demanded since the EU referendum, it is a huge jump to assume those in favour of unity would win.

The result of the EU referendum may be part of a journey towards unity, as some northern unionists begin to perceive their interests as better served in a united Ireland than within a fragmenting UK – but there is no evidence that this process of change has begun since the EU referendum.

Brexit makes a ‘united Ireland’ more achievable. For this to happen, however, requires further developments fuelled by imagination and enthusiasm across a range of political lines.

Finally, it would be a mistake to view the vote in the North as evidence of Euro enthusiasm. It is not.

Many people in Ireland might be labelled euro-sceptics (without a capital letter). They supported the EU, almost uncritically at times, when the EU was encouraging the economy to become for a time one of the fastest-growing in the world.

Following the 2008 financial crash and the strict conditions imposed by the European Central Bank, there is a degree of hostility to the EU which is probably more pronounced in the South than the North.

It was not that long ago (2007) that Ireland initially voted to reject the Lisbon treaty, so there is a degree of hardheadedness involved which should never be underestimated or ignored.

Robin Percival, a former news editor of Peace News, lives in Derry, Northern Ireland. You can follow him on Twitter:
@RobinPercival2