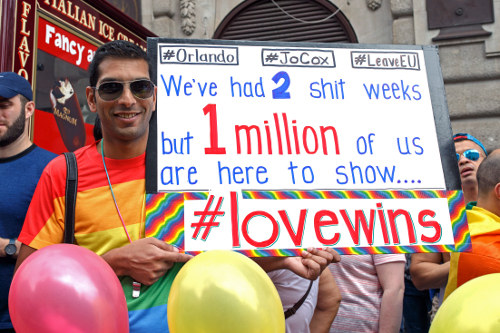 Brexit hasn’t just been a shot in the arm for people on the Right, it’s kicked a lot of Greens, anarchists and socialists into positive action. The vote on 23 June to Leave the EU has energised progressive people in a lot of places around the UK to put renewed energy into tackling racism and economic inequality and nationalism, among other things. We need more of this.

However you feel about what’s happened, there is a wild energy on the loose as a result of the European Union referendum in June. There have been all sorts of gatherings, drawing together people from different political traditions and parties.

We need more of this gathering and thinking afresh together.

One thing that the EU referendum showed us is that if you want to change society in a major way, you need a solid cross-class base of support in which low-income and working-class people feel their concerns and interests are represented. That is what the Leave campaign managed to do, and the Remain campaign failed to do.

Brexit has woken up a lot of middle-class people to the need for action against economic inequality and classism.

Another thing the referendum showed us is the equally urgent need to build anti-racism into all of our campaigning. However important fighting racism may or may not have seemed up till now for your particular cause, what the referendum has shown us is that any big political project can be derailed and defeated if your opponents can mobilise racism against you. Its most toxic and dangerous form right now in Britain is anti-migrant racism.

On the other hand, it’s clear that a large part of the support for Leave was based on a desire to control the flow of immigrants – and part of that desire was anti-migrant racism.

So we need to get a lot better at rooting out racism. Some inspiring examples of successful anti-racist work in majority-white states in the US are described inside this issue. They go beyond the surface. They are more like ‘calling people in’, rather than ‘calling them out’ (publicly condemning them) for their views. (See PN 2590–2591 for more on ‘calling in’.)

In some middle-class Remain circles, you can detect a frustrated, classist attitude that racism is a working-class problem, and the strength of working-class bigotry is why the referendum was ‘lost’.

Actually, there is plenty of middle-class and owning-class anti-migrant racism around as well. The Remain Conservative leadership may have presented a more tolerant face in referendum debates, but it has implemented brutal anti-migrant policies, including its support for the illegal and immoral EU policy of deporting migrants who reach Greece back to Turkey.

White working-class academic Lisa Mckenzie, who researches British working-class communities, argues that the referendum debate in white working-class communities has not been mainly about immigration, despite the rhetoric. She writes: ‘It is about precarity [job and welfare insecurity] and fear. People are concerned for their children and their elderly parents. They’re worried about the lack of public housing, rising rents in the private sector, inadequate education in schools, and low wages.’

I don’t doubt that this reflects the debate that Lisa Mckenzie heard, or that it reflects a lot of what motivated working-class Leave voters. At the same time, this legitimate fear and anger was channelled – by the mass media and by elite politicians – into hostility towards immigrants and the European Union, neither of whom were responsible for the economic decline of the working classes in the last few decades.

That decline came about because of deliberate deindustrialisation, because of cuts in wages and benefits and public services, because of the weakness of trade unions hit by anti-union laws – because of policies carried out by both Conservative and Labour governments.

In the 10 years to 2011, immigrants from Poland and the other nine countries who joined the EU in 2004 paid £5bn more in taxes than they took out in government benefits and services (such as education, health and social housing). Other recently-arrived EU immigrants contributed £15bn more to government income than they drew from benefits and public services. (Over the same period, the ‘fiscal cost’ of British-born natives was over £616bn.)

Immigration has had a class-specific impact on wage rates. Research at University College London found that wages for the lowest-paid 5 percent in Britain have gone down (a little) as the result of immigration – but wages for the best-paid workers have gone up (quite a bit).

At the very bottom of the pay scale, working people have an interest in reducing the inflow of low-pay-accepting workers from the EU. However, as Len McCluskey of Unite the Union argued before the vote: ‘pulling up the drawbridge’ is the wrong answer: ‘The right answer is the same one we used when migrants from Ireland were vilified in the last century; when Jewish immigrants were targeted a century ago; and when Asian and African-Caribbean workers were attacked in the 1950s, ’60s and beyond. That is: strong trade unions delivering the rate for the job, whoever you are and wherever you come from.’

Remain supporters should n0t divert their energies into a second EU referendum or trying to get parliament to block Brexit. Not only are these campaigns doomed to fail, they will not help to defend the rights that are under threat. We have much more urgent and important tasks facing us right now: a much more serious effort to end classism, poverty and extreme economic inequality; and a renewed and sustained struggle to root out racism, especially anti-migrant racism. Simply returning to EU membership will not deal with these colossal problems.

Without making progress on these issues, without making anti-classist and anti-racist work part of all our work, we can’t make the changes that we need to survive as a civilisation. We won’t have the opportunity to become a truly ‘civilised’ society.

Milan Rai is the editor of Peace News and a social justice trainer:
editorial@peacenews.info