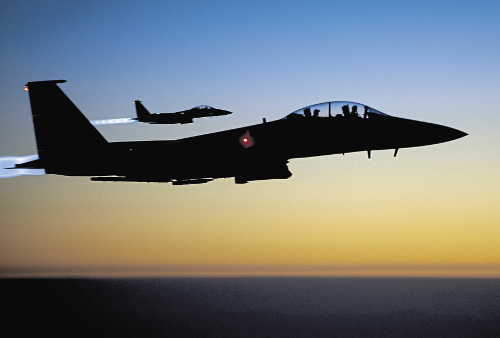 The case against airstrikes on Syria 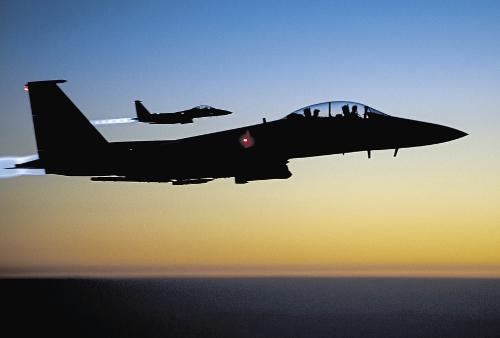 US F-15E Strike Eagles returning from the first US airstrikes on Islamic State targets in Syria, on 23 September 2014. Photo: US air force

On 26 June, Seifeddine Rezgui, a 23-year-old student, murdered 38 people at a beach resort in Sousse, Tunisia. 30 of the dead were British nationals. Subsequent news reports have noted Rezgui received training at an Islamic State (IS – also known as ISIS) base in western Libya.

Speaking to the BBC a few days later, David Cameron argued IS was an ‘existential threat’ to the United Kingdom which required a ‘full spectrum response.’ Building on the prime minister’s inflammatory language, on 1 July, defence secretary Michael Fallon announced the government would likely seek parliamentary support to extend the current UK bombing of IS in Iraq to Syria.

The discussion in the mainstream media about the proposed intervention has been predictably narrow, focusing on questions of tactics and strategy. Will airstrikes be effective? Who will the UK airstrikes help on the ground? Is the Syrian conflict too complex to intervene? These concerns – what could be called the ‘fight the war better’ school of criticism – certainly deserve serious consideration. However, there are a number of important arguments and facts that are conspicuously absent from the ongoing debate taking place within the media and political elite.

Considering the horrifying record of UK military interventions in the Middle East since 2001, it’s extraordinary that further military action is now being seriously considered in Syria. The UK – fighting alongside the US and other allies – has decimated Afghanistan, Iraq and Libya, killing and wounding hundreds of thousands of people and leaving whole swathes of the Muslim world seething with hatred at the actions of the West.

It is widely acknowledged that the US-UK invasion of Iraq in 2003, and the subsequent occupation, played a central role in the creation of IS.

‘We definitely put fuel on a fire. Absolutely’, retired US army general Mike Flynn, head of the defence intelligence agency until August 2014, told Al-Jazeera when asked about the invasion of Iraq and IS.

In August 2014, the New York Times reported that the leader of IS spent five years in a US prison in Iraq ‘where, like many ISIS fighters now on the battlefield, he became more radicalised’. General Flynn agrees that the US prison system in Iraq ‘absolutely’ helped to radicalise Iraqis who later joined al-Qa’eda in Iraq and the group that became Islamic State.

Asked by Al Jazeera English’s Mehdi Hasan if drone strikes tend to create more terrorists than they kill, Flynn, who had a key role in secret US drone operations, replied: ‘I don’t disagree with that’.

Moreover, an expansion of UK airstrikes on IS would be playing into IS’s overall strategy.

With the Sousse attack likely targeting British nationals (the hotel attacked was well known as a British holiday destination, and the gunman ignored local people), Paul Rogers, professor of Peace Studies at the University of Bradford, argues that the attack was an attempt by IS to provoke a response. ‘Its strongest recruiting tactic is to present itself as the one true guardian of Islam under attack from “crusader” forces’, Rogers notes.

The Western attacks on Afghanistan, Iraq, Libya, Pakistan, Yemen and Somalia – and the airstrikes on IS since September 2014 – fit this narrative perfectly. Turning to possible responses to IS, Rogers contends ‘the best advice, as with al-Qaida over more than a decade, is not to do what it wants you to do.’

According to the US military, their air campaign against IS has so far struck over 7,000 targets, killing 1,000 IS fighters every month. However, Rogers notes, IS ‘has not only survived these attacks but in many places is thriving, attracting up to a thousand new recruits from across the region and beyond’. This is because, as Rogers intimates above, the Western airstrikes themselves – which no doubt kill civilians – act as a recruiting sergeant for IS. This was confirmed by James Comey, the director of FBI, who told congress in September 2014 that the US bombing of ISIS in Iraq had increased support for the group.

In a joint bulletin issued that same month to local, state and federal law enforcement, the department of homeland security and the FBI warned that while ‘single events generally do not provoke an immediate response’ from homegrown extremists, ‘we believe these [US air]strikes will contribute to homegrown violent extremists’… broader grievances about U.S. military intervention in predominantly Muslim lands, possibly motivating Homeland attacks’.

"The best advice, as with al-Qaida, is not to do what Islamic State wants you to do."

In terms of self-interest, broadening the UK war on IS to Syria will increase the likelihood of more terrorist attacks on British people – something the government claims it wants to reduce.

Finally, though Cameron’s spokeswoman was quoted by the Guardian as saying that military strikes in Syria would be legal under international law due to the threat posed by IS to the British people, this is almost certainly incorrect.

Marc Weller, professor of international law at the University of Cambridge, dismisses this argument, noting that although the UK ‘might argue that IS represents a manifest threat to their own security’ this is contradicted by Article 51 of the UN Charter which says ‘self-defence only applies to actual or imminent armed attacks, rather than potential or possible attacks.’

There are many actions the UK government could take, short of military action, that would significantly reduce the power of Islamic State, the suffering their rise has caused, and the terrorist threat to the UK.

With the conflict causing a massive humanitarian crisis, the UK should massively increase its support for aid to the region. ‘Quite apart from the humanitarian imperative, there is the risk of greatly increased bitterness on the part of hundreds of thousands if not millions of people displaced from their homes’, Rogers says.

Britain could reverse its policies in relation to Syria. In addition to providing support to the armed rebellion in Syria, Hugh Roberts, the former head of the North African section at the International Crisis Group, recently explained, the US and UK have ‘sabotaged the efforts of the UN special envoys… to broker a political compromise that would have ended the fighting’.

Rather than helping to escalate and lengthen the conflict in Syria, the UK should pressure the key actors to agree a negotiated end to the fighting, which would reduce the chaotic and violent conditions that IS thrives in.

In Iraq, the UK should apply pressure on the Iraqi government to end the sectarian policies it has been pursuing, which have been pushing large numbers of Sunni Iraqis to support IS as a defence against the Iraqi state.

With Rezgui reportedly attending an IS training camp in Libya, the UK should fully support international efforts to stabilise Libya – a chaotic mess allowing jihadis to freely operate, in large part, because of the NATO intervention in 2011.

Dr Lina Khatib, director of the Carnegie Middle East Center in Beirut, notes that Turkey has turned a blind eye to IS freely moving fighters and materials across the Turkish border into Iraq and Syria. As a NATO member largely armed by the West, diplomatic pressure should be applied to Turkey to immediately close the border to IS.

Diplomatic pressure should also be applied to the Gulf states to push them to clamp down on their citizens funding and supporting IS.

Finally, if any external military action is needed to combat IS or to keep the peace, then the UK should push for this to be done under the authority of the United Nations – an organisation that seems to have been forgotten by everyone discussing how to respond to IS. And if UN troops are deployed there should be minimal involvement from the Western nations who have done so much to destablise the Middle East in recent years and create the conditions for IS to grow so quickly.

Of course, the UK government’s geopolitical interests and alliances in the region and beyond mean they are likely to continue to follow their current counterproductive militaristic actions and are unlikely to sincerely implement these alternative non-military policies. And with the Labour Party having signaled they are sympathetic to the government’s proposal there is unlikely to be strong opposition in parliament (though Labour have said they will make their final decision after their new leader is elected in September 2015).

Therefore, it is up to the anti-war movement and peace activists to apply pressure on both the government and the Labour Party to force their hand. In the immediate future there needs to be strong opposition to the proposed UK bombing of Syria, while in the longer-term there needs to be a push for non-military solutions to the wider conflict.

Ian Sinclair is the author of The March that Shook Blair: An Oral History of 15 February 2003, published by Peace News.