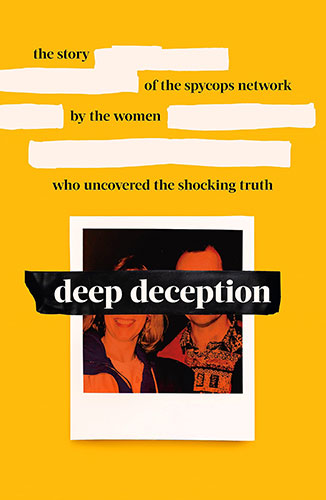 Five women give first-hand accounts of four undercover police spies who targeted them between 1987 and 2010. It is gripping and sickening to learn the extent of abuse that these women – and others – experienced. The format of the book involves short, dated sections from each of the five women, so that their stories are woven together. This can be confusing at times but it keeps the reader’s focus on the progress of their grooming, gaslighting and ghosting – and on their partial victory against the long-term abuse and misogyny of the Metropolitan police force.

Of the five women, Helen Steel is the only one who uses her full real name. This is because telling her story reveals that she is one of the McLibel Two, subjected, along with Dave Morris, to an almost 10-year-long libel case brought by McDonalds.

The monosyllabic first names – ‘Bob’, ‘John’, ‘Mark’ – were the only real things about the spycops. Like many young male activists, they lived in comfortless rooms in short-rent bedsits or shared houses with minimal possessions. But they all had vans. And the vans were important. They were useful resources for activist groups and very handy to offer to take everyone home after a meeting, finding out where they all live.

The Special Demonstration Squad (SDS) manual from 1995 encouraged undercover officers to avoid sexual liaisons, but also said: ‘If you have no other option but to become involved with a weary [activist], you should try to have fleeting, disastrous relationships’.

However, the women that the spies targeted for relationships were carefully selected.

For example, they weren’t freshly out of previous relationships which might have caused problems within activist communities.

Being in a relationship gave the spycops credibility and a foothold into activist communities, as well as state-sponsored sexual pleasure.

Mark Kennedy (who used the surname ‘Stone’) was flashy, claiming that he could afford expensive gear because he was involved with drug-smuggling. He simultaneously targeted three women who all knew each other and were in non-monogamous relationships. If anything, this was even more of a betrayal – as Lisa says: ‘All our relationships were about mutual respect, honesty and trust.’ Early in their ‘relationship’ he pretended to Lisa that he was an expert rock climber. In fact, the first time they climbed a mountain together was the first time that he had ever climbed a mountain.

Several of the targeted women wanted to start families with the men that they assumed were long-term partners. When it came to the legal case against the Metropolitan police in August 2014, the police asserted that the relationships were based on ‘mutual attraction and genuine personal feelings’ – denying any responsibility or liability for the abuse and damage caused. As Belinda said: ‘The relationship was a total violation of me and my life.’

In the case of Helen Steel, cop John Dines targeted her for two years before beginning a physical relationship with her in 1989. Dines’ behaviour became more disturbing and erratic over the next two years until he disappeared ‘to South Africa’ in April 1992.

In November 1991, Steel was preparing for a day in court: ‘On the day of the hearing, John returned and began making placards on the floor. I cleared away some of the mess but John took this as criticism; he blew it up into a massive row. The stress was all too much and I broke down… I really didn’t want to leave the flat and face the world, but the McDonald’s strike out hearing was on at 2pm at the Royal Courts of Justice… If I didn’t go, the case might be thrown out immediately with us being held liable for damages to McDonalds.’

The SDS and its successor, the National Public Order Intelligence Unit, provided support for these cops including false ID, budgets, back-up and counselling so that they could keep their stories straight. The Metropolitan police force enabled them to live fantasy lives with no responsibility for their actions.

The book covers 23 years of spycop activity and 11 years of legal fightback. It is worth noting that the cops’ covers were blown as more information became available online. Here’s hoping that the gruelling legal battle that these brave women have undertaken has led to the end of this particular brand of institutionalised police misogyny.