Ted Parker, A Loose Cannon: tales of a lapsed activist 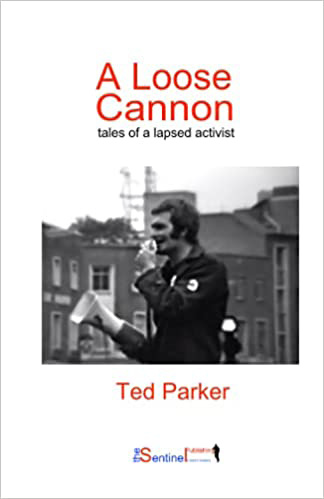 Ted Parker was a working-class boy born in bomb-blasted Folkestone in 1942. His father was an army dispatch rider in the Second World War who died of Hodgkinson’s disease when Ted was eight. His mother was left to bring up two children alone and scraped a living as a cleaner in an army base.

When Ted was 13, she remarried and her new husband bought Ted his first guitar. Folk music and rock’n’roll remained important throughout Ted’s personal and political life. He did not do well at school and at 16 signed up, with his parents’ consent, to a 14-year contract with the RAF.

While a radio apprentice at RAF Locking, Parker met a working-class Manchester lad called Mike McKenna. Mike’s mother was religious and his father was a conscientious objector who read Bertrand Russell to his son. Mike had bought a motorbike on hire purchase, smashed it up, and signed up with the RAF in order to make the repayments.

Mike was a maverick and very persuasive. It was the height of the Cold War and, even within the armed forces, there was debate about nuclear weapons. Initially, Ted was in support of Britain’s nuclear arsenal, but Mike’s arguments and the Cuban Missile Crisis in the autumn of 1962 changed his mind.

In January 1963, Ted and Mike wrote to Peace News asking for anyone interested in joining a CND (Campaign for Nuclear Disarmament) group within the armed forces to contact them. This led to them being court-martialled and sentenced to eight months in prison. They were released after six weeks thanks to the then Labour MP Brian Walden (later a TV presenter).

After release, the two spent the summer working on a CND campaign bus travelling around the South West. Mike went back to Manchester and persuaded Ted to join him there. Ted followed in Mike’s footsteps again and became a student at the London School of Economics from 1966 – 1969.

Mike McKenna changed Ted’s life. Without Mike, Ted would probably have remained in military service for his whole career. Instead, he became a political activist campaigning for CND, joined the International Socialists and was the first student to be recruited to undertake a clandestine mission on behalf of the African National Congress in apartheid South Africa. He also had an important role in the 1977 ‘Battle of Lewisham’ against the National Front.

The second half of A Loose Cannon focuses on Ted’s later career within the further education sector. In his concluding remarks, he is somewhat dismissive of his years as a rebellious activist – which led to the breakdown of his first marriage: ‘Families and communities are the building blocks of a decent society.’

However, I feel that without the experiences of his early life Ted would never have become the gifted teacher and principal which he clearly was. He knew first-hand that educational success was not just to do with intelligence but also about the lottery of upbringing.

A Loose Cannon isn’t a perfect autobiography, but it’s an excellent and engaging account of a fascinating period of history. I enjoyed seeing how a young man with low self-esteem welcomed new experiences into his life and used them to inform a remarkable career supporting younger generations of working-class students.