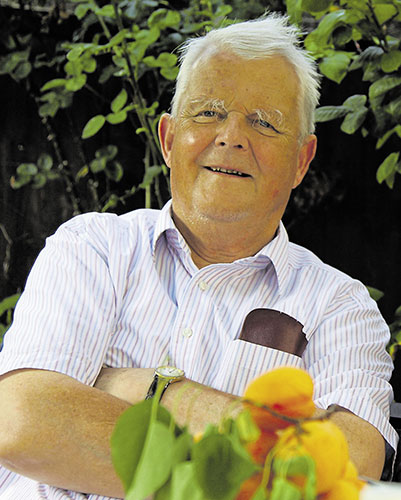 Messages, memories and photographs spanning 70 years have poured in from around the world as people share their stories: ‘Bruce baptised my child.’ ‘Bruce shared a sandwich with me in Euston Station.’ ‘Bruce was only the second person to visit me in prison.’ ‘Bruce spoke at my school and I became an activist.’ And many more.

My own first memory was of meeting Bruce at a peace conference in Sweden in the late 1980s. Too shy to speak to him, I was amazed to discover we were all staying in a very basic hostel. How could one of the most prominent figures in the international peace movement be roughing it with the rest of us?

At first glance, Bruce’s early life seems far removed from that of the last 60 years or so. Born in London, of Canadian parents, he attended Stonyhurst, a Catholic private school. Between 1947 – 1949, he undertook military service with the 6th Royal Tank Regiment. Oxford followed, where he studied at Brasenose college for a law degree.

In 1952, Bruce entered a Catholic seminary for a six-year preparation for the priesthood. While his mother was a devout Catholic, his father, a Presbyterian, disapproved of his choice of vocation.

Bruce served in several London parishes and, in 1966, became chaplain at London University, a post he held until 1974. These experiences provided Bruce with opportunities to hone the skills that stayed with him throughout his life: disciplined time-keeping, meticulous organisation, a clear and simple style of communication.

Whatever role he was in, Bruce loved being with people and listening to their needs. At the same time, his reading of the Christian gospels and the social and moral teaching of the Catholic church informed his world view on issues of poverty, human rights and war.

Bruce was an enabler and mentor, whether that was with organisations or individuals.

As a university chaplain in the late 1960s , Bruce was well placed to direct enthusiastic university students towards the experiential activities of Pax Christi, the international Catholic movement for peace.

Summer walking ‘routes’ and exchanges, hostels offering hospitality to young travellers to England, all with a strong international focus, were key to creating a strong core of young people who would help launch Pax Christi in Britain.

A good number of these people are still active in the movement today.

As well as serving as chaplain to Pax Christi, Bruce served on their international board for several years.

His direct encounter with war was in 1969, when he went with Joint Church Aid on a fact-finding mission during the Nigeria and Biafra civil war. This spurred campaigns to stop British arms sales and, in 1974, the setting up of the Campaign Against Arms Trade.

Black-and-white photographs of Bruce driving through the streets of London in a hired armoured car illustrate his creativity in getting a message across to the public.

Through Pax Christi, Bruce became aware that there were many conscientious objectors (COs) in Catholic countries such as Italy, France, Spain and Portugal. This led him to set up the Conscientious Objectors’ Advisory Team (COAT) to promote recognition of the rights of COs in all countries.

In 1975, Bruce took part in the first Pax Christi pilgrimage to St Radegund in Austria, the birthplace of Franz Jägerstätter, who was executed in Germany in 1943 for refusing to serve in Hitler’s army.

“He carried out an exorcism of a Polaris nuclear submarine with the words ‘From the willingness to murder, Good Lord, deliver us’”

Over many years, Bruce promoted Franz’s witness through talks, workshops, articles and pamphlets. It is not surprising, then, that one of the last public events Bruce attended was the 2022 International Conscientious Objectors’ Day event in Tavistock Square on 15 May.

Already aware of the immorality of nuclear weapons, Bruce joined Christian CND in 1960. In 1975, he carried out an exorcism of a Polaris nuclear submarine at the base in Faslane, in Scotland, with the words ‘From the willingness to murder, Good Lord, deliver us.’

Many more visits, speeches and actions at Faslane followed, more recently in the company of church leaders and politicians – now supporting an anti-nuclear stance!

In the 1980s, Bruce was first general secretary, then chair, of the Campaign for Nuclear Disarmament (CND). This period saw the movement grow to 100,000 national members, nourished by his organisational skills and some risk-taking.

In 1981, he was approached by Michael Eavis, founder of the Glastonbury music festival: ‘I called up Bruce Kent, who was always in the papers, and asked if they [CND] would like to be involved. At the time our image was slightly shabby and I wasn’t totally sure the festival was going to work.... The idea was that they’d help promote us and we’d give them the proceeds and rename it the Glastonbury CND Festival.’

For many years, Bruce was a speaker on the Pyramid stage at Glastonbury, challenging the imagination, energy and campaigning will of thousands of young people.

The slog of peace work, travelling around the country giving talks, undertaking marathon walks to raise awareness of nuclear weapons in Europe, writing articles for the national press, being grilled in interviews, taking part in large public debates, became the norm throughout the 1980s. Bruce brought his humour, his charm and his desire to connect with people to it all.

At the same time, Bruce experienced the pressure of fulfilling his roles as a priest and as a campaigner. In 1987, he resigned from active ministry, but he never left the church. He stated: ‘I simply cannot continue in my present dual role. To do so is to force my superiors into an impossible situation since I cannot offer them the obedience expected.’

He continued with service and support of a huge number of organisations and individuals. While campaigning persistently to get rid of Trident, Bruce was also president of the International Peace Bureau, a key supporter of the National Peace Council, a founder member of Progressing Prisoners Maintaining Innocence, an executive member of the United Nations Association, helping to set up Action for UN Renewal. On top of all this, Bruce also established the Movement for the Abolition of War.

These are just a few of his commitments.

Peace News readers will be familiar with his column, ‘As I please’, which ran until January 2020. With his usual flair for words, he managed to make connections between his admiration for the NHS, the Global Campaign on Military Spending and the enormous contribution of the military to CO2 emissions.

At 90, he said, it was time to pass on the baton to a younger person.

Always, always, Bruce sought to make connections between issues: challenging development agencies to factor in war and the arms trade as a major cause of poverty; establishing the links between climate change and war; speaking out during the wars on Iraq and Afghanistan; challenging the concept of the ‘war on terror’ and its impact on UK society; building relationships with Muslim communities nationally and locally.

Symbols are things that stand for ideas and actions.

Four were placed on Bruce’s coffin: a chalice given to Bruce at his ordination; a well-worn copy of the Charter of the United Nations; a list of names of prisoners whom Bruce was writing to up to his death; and a much-loved and much-read copy of the Psalms.

Much more about Bruce, his life and peace work, as well as many tributes, and a video of his funeral service on 4 July, can be found on his website: www.bruce-kent.com