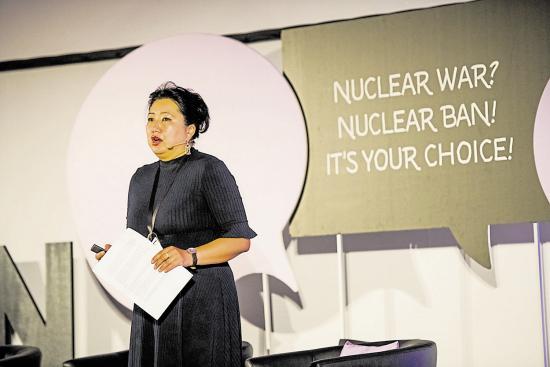 Toghzan Kassenova delivering her speech ‘Deciding Our Fate’ at the Nuclear Ban Forum 2022 in Vienna on 18 June. PHOTO: ALEXANDER PAPIS/ICAN

Togzhan, the author of Atomic Steppe: How Kazakhstan Gave Up the Bomb (Stanford University Press, 2022), used personal testimony and research to set the tone for the week ahead. She went on: ‘We should all be united in reclaiming our agency, deciding our fate, and not letting those who have nuclear weapons hold us hostage.’

The ‘TPNW’ Togzhan was celebrating is the 2017 Treaty on the Prohibition of Nuclear Weapons, the UN's new Nuclear Ban Treaty, which uniquely puts human beings at the centre of its provisions. ICAN, the International Campaign to Abolish Nuclear Weapons, played a crucial role in helping the treaty to come about.

At each stage of its development, the TPNW has faced strong resistance from the nuclear-armed states and their supporters, who see the treaty as a threat to their status quo.

86 countries have signed the treaty and become 'signatories'. Out of that number, 66 have taken the second and decisive step of ratifying or acceding to the treaty, which means they have officially become ‘party’ to the TPNW. The treaty needed 50 ratifications or accessions in order to enter into force, meaning that it has full legal effect for every state that has acceded to or ratified the treaty. The TPNW entered into force last year, on 21 January 2021.

A major step forward in the development of the TPNW was the first official 'meeting of states parties' to the TPNW on 21 – 23 June. This gathering, known as an 'MSP', was seen as a milestone in hammering out exactly how the treaty will work.

ICAN’s weekend Nuclear Ban Forum took place on 18 June, just before the MSP, along with two other major events. The Austrian government hosted the fourth conference on the Humanitarian Impacts of Nuclear Weapons and it also co-hosted (with ICAN) a conference for parliamentarians from around the world who support the TPNW. Both these events took place in Vienna on 20 June.

ICAN’s Nuclear Ban Forum brought together civil society representatives, parliamentarians, academics and activists alike, to discuss and learn about the importance of the TPNW and disarmament as a whole. The forum cultivated a clear sense of community and solidarity between everyone in attendance. Even though participants were approaching disarmament from different perspectives, all were united in the common goal of pursuing the wider ratification of the TPNW.

Immediately after the Forum came the Humanitarian Impact conference, which focused solely on a political analysis of the humanitarian consequences of the use of nuclear weapons. The conference was the fourth in a series. The first three – in Oslo (2013), Nayarit (2013), and Vienna (2014) – contributed strongly to the shift in nuclear rhetoric away from security and onto humanitarianism.

The Humanitarian Impact conferences are staunchly pro-abolition. In the opening ceremony, Izumi Nakamitsu (the UN high representative for disarmament affairs) declared that ‘no state can be adequately prepared to deal with the immediate or long-term consequences of such a humanitarian catastrophe’ as would be caused by the use of nuclear weapons.

For his part, Mohamed ElBaradei, the former director general of the International Atomic Energy Agency, told the opening ceremony that ‘the only way to eliminate the risk is to eliminate nuclear weapons altogether’, adding that disarmament is firstly ‘a moral duty before it is a solemn legal obligation.’

The main event of the nuclear ban week in Vienna was, obviously, the MSP, the first meeting of states parties to the Treaty on the Prohibition of Nuclear Weapons.

Over three days, the implementation details of the treaty were negotiated between those governments that have ratified the TPNW, observer states, institutions such as the Red Cross, and civil society organisations. Through the general exchange of views, the message was explicit: the TPNW is the way forward for nuclear disarmament.

The International Committee of the Red Cross called nuclear weapons ‘inhumane, immoral, and illegal in accordance with conventional International Humanitarian Law’. The Fijian delegation called nuclear weapons ‘a moral aberration… a failure of the most basic choice between life and death.’ The Timorese delegation said that ‘a nuclear war cannot be won, and therefore must never be fought.’ The Cuban delegation stated clearly that ‘nobody can permit themselves the luxury of being indifferent on this matter.’

The general exchange of views also served as a great opportunity to hear observer states’ opinions on the TPNW.

Encouragingly, eight states used their speeches to announce intent to ratify the TPNW as soon as possible, namely Brazil, the Democratic Republic of Congo, the Dominican Republic, Ghana, Indonesia, Mozambique, Nepal, and Niger.

More notable, however, were the speeches from NATO members Belgium, Germany and the Netherlands, and from Australia, Norway, Sweden and Switzerland, who benefit from the ‘nuclear umbrella’ offered by nuclear weapon states. These statements were less supportive of the TPNW, as expected, but the fact that the states were in attendance at all was a huge step towards the universalisation of the treaty.

It was also a step towards nuclear weapons being branded unacceptable by the global community as a whole. The presence of these countries served as a massive show of strength against the dominance of NATO and the alliance’s resistance to disarmament discussions.

The entire week of events in Vienna made one thing absolutely clear: the future of the nuclear debate will be shaped by the TPNW. Alongside those states working towards joining the treaty in the near future, there is an upward trend in support for nuclear prohibition, including from within nuclear-armed states.

For example, Scotland and Wales are against the UK’s nuclear programme, and Australia’s newly-elected government has committed itself to not seeking nuclear weapons, mirroring the hostility to nuclear weapons held by its citizens.

This support for prohibition is backed by increased divestment by major institutions away from nuclear financial funding, a significant indicator of institutional, economic doubt in relation to the legitimacy of nuclear weapons and the future of nuclear proliferation.

The TPNW, supported by the strategic determination and influence of civil society groups and institutions, has begun to change the conversation around nuclear weapons – legally, diplomatically, publicly, economically, and morally.

The MSP ended with a sense of hopefulness and optimism: a landmark has passed that has forever moved the future of disarmament diplomacy into a positive direction.

Nuclear-armed states can no longer rely on their security doctrine as a justification for maintaining their nuclear arsenals; they now have to answer to the humanitarian agenda.

The TPNW puts the reality of the catastrophic humanitarian and environmental impact of nuclear weapons at the heart of the debate – and it offers a co-operative and viable alternative to the politics of violence and destruction.

With the knowledge that this is the legally- and morally-backed strategy for the future of peace and security, these events have increased the confidence and resolve of participating states in pursuing disarmament. Whilst there is still a long way to go to reach a world free of nuclear weapons, the path to get there is clearer than ever before.

Toghzan Kassenova delivering her speech ‘Deciding Our Fate’ at the Nuclear Ban Forum 2022 in Vienna on 18 June. PHOTO: ALEXANDER PAPIS/ICAN

Christina Kelly is an Irish-American human rights and disarmament researcher who works to embolden youth engagement with peace and security.