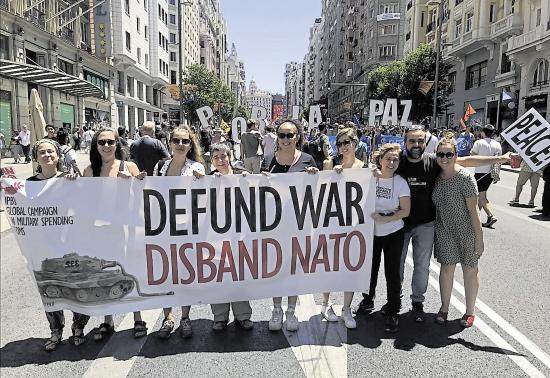 Activists from the Global Campaign on Military Spending (GCOMS) take part in an anti-NATO march in Madrid on 26 June. PHOTO: GCOMS

Peace activists flocked to Madrid before and during the NATO summit in the Spanish capital at the end of June.

There was the biggest anti-NATO march for decades on 26 June, with 30,000 marchers. It was part of the programme of the Madrid Peace Summit, held in the huge, union-owned Auditorio Marcelino Camacho in the city centre.

Sara Herschander reported on Waging Nonviolence that other protests included an XR/Fridays for Future die-in of 30 people at the Reina Sofia museum, in front of Picasso’s painting of the bombing of Guernica. Signs included ‘War is the death of people. War is the death of Art’.

Herschander also reported efforts (using colourful paints) to turn Madrid’s army war school into a ‘School of Peace’ (this led to 29 arrests) and a blockade of the ministry of foreign affairs declaring it ‘closed for criminal activity’.

The NATO summit came days after 37 migrants died while trying to enter Melilla, a Spanish enclave in North Africa. The ‘criminal activity’ the ministry was accused of included increasing military spending for NATO instead of taking responsibility for the tragedy in Melilla and the plight of climate refugees.

At the Madrid Peace Summit, a major report, NATO: Building Global Insecurity, was launched by the Centre d’Estudis per la Pau JM Delàs (JM Delàs Centre for Peace Studies) with the International Peace Bureau (IPB) and the Global Campaign on Military Spending (GCOMS).

NATO: Building Global Insecurity argues that NATO’s involvement in wars as far away as Libya and Afghanistan provides ‘incontrovertible empirical proof of the Alliance’s transformation into an aggressive and imperialist organisation’.

NATO helps to sustain ‘the colonial model of exploitation of the planet and dispossession of the majorities, which are the basis of the climate and environmental crisis’, says the report.

The Madrid Peace Summit’s own final declaration countered the new ‘NATO 360’ strategic concept (which was called ‘a threat to peace’) with ‘Peace 360’: ‘a new security model based on demilitarised shared security in transition towards a zero armament scenario, free of weapons of mass destruction and without US bases deployed around the world’.

There was also a left-wing ‘No NATO, Bases Out Counter-Summit’ at the same time as the Peace Summit, in a church hall outside the city centre.

Activists from the Global Campaign on Military Spending (GCOMS) take part in an anti-NATO march in Madrid on 26 June. PHOTO: GCOMS

The Madrid Peace Summit website contains video of some of the sessions, as well as the Declaration: www.peacesummitmadrid.org