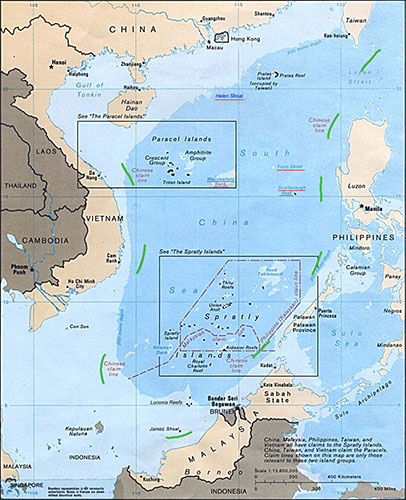 An old CIA map of China/Taiwan’s Nine-Dash Line claims to the South China Sea. We’ve erased the markings saying that Macau belongs to Portugal and Hong Kong to the UK. They’ve both been returned to China. MAP: CIA (PUBLIC DOMAIN)

What happens if we apply a single standard to international behaviour?

What if... North Korea had somehow managed to buy the Cape Verde group of islands (about 400 miles off the coast of Senegal) from Portugal in 1965 for, say, £3m?

What if... the North Korean government had then expelled the population of the biggest island in Cape Verde – in order to lease the island to China for military purposes?

What if... China had then built communications, naval and air bases in Cape Verde from 1975 onwards, constructing two 12,000-foot-long runways, storage for 1.3m barrels of fuel, and quarters for thousands of Chinese sailors and support personnel?

What if... North Korea and China had declared that Cape Verde was outside the terms of the 1996 African Nuclear Weapons Free Zone Treaty?

What if... Chinese intelligence used Cape Verde as an interrogation site for torturing Uighurs and Tibetans ‘suspected of involvement in terrorism’?

What if... China stationed long-range nuclear-capable bombers on Cape Verde?

What if... bombers from that base were used repeatedly to bomb countries thousands of miles away from China, in Africa and South America?

What if... those bombers had a range which meant they were capable of flying all over Europe, over the UK, without refuelling?

What if... those Chinese nuclear-capable bombers ran regular patrols along the Channel and through the Irish Sea?

This story really happened, sort of.

The Chagos Islands in the middle of the Indian Ocean were bought from Mauritius in 1965 for £3m by the British state. The Labour government then began expelling the 1,800 people living there in order to suit the US military.

The US offered a $11m discount on its Polaris ballistic missile submarine in return, a payment that was kept secret from both the British parliament and the US congress.

As part of internal discussions about the Chagos Islands, a British diplomat, Dennis Greenhill, wrote in 1966: ‘Unfortunately along with the birds go some few Tarzans or Man Fridays whose origins are obscure and who are hopefully being wished on to Mauritius.’

By 1973, the Chagossians had indeed been dumped in Mauritius and the British made it illegal for any of them to return to their islands. (There was a British-controlled visit in 2006.)

“Unfortunately along with the birds go some few Tarzans or Man Fridays.”

The islands are still controlled by Britain today, which calls them the ‘British Indian Ocean Territory’.

The largest island, Diego Garcia, is 10 square miles in area. It hosts colossal US military bases, including those two massive runways, a deep-water port and so on.

Southern China is a similar distance from the island to the east. Bombers from Diego Garcia have been flying over the South China Sea regularly since November 2015.

The B-52 was commissioned as a strategic nuclear bomber and remains nuclear-capable. B-52s were used to bomb Indochina during the Vietnam War. They were also used to bomb Afghanistan, Syria and the former Yugoslavia.

Another footnote: you may like to know what actually happened to Cabo Verde/Cape Verde. In reality, the combination of a local independence movement and the Portuguese revolution of 1974 led to the island chain gaining its independence in 1975. A country of half a million people, Cape Verde has an enviable record in terms of democracy and media freedom.

Final footnote: as the map on the previous page shows, China does have a naval base in Africa, its only foreign military base. It was set up in 2017 to help anti-piracy missions in the Gulf of Aden. France, Italy, Japan, Saudi Arabia, Spain and the US also have military bases in Djibouti. There are 400 Chinese soldiers at their base, four miles from the 4,000 US troops at their base.

Diego Garcia is relevant to thinking about Chinese behaviour, and how hard it is to apply to ourselves the standards we demand of others.

These are the waters enclosed by the ‘Nine-Dash Line’ which China draws on the map – it sweeps all the way down to Brunei and Malaysia.

The impression in the media is that the Nine-Dash Line is an example of Communist greed and expansiveness.

In fact, the Communists inherited this claim to the waters of the South China Sea from the KMT government that they overthrew in 1949.

Taiwan, created by the KMT, also claims the Nine-Dash Line waters (because it says it is the government of all China – see p11).

The permanent court of arbitration in the Hague made a legally-binding ruling in 2016 that China’s claims were illegal under international law. They violate basic principles of freedom of navigation and the rights of other states.

The case was brought by the Philippines under the 1982 UN Convention on the Law of the Sea (UNCLOS).

British lawyer Philippe Sands, who acted for the Philippines in the case, points out that another ruling under UNCLOS has been made against Britain – over the Chagos Islands.

However, ‘rather than go or allow the Chagossians to return, Britain has done a China and stuck two fingers up at the rulings and the international rule of law’.

Sands acted for Mauritus when the World Court ruled in February 2019 (in an advisory opinion) that the Chagos Islands had been separated from Mauritius illegally. That £3m purchase was itself a crime, not just the expulsion of the Chagossians that followed.

Three months later in 2019, the UN general assembly overwhelmingly voted for a resolution affirming that Chagos was an integral part of Mauritius and called on Britain to withdraw from the islands by November 2019.

Britain’s refusal to leave led to a case in front of the International Tribunal for the Law of the Sea, in Hamburg, Germany.

In January 2021, this UNCLOS legal body re-affirmed the World Court decision and dismissed Britain’s claims over the islands.

Sands points out that Diego Garcia was mentioned in the British government’s 2021 Integrated Review of security, defence, development and foreign policy.

The Integrated Review said: ‘The armed forces will also maintain a permanent presence in the Falkland Islands, Ascension Island and the British Indian Ocean Territory’ – Britain’s colonial name for the Chagos Islands.

Sands wrote in the New York Times in April 2021: ‘The British government’s position is in direct conflict with the principles it invoked in a diplomatic note to Beijing in September [2020], complaining that China’s claim to having historical rights over areas of the South China Sea violates international law, UNCLOS and the 2016 arbitral award.’

Britain has drawn its own Nine-Dash Line around the Chagos Islands, but only the Chinese are to be condemned for ignoring an unwelcome court ruling.

An old CIA map of China/Taiwan’s Nine-Dash Line claims to the South China Sea. We’ve erased the markings saying that Macau belongs to Portugal and Hong Kong to the UK. They’ve both been returned to China. MAP: CIA (PUBLIC DOMAIN)