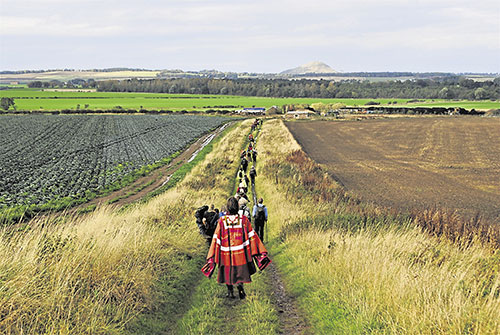 The Keeper of the Soils at the rear of the Pilgrimage for COP26. PHOTO: JONATHAN BAXTER

Jonathan Baxter shares his reflections from a long walk to COP26

After all, the pilgrimage arrived in Glasgow just before COP26 began and, while some of us stayed on to engage with COP26, most of us went home.

First the facts. We walked from Dunbar to Glasgow as a lead-in to the COP26 climate conference last November. We spent 15 days, from 17 – 31 October, as a pilgrim community: walking, talking, learning, and reflecting together on what the climate and ecological crisis means for our lives and the wider world.

A key component of the pilgrimage was learning from the environments we walked through and with. What do we know about these environments, the people and the more-than-human communities that make up their ecology? How have these environments changed through the years – from eroding coastlines to Grangemouth’s expanding oil refinery?

We also learnt from our hosts – the various churches and other faith groups who cooked for us, walked with us, and gave us shelter along the way.

We learnt what it meant to be a pilgrim community: strangers welcomed by other host strangers. The identity of individual pilgrims was also challenged when pilgrim and host encountered one another across different worldviews and discovered in the process an uncommon commonality: you’re not what I thought you were, so I can’t be who I think I am.

A third element of the pilgrimage was its creative framing.

Conceived by a socially-engaged artist and drawing on that experience, each day had a different person guiding the walk and a different theme. The walking guides were selected for their familiarity with the route and their desire to tell a story that integrated local knowledge with themes relevant to the climate and ecological crises.

A case in point was the Musselburgh Lagoons, where the ash residue of a previous power station now forms a regenerative habitat for waders, gulls and terns.

We also walked with soil. Or more precisely, the Keeper of the Soils, an ecological art project conceived by Natalie Taylor and embodied by Natalie and other pilgrims. Pilgrims had the opportunity to put on Natalie’s Keeper of the Soils cape – a woollen cape, dyed with rose madder, stitched and embroidered with imagery representing the ecology of soil.

By wearing the cape, people became the Keeper, responsible for receiving soils and soil stories given by individuals who cared for the soil in a particular area. Other art and craft projects were also woven through the pilgrimage. Poetry and song were our daily staple.

As for the overall framing of the pilgrimage, it was promoted under three headings: l We’re walking to raise awareness of the climate and ecological crisis l We’re reflecting on that crisis as it relates to our own lives, the communities we pass through and the lives of those already impacted; both human and more-than-human l We’re building a community of witness and resistance committed to climate justice now and in the wake of COP26.

If these are some of the elements that informed the Pilgrimage for COP26, how did we absorb them and what did we learn? The answers to this question will be as varied as the pilgrims who walked to Glasgow.

From conversations during and after the pilgrimage – in-person, online, formal, and informal – four words seem to resonate with the pilgrimage experience: ‘hope’, ‘commitment’, ‘community’, and ‘re-connection’. There’s also another word which I want to add to the mix: ‘peace’.

Hope is a complex word. At root it means confidence in the future. Hence the current crisis of hope: how can we hope in a world that is rapidly unravelling from a human point of view. That people on the pilgrimage felt hope was renewed by their experience may seem strange given the political outcomes of COP26 – outcomes that threaten a sustainable way of life for the majority of humans and many other creatures.

“Community as a practice is what it means to be committed.”

How did the pilgrimage galvanise hope?

Signing up to the pilgrimage was, for many, an act of hope. An act, undertaken in the present, which signalled one’s intention to walk in hope. This act of commitment is what constitutes hope. It’s what distinguishes hope from mere optimism. David Gee, in a previous article (PN 2655) and in a recently-published book, refers to this as ‘hope’s work’.

David asks: ‘What are we committed to? What do we really love? …What does this mean for what I do next?’

If hope is future-oriented – while drawing on the past and living fully in the present – then community is a key part of what it means to practice hope.

And this decision to be ecological is what leads to a sense of re-connection. The sense that we are actively involved in something bigger than ourselves; the whole nexus of human and more-than-human relationships that is the world.

Re-connecting in this way also allows us to grieve for what’s been lost; to acknowledge, through mourning, when there are no clear means of restitution. Instead, hope and mourning fuse and our work re-commences. The work of love. The work of politics. The work of climate activism.

This leads me to the fifth word I want to consider: peace. Peace isn’t a word that I heard voiced on the pilgrimage, nor is it a word that people shared in our various post-pilgrimage reflections. But it does resonate with earlier discussions around the pilgrimage – specifically for those involved in previous peace walks.

The point I’d like to mention, here, is that peace, like hope, is a practice. It’s the way we walk in the world.

I’d like to suggest that the Pilgrimage for COP26 modelled an alternative way of being peace, one that re-connected us to the earth (through the specific environments we walked through) and formed us as a porous community; a community of pilgrims who remain unsettled. It short-circuited the power of COP26. We walked in hope before COP26 and we walk in renewed hope after COP26. The pilgrimage we undertook was and is a regenerative journey. We know the facts (as they currently stand). We grieve for what’s been lost. For the rest, we wrestle.

For reasons that I can’t fully develop, here, the experience of walking the pilgrimage has committed me to re-thinking my response-ability for climate migration. How might the projects I’m developing absorb the impact of climate migration by softening the structural violence that climate migration gives rise to?

How can something as innocuous as a community garden become a home for climate migrants?

How can a personal and collective experience of pilgrimage keep on walking?

The Keeper of the Soils at the rear of the Pilgrimage for COP26. PHOTO: JONATHAN BAXTER

For more on the walk, search online for ‘Pilgrimage for COP26’. Jonathan Baxter works across disciplines – both art- and non-art-related – combining the roles of artist, curator and peer-educator, often to deliver participatory art projects and peer-learning programmes: www.jonathanbaxter.me