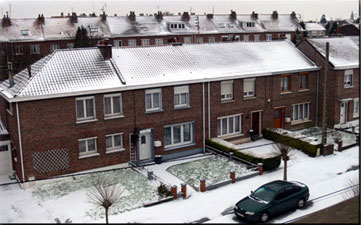 Can community organising force the government to insulate the UK’s leaky homes?

All of the UK’s housing stock ‘zero carbon’ by 2050. Everyone living in well-insulated homes heated by clean, green energy – whether they rent a flat or own a castle. A ‘Great Homes Upgrade’.

That’s the goal of an ambitious community-organising initiative recently launched by the New Economics Foundation (NEF).

This upgrade would improve the lives of millions of households (who would have warmer homes and lower bills). It would also create hundreds of thousands of jobs across the economy and play a significant role in cutting the UK’s greenhouse gas emissions.

Climate wonks have long recognised the urgent need to upgrade the UK’s housing stock. Heating residential properties is one of the major sources of the UK’s greenhouse gas emissions, some 14 percent of which come from our homes.

However, this housing stock is both leaky and draughty, with 70 percent of UK homes falling below a good level energy efficiency rating (an ‘EPC rating’ of C). That’s 19 million of the UK’s 27 million homes.

“64 percent of Conservative voters expressed support for upgrading the UK’s homes to a good standard of energy efficiency.”

Properly insulating these houses is therefore an essential step in tackling climate change. As is replacing dirty fossil-fuel heating, like gas boilers, with clean alternatives like heat pumps. Such measures are collectively referred to as ‘retrofit’.

In a follow-up report in June 2021, the CCC noted that there had been ‘little of the necessary progress in upgrading the building stock’, with insulation rates remaining ‘well below the peak market delivery achieved up to 2012 before key policies were scrapped.’

Indeed, installations of loft and solid wall insulation were ‘only a third of the rate needed by 2021 in the CCC pathway’ for the UK to meet its climate change targets.

In October 2021, the UK government finally published its Heat and Buildings Strategy. This was one part of the government’s explanation of how it intended to make good on its commitment to get the UK to net zero by 2050.

Despite headline-grabbing announcements on heat pumps, when it came to insulation, the Heat and Buildings Strategy mainly recycled already existing policies.

One expert told the Carbon Brief website that, while there was a focus on efficiency measures ‘in the rhetoric’, there were ‘no substantive policy announcements’ on energy efficiency.

Last year, the direct action group Insulate Britain generated a considerable amount of media coverage – including some welcome attention to the issue of home insulation – through its tactic of repeatedly and nonviolently blocking motorways.

The group’s core demand is for a ‘legally binding national plan’ for ‘whole-house retrofit… of all homes in Britain by 2030’. However, it appears to have no credible strategy for achieving this goal.

Possibly, given XR co-founder Roger Hallam’s involvement, the group is labouring under

the false impression that there is some magic number of arrests or jailings that will magically bring about its demand.

In any event, it should be apparent that, by itself, Insulate Britain and its single tactic cannot achieve this goal.

There has been widespread public opposition to Insulate Britain’s tactics. In one mid-October poll, 72 percent of the public opposed their actions; 51 percent ‘strongly opposed’ their actions.

Despite this, there is widespread public support for the creation of a national retrofit taskforce to upgrade the UK’s homes to a good standard by 2030.

Indeed, a September 2021 poll for the NEF, conducted by Opinium, found 65 percent backing for the the idea, with only seven percent opposing it.

“Properly insulating these houses is an essential step in tackling climate change.”

This poll found widespread support for the policy across all genders, age ranges, regions and voting intentions. Even 64 percent of Conservative voters expressed support.

The creation of a national retrofit taskforce is a central demand of the NEF’s ‘Great Homes Upgrade’.

Other demands include: government investment of an extra £11.7bn during this parliament on home insulation and low-carbon heating; tax changes to encourage retrofit; and the provision of cheap finance to enable families to upgrade their homes.

How does the NEF plan to win these huge demands?

So far it has outlined a three-pronged approach:

1. Building pressure on the prime minister by getting MPs, mayors and councillors to champion the campaign’s demands.

2. Somehow backing local councils ‘to get the money they need to upgrade all our homes, starting with social housing’.

The final, crucial, part is:

3. ‘Build[ing] consensus and power in our communities by knocking on every door, and speaking to neighbours and friends’ – block by block, street by street and city by city. The goal is to be in a position by the Spring Budget of 2022, this March, ‘to show the demand for a Great Homes Upgrade right across the country’.

A 22-page ‘Campaign Toolkit’ for the project contains a step-by-step guide to getting a group up and running in your community. It includes template letters to send to councillors and MPs, a template motion for your local council, and a canvassing script for going door-to-door.

It has long been clear that a national campaign focusing on insulation is necessary from both a social justice and a climate perspective.

It holds out the prospect of creating a cross-class campaign that brings together climate and social justice activists.

Over 300 local councils have declared a ‘climate emergency’. The Great Homes Upgrade campaign has the potential to get them actively involved in the struggle to change national policies that are preventing effective local climate action.

This is a campaign that, if successful, would be a win-win for everyone. It could create a stepping stone for tackling the more difficult parts of the climate jigsaw, such as transport.

At the same time, there is the obvious danger that (unless they can be held to account by organised local communities) councils and MPs will merely pay lip service to the demands while doing little to actively champion them.

To date, the initiative has received the backing of Bristol, Cambridge, Glasgow, Leeds, Liverpool and Newcastle city councils as well as Cambridge county council. The Great Homes Upgrade has also received the support of the community-organising group Citizens UK as well as Greenpeace and Medact.

Whether the campaign lives or dies will depend on how many people become involved.

If this all makes sense to you, now’s the time.

Gabriel Carlyle is a member of Divest East Sussex (which is pressuring East Sussex county council to stop its pension fund investing in fossil fuels) and the PN promotions worker.

Sign up to get involved in the Great Homes Upgrade: www.greathomesupgrade.org