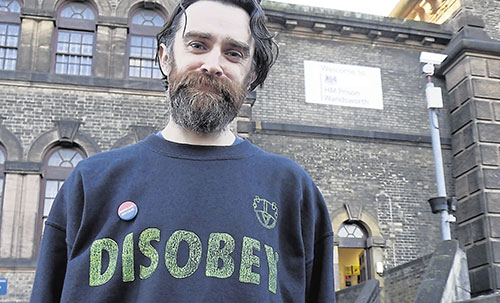 Six climate activists from Insulate Britain (IB) were freed from prison on 14 January after serving their sentences (with time off for good behaviour). The only remaining prisoner from that group was Ben Taylor (27), who had one more month to go.

Louis McKechnie told the Big Issue after his release that the group will be employing different tactics this year: ‘I’m not sure we’ll be returning to the roads as Insulate Britain. However, there will be something new on the cards.’

Another IB campaigner, Dr Diana Warner (61) was also expecting to be released in February, after being imprisoned in December.

Seven other IB activists were surprised to receive only suspended sentences at that 15 December high court hearing after breaching an injunction against blockading the M25 motorway.

The group were ordered to pay the legal costs of National Highways, totalling £39,000.

How could we not?

Speaking from prison on 13 January, the day before his release, architect James Thomas (47) said: ‘People might say, does this kind of civil disobedience actually work? And I would say: well, quite often it doesn’t work. But, quite often it does work and those instances are well-known throughout history. And so, given where emissions are, and given where the clock is, and given where the politics isn’t, how could we not try this?’

Ecologist Emma Smart (44) ended her hunger strike in prison after 26 days – after receiving a letter from her MP, Richard Drax, requesting a visit. The other released Insulate Britain prisoners were: Dr Ben Buse (36), Roman Paluch (28), Oliver Roc (41) and Tim Speers (36).