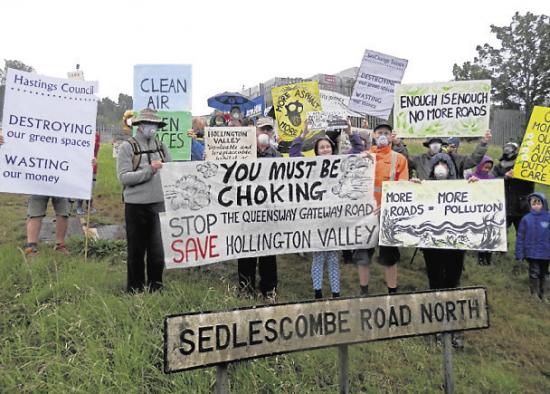 Starting a new series: how a brilliant activist has held a secretive quango to account.

Nine years ago, I was part of a big campaign to stop the Bexhill-Hastings Link Road, a monstrosity of a road that threatened fragile habitats in the service of ‘opening up’ land for development. We were also promised, of course, that it would reduce congestion on the coast road between the two towns – a promise that would be greeted with a hollow laugh by anyone with the slightest knowledge of road-building and ‘induced demand’ (more roads create more traffic).

It was a hard-fought campaign, with protest camps set up along the route of the road in the middle of some of the harshest winter weather we’d seen for years. And in the end, when they’d arrested the last protesters and felled the last ancient oaks, the road was built across our beautiful valley (and we were right: the traffic on the coast road is as bad as ever – but I digress).

In the midst of the campaign, I noticed an article in the local press about a certain John Shaw, CEO of SeaChange Sussex.

Shaw was very keen on the new road, saying it would provide ‘the biggest economic boost to the region in a generation’.

He was less keen on those who opposed the road, saying that our ‘disruptive activities’ were ‘costing millions in security measures, for which hard-pressed local taxpayers are having to foot the bill’. He finished by saying that ‘this is a road to jobs, business success and a more prosperous future for this community. The sooner the county council can get on and build it without interference from a disruptive minority, the better’.

As a fully-paid-up member of the disruptive minority, I was annoyed, but also intrigued: who was this man? I’d vaguely heard of his company, SeaChange Sussex, in relation to various ‘regeneration’ projects locally, but knew very little about it. Time for a bit of digging.

What I found was that SeaChange was the ‘not for profit economic development company’ for East Sussex (although most of its activity is in and around Hastings and Bexhill). What this meant, I was soon to find out, was that SeaChange – a private company – was given millions of pounds of public money to ‘regenerate’ Hastings.

And what did this ‘regeneration’ consist of? In the words of SeaChange’s website: ‘developing a portfolio of prestigious commercial property’.

My bullshit radar was triggered immediately.

Even though it’s in the generally better-off southeast, Hastings has a huge amount of poverty. In 2019, it was the 13th-most-deprived local authority in England.

How was this ‘prestigious commercial property’ going to benefit the people on low wages struggling to pay their rent, the people who couldn’t find a job, the thousands on the council waiting list, the families who couldn’t feed their children?

Was the wealth that John Shaw promised going to fall like a shower of gold onto the heads of the people who needed it locally? It semed highly unlikely.

The more I dug, the angrier I got.

Although all its dubious projects are funded entirely from public money, SeaChange, as a private company, is not subject to any kind of scrutiny.

It is not required to respond to Freedom of Information requests, as a public body is.

You can’t see the minutes of meetings.

You can’t buy a share and go to a shareholders’ meeting to ask awkward questions.

In theory, it’s accountable to the three local councils in its area. Each council has a member on the board.

In practice, in the decade since SeaChange was set up, the councils have never demanded any kind of scrutiny, happy to let the company go its merry way, ‘regenerating’ Hastings via roads and business parks.

This seemed to me utterly outrageous. Public money, zero accountability, swanky buildings and new roads rather than the community-based projects that Hastings so desperately needs.

It was time to start a campaign.