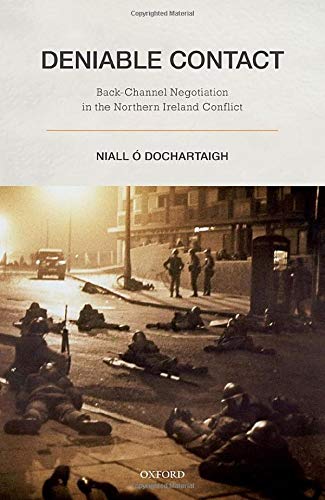 The first camp, which is promoted by a small group of journalists, dissident republicans and by some within the British establishment, claims that MI5 / MI6 infiltrated the IRA, promoted the leadership in Sinn Féin of Gerry Adams and Martin McGuinness and, when necessary, secured the physical removal of those opposed to the emerging Sinn Féin political strategy, which paved the way to the IRA ceasefire.*

In this scenario, Adams and McGuinness were played like fish; indeed might well have been agents themselves.

The other camp argues that the war ended because both sides, the British and the IRA, came to the view that the conflict had reached a position of stalemate and that it served both their interests, as well as the interests of the people of Northern Ireland, to end the conflict with an agreed political settlement.

This new book by Niall ó Dochataigh, a professor at Galway University, is firmly within the latter camp.

Deniable Contact explores the connections between the IRA and the British from the beginning of the conflict to its end. In particular, he examines the role of a Derry business man (Brendan Duddy) who featured heavily in David Beresford’s book about the Hunger Strike, Ten Men Dead, as the IRA’s contact with the MI6 agent known as ‘Mountain Climber’.

On 28 November 1993, a visibly nervous Patrick Mayhew responded in the Westminster parliament to the revelation that the IRA and the British government were in direct contact with each other. Mayhew, secretary of state for Northern Ireland at the time, claimed that he had received a letter from the IRA leadership saying: ‘The conflict is over but we need your advice on how to bring it to a close’.

Deniable Contact confirms that this famous statement was not in fact a message from the IRA but a concoction put together by representatives of the British government and Duddy to push the process forward. Ironically, it was this ‘revelation’ which ended Duddy’s role as a mediator.

Duddy, who died in May 2017, kept detailed records of his work as a mediator, a role he had played on and off from 1972. His records and diaries are now in the possession of Galway University, as are the papers of Ruarí Ó Brádaigh (d 2013) and Dáithí Ó Conaill (d 1991), members of the republican leadership until 1986, with whom Duddy developed a close long-term relationship. It was Duddy’s early contacts with Ó Brádaigh which led to his role as a go-between or back channel.

Deniable Contact covers the contacts between republicans and the British government from the beginning of the conflict to its end (1993).

The first contact between the British and Irish republicans took place in Derry in June, 1972. This meeting Duddy had nothing to do with. It involved Gerry Adams and Dáithí Ó Conaill on the republican side.

There were also several other back channel operators in the early days of the conflict besides Duddy. One was the Fianna Fáil TD (member of the Irish parliament) Dr John O’Connell (d 2013).

Interestingly, it was the British who insisted that the only back channel they would deal with was Duddy.

This is an important book because it reveals an aspect of the history of the peace process which has not been researched or written about before, though Duddy’s role has been in the public domain since Peter Taylor’s BBC documentary, The Secret Peacemaker, first shown in 2008.

Let me identify what I consider to be the book’s headlines.

Republicans were more open to negotiations throughout the conflict than the British. This willingness was there from the beginning of the conflict and remained throughout.

From 1976 to 1990, apart from during the hunger strikes, the British refused to negotiate or have any talks, direct or indirect, with the IRA.

Republicans were prepared to compromise on their fundamental demand for a united Ireland right from the beginning with an awareness that ‘Brits Out’ was unlikely to happen and that there was little chance of an outright IRA military victory.

Deniable Contact reveals the extent to which elements within the British government accepted that the IRA would never be defeated, but would need an agreement to end the war; that there could be no peace without the republican movement.

It outlines some of the fears, stresses and strains which existed within both the British government and the IRA when the peace process began to develop as a real possibility in the 1990s.

The book’s focus is on one man, and this is for a very good reason. Brendan Duddy was first drawn into conversations with the British by the Catholic RUC chief Frank Lagan. [‘Royal Ulster Constabulary’ or RUC was the name of Northern Ireland’s heavily-militarised and unionist police force from 1922 to 2001 – ed]

Duddy, who I first met in an office above his fish-and-chip shop in William Street after arriving to live in Derry in 1972, developed a strong relationship with the then president of Sinn Féin, Ruarí Ó Brádaigh.

Duddy’s involvement with MI6 began with another misleading statement, this one coming directly from him. He contacted Frank Steele of MI6 by telling him: ‘if there is a peaceful way out they will take it’. But this was not a message from the IRA, it was Duddy’s assessment of where the IRA might be, following his initial contacts with O Brádaigh.

Deniable Contact deals with three distinct periods. The first is the back channel negotiations which went on from 1972 to 1976 and which culminated in the 1975 year-long IRA ceasefire. The second runs from 1980 to 1981, the period of the hunger strikes by republican prisoners. The final period is 1991 – 1993.

The book does not add clarity to what happened during the hunger strikes. Political opponents of Gerry Adams and Martin McGuinness now claim that the British in effect conceded the prisoners’ demands but that this was vetoed by those outside the prison who wanted to build up Sinn Féin’s electoral profile. This appeared to be given some support by Duddy when he appeared on a platform with dissident republicans and others alleging the same. The problem is there is some confusion as to what offers were on the table. Verbal messages are always open to misunderstanding.

By 1990, there were other developments happening which superseded, and indeed replaced, the activities of Brendan Duddy. Sinn Féin itself was in direct contact with the Irish government, through Catholic priests based in Ardoyne, and with John Hume of the main nationalist political party in Northern Ireland at the time, the SDLP. This meant then when the ‘war is over’ statement emerged, it was possible for the IRA to close down the contact with Duddy and concentrate on other channels.

The book is a fascinating read but I have some criticisms.

The first has to do with sources. By his own admission, Ó Dochataigh has not been able to access Sinn Féin and republican documents covering the period after Ó Brádaigh and Ó Conaill left the leadership. That awaits another day.

Duddy was certainly an interesting and significant player in the peace process. But he was also a flawed human being and negotiator.

I worked closely with him as a member of the Bogside Residents’ Group to resolve the parading issue in Derry at the end of the ’90s. Duddy and another Derry businessman chaired the talks between ourselves and the Apprentice Boys [a loyalist marching group – ed]. But Duddy stepped out of his role and told the Orange Order [a different loyalist marching group] he could get them a parade in Derry without an agreement with the Residents’ Group. Not surprisingly, the Apprentice Boys were incensed when they heard about this and refused to have any more dealings with Duddy.

That said, this book will be of interest to those concerned about Ireland, and conflict in Ireland, as well as back-channel negotiations generally.

A one-hour book launch of Deniable Contacts is on YouTube: www.tinyurl.com/peacenews3640

* Note from the editor: The name ‘Irish Republican Army’/‘IRA’ has been used by different groups over the decades as armed republicans have fought for Irish independence and unity – and against British colonial control of any part of Ireland. Since 1969, ‘IRA’ has mostly been used to refer to the group that was at first called the ‘Provisional’ IRA – which has always had a political wing, Sinn Féin.