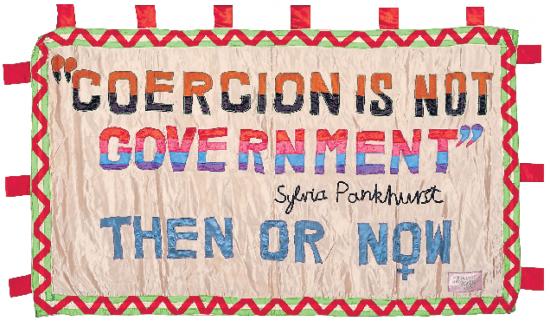 “Coercion Is Not Government”, Sylvia Pankhurst, Then or Now, Thalia and Ian Campbell, 1985, 104 x 183cm. From the collection of the Peace Museum, Bradford. PHOTO: EVA HERZOG.

The eighth of Four Corners’ picture-rich ‘Irregulars’ publications celebrates the powerful heritage of banners produced for and at Greenham Common Peace Camp between late summer 1981 and when the camps were finally disbanded in 2000.

Banners made by one of the Peace Camp founders, Thalia Campbell, often with the help of her husband, Ian, her children, friends and others, are well-represented in this book. Thalia was one of the women on the inaugural march from Cardiff to Greenham Common between 27 August and 5 September 1981.

As soon as she returned from the Peace Camp to her home in Borth, Wales, Campbell started making consistently strong and beautiful banners.

They often referenced Suffragette campaign tactics and were always composed to communicate the messages of the Greenham Women strongly and clearly in press photographs and TV footage. Though the women were often ridiculed in the mainstream media, the footage of the banners made sure that the protesters’ opinions were heard.

This book never pretends to be a comprehensive survey of all the banners at Greenham, but it is a beautiful and entertaining volume and, like the Suffragette banners that influenced Campbell, it is a valuable inspiration for banner-makers today.

“Coercion Is Not Government”, Sylvia Pankhurst, Then or Now, Thalia and Ian Campbell, 1985, 104 x 183cm. From the collection of the Peace Museum, Bradford. PHOTO: EVA HERZOG.